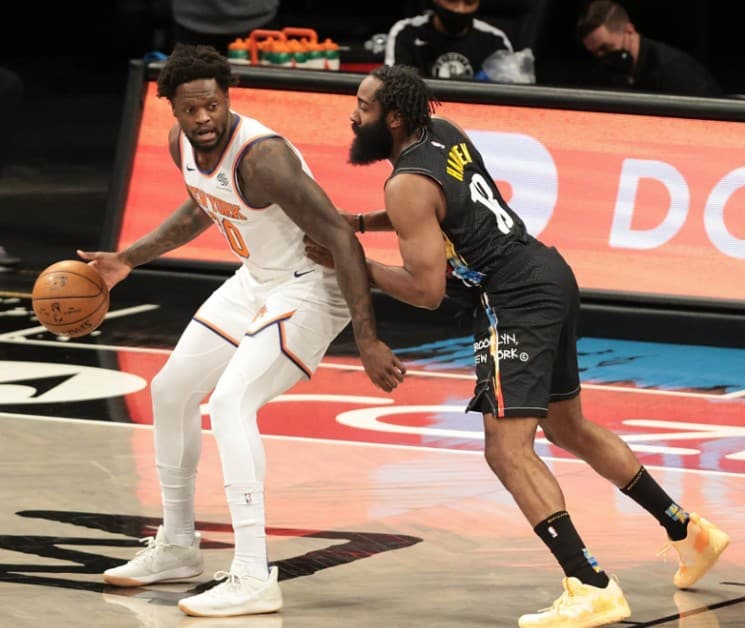 For Tuesday night’s thriller in the Empire State, the New York Knicks (11-9) are aiming to end their three-game, head-to-head skid versus the favored Brooklyn Nets  (14-6). Can Julius Randle and the Knicks earn their first win against the Nets since Jan. 26, 2020?

Heading into tonight’s Eastern Conference clash, the Knicks are 9-11 against the spread in the 2021-22 NBA regular season, whereas the Nets are 8-11-1 against the spread. This exciting event airs live at 7:30 p.m. ET via NBA League Pass and TNT. According to Land of Basketball’s database, based on 202 regular season contests played all-time between these two teams, the current W-L record is tied at 101 games a piece. On Apr. 5, 2021, the last time these teams faced off, Brooklyn won 114-112.

In other news, when Knicks head coach Tom Thibodeau was asked about point guard Kemba Walker being out of the team’s rotation, he said, “I have great respect for who Kemba is as a person and all he’s accomplished in this league.” Eleven-year veteran Alec Burks has officially taken over the starting spot, at least for the time being. Early Tuesday morning, the organization also recalled Miles McBride from the Westchester Knicks, the team’s NBA G League affiliate.

Tom Thibodeau says, at the moment, PG Kemba Walker is not part of the NYK rotation. Says he views Walker as a starter & doesn’t see good fit for Walker off bench. “I have great respect for who Kemba is as a person… & all he's accomplished in this league." pic.twitter.com/O4X3CItepg

Moreover, on Saturday, in the Knicks’ 99-90 road win over the Hawks, guard Alec Burks scored a team-high 23 points in 39 minutes of action. Guard Evan Fournier had 20 points, 2.0 rebounds and 1.0 assist in 29 minutes played, too. On top of the Knicks outscoring them 48 to 38 in the paint, they also won the contest with a total of 10 turnovers.

Meanwhile, in the Nets’ 113-107 home loss against the unstoppable Suns, forward Kevin Durant lead his team in points, with a total of 39 points accumulated in 45 minutes on the court. DeAndre’ Bembry and LaMarcus Aldridge each closed out their performances with 18 points scored as well. While the Nets did out-rebound the Suns 47 to 41, the Suns played better offensively.

Following those aforementioned statistics, the Knicks are 5-10 ATS in their last 15 performances. The total has also gone under in nine of New York’s past 10 games. For other helpful betting trends, the Knicks are 6-1 ATS in their previous seven contests against the Nets. Next, the total has gone under in 11 of their last 13 games played this season, and they are 2-7 straight up in their past nine matches versus Brooklyn. On the other side, the Nets are 1-4-1 ATS in their previous six performances.

It should go without saying that Brooklyn is 4-1 SU in the team’s five games. Also, the total has gone over in five out of their past five contests versus Eastern Conference opponents. Next, the total has gone over in four of Brooklyn’s previous five games played in the month of November. Lastly, they are 1-7 ATS in their past eight matches played against the Knicks at Barclays Center. With everything considered, the Nets should win, but the Knicks will cover the spread.

Pick the Nets to win, New York will cover the spread and the total will go under 216.5. Brooklyn is a 6.5-point favorite with BetUS.