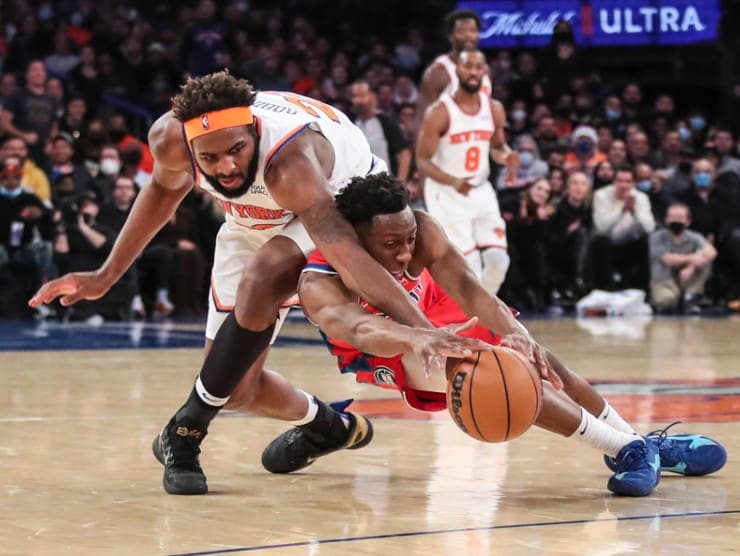 In tonight’s intraconference contest, the New York Knicks (16-18) are facing off versus the Detroit Pistons (5-27) at Little Caesars Arena. Will the below-.500 Pistons pick up their first head-to-head win against the Knicks since Nov. 6, 2019?

Heading into Wednesday night’s Eastern Conference matchup, the Knicks are 15-19 against the spread in the 2021-22 NBA regular season, while the Pistons are 15-17 against the spread. The start time for this mismatch is 7 p.m. ET. This contest can be watched live via Bally Sports Detroit, Bally Sports Indiana, MSG Network, NBA League Pass and MSG+. Referring to Land of Basketball’s database, based on 388 head-to-head regular season games played all-time, New York is 212-176 versus Detroit.

Additionally, the Knicks are a perfect 6-0 against them in their previous six meetings. On Dec. 21, 2021, the first head-to-head meeting this regular season, New York won 105-91 at Madison Square Garden. On another subject, due to the number of COVID-19 positive tests for the Pistons, the organization signed both Trayvon Palmer and Justin Robinson to 10-day contracts. While playing for the Motor City Cruise, the Pistons’ NBA G League affiliate, Palmer averaged 11.1 points, 6.2 rebounds, 2.3 assists and 1.4 steals per game in this season. As for Robinson, in the NBA, the 24-year-old guard is averaging 2.5 points per game.

#Pistons Cade Cunningham, others in protocols, could return this week:https://t.co/97MBHWb4yx pic.twitter.com/fFJrtKVrCi

Moreover, in the Knicks’ 96-88 road win over the Timberwolves on Tuesday, center Mitchell Robinson added another double-double to his career total, finishing his performance with 14 points and 18 rebounds in 32 minutes played. Evan Fournier and Julius Randle each contributed 13 points as well. Randle earned one more career double-double, too, also accumulating 15 rebounds and 2.0 assists in 38 minutes of action.

Plus, New York outscored Minnesota 29 to 22 in the opening quarter. While this was a low-scoring effort, the Knicks did sink 16 three-pointers. And, they out-rebounded Minnesota 54 to 45. Though, they struggled on their close range shots. They shot 37-for-90 (41.1%) from the field. After earning their ninth away win of the season, the team is now 9-7 away, 7-11 at home and 9-7 ATS on the road.

Referencing ESPN’s Basketball Power Index, the Knicks have a 67.2% probability of winning.

Meanwhile, on Sunday, in the Pistons’ 144-109 blowout loss on the road versus the Spurs, forward Hamidou Diallo led his team in scoring, putting up 28 points in 39 minutes spent on the court. Forward Saddiq Bey ended his showing with 23 points, 8.0 rebounds and 1.0 assist in 41 minutes played. In the second and third quarters, the Pistons allowed at least 40 points.

On the other side, the Pistons are 1-17 SU in their last 18 performances. And, the total has gone over in eight of their past 11 games. Also, Detroit is 1-7 SU in the team’s previous eight contests played at Little Caesars Arena. Next, the Pistons are 7-3 ATS in their last 10 matches versus Eastern Conference opponents. Taking these trends into account, contemplate picking the Knicks to win and cover the spread. If you are aiming to improve your success rate as a sports bettor, read our handicap betting guide.

Pick the Knicks to win, they will cover the spread and the total will go over 208. New York is a seven-point favorite on the road with BetOnline.