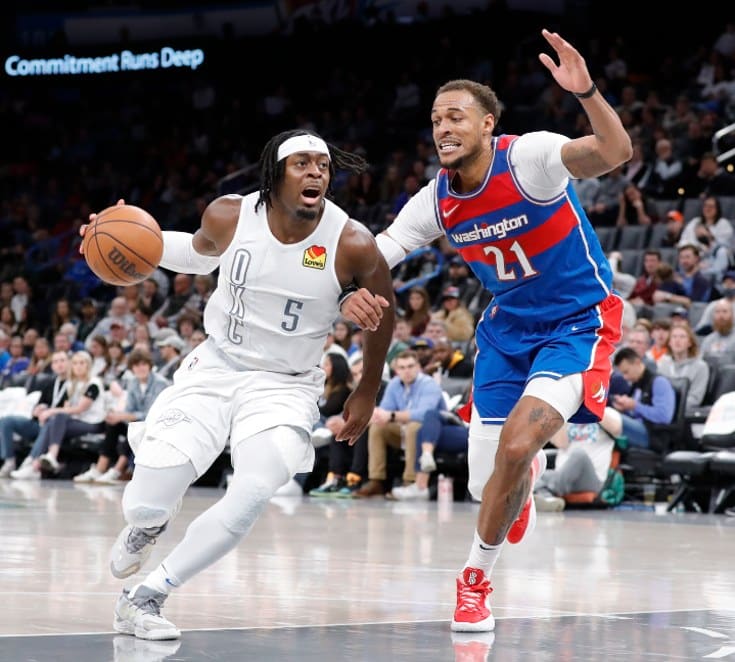 In tonight’s interconference mismatch, the Oklahoma City Thunder (13-26) are playing the Washington Wizards (20-20) at Capital One Arena. Will Josh Giddey and the Thunder end their four-game skid?

However, in the past three head-to-head meetings, the Wizards are 2-1 against them. On Nov. 26, 2021, the first meeting of this regular season, Washington won 101-99 at Paycom Center. Pertaining to the latest NBA trade rumors, the Wizards are interested in trading for Pistons forward Jerami Grant. In a total of 24 games played this season, Grant has averaged 20.1 points, 4.8 rebounds and 2.6 assists per game. The eighth-year player is also shooting 41.4% from the field. Grant was last traded in his career by the Nuggets to the Pistons on Nov. 22, 2020.

5 thoughts on the Wizards' reported interest in trading for Jerami Grant https://t.co/W5J9YRoHs1

Moreover, in the Thunder’s 99-95 home loss versus the Nuggets on Sunday, forward Luguentz Dort led his team in scoring, closing out his performance with 14 points in 28 minutes spent on the court. Forward Jeremiah Robinson-Earl contributed 12 points, 4.0 rebounds and 2.0 assists in 26 minutes played as well. While this was only one game, the Thunder’s number one problem this season is the team’s inability to outscore their opponents. In other words, they need more talent.

Referencing ESPN’s Basketball Power Index, the Wizards have a 64.4% probability of winning.

On the other side, on Sunday, in the Wizards’ 102-100 away win over the Magic, forward Kyle Kuzma added one more double-double to his career total, accumulating 27 points, 22 rebounds and 1.0 assist in 38 minutes on the court. Guard Bradley Beal ended his performance with 20 points, 6.0 rebounds and 7.0 assists in 37 minutes played. In the fourth quarter, Washington outscored them 35 to 29.

Moving on to intriguing betting trends, the Thunder are 4-1 ATS in their last five performances. They are also 1-6 straight up in their past seven games. Next, Oklahoma City is 1-5 SU in the team’s previous six matches versus Washington. And, the Thunder are 5-12 SU in their last 17 contests when playing on the road against the Wizards. Lastly, the team is 7-0 ATS in their past seven games against Eastern Conference opponents.

As for the Wizards, they are 6-12 SU in their previous 18 performances. Not to mention, the total has gone over in six of their last nine contests. Next, Washington is 2-5 SU in the team’s past seven games played at Capital One Arena. Also, the total has gone over in 14 of their previous 20 contests played in January. Ultimately, think about picking the Wizards to win and cover the spread. If you want to learn more about sports betting, read our handicap betting guide.

Pick the Wizards to win, they will cover the spread and the total will go under 217. Washington is a nine-point favorite at home with BetOnline.