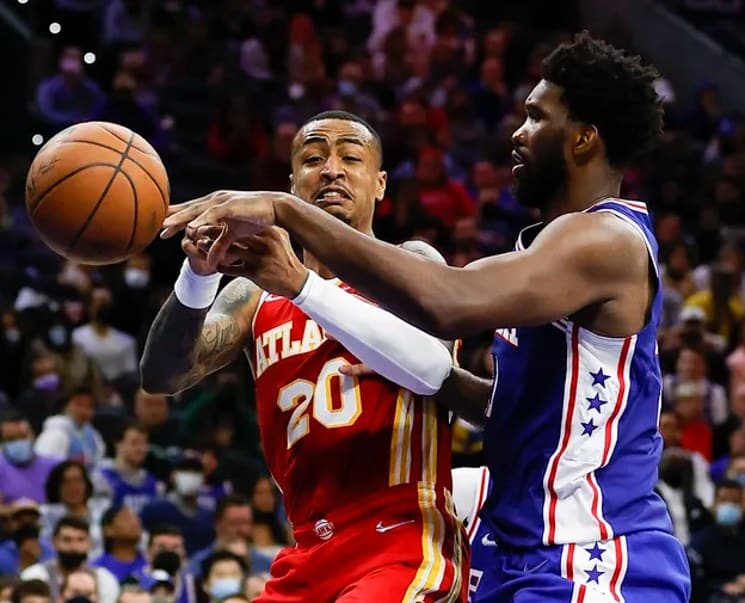 In tonight’s Eastern Conference meeting, the Philadelphia 76ers (11-11) are aiming to claw their way back to an above-.500 record this season versus the Atlanta Hawks (12-10). Can Trae Young and the Hawks win their first game against the Sixers since Jan. 11, 2021?

Leading into Friday night’s intraconference matchup, the 76ers are 11-11 against the spread in the 2021-22 NBA season, while the Hawks are 10-12 against the spread. This game will air live at 7:30 p.m. ET via Bally Sports Southeast, ESPN, NBA League Pass, ESPN Deportes, NBC Sports Philadelphia and ESPN2. Referencing Land of Basketball’s database, based on 388 games played all-time head-to-head, Philadelphia is 197-191 versus Atlanta. On Oct. 30, their first meeting of the regular season, the 76ers defeated the Hawks 122-94.

Thus far, Hawks point guard Trae Young has scored at least 30 points in five consecutive games, which is the longest scoring streak in the league this season. This accomplishment ties a career-high for most points scored in several back-to-back performances for the fourth-year player. Through twenty-two games played this season, Young is averaging 26.3 points, 3.8 rebounds and 9.1 assists. The fifth overall pick of the 2018 NBA Draft is also shooting 46.6% from the field.

Young has now scored 30-or-more points in five straight games, the longest 30+ scoring streak in the NBA this season.

#Sixers PF Tobias Harris is not at this morning’s shootaround. He’s under the weather. His illness is non-Covid related.

Moreover, in the 76ers’ 88-87 road loss versus the Celtics on Wednesday, guard Seth Curry scored a team-high 17 points in 36 minutes on the court. Shake Milton ended his performance with 16 points, 2.0 rebounds and 1.0 assist in 22 minutes played, too. In this low-scoring affair, the teams were identical statistically. However, one big game-changer was perimeter defense.

Philadelphia allowed Boston to sink 11 three-pointers. In addition to their slacking defensive performances, the 76ers shot 33-for-89 (37.1%) from the floor and 8-for-31 (25.8%) from behind the arc. The team certainly could have used Ben Simmons this season, but that’s one can of worms the fans want remained sealed. Anyways, after this loss, the Sixers are 5-5 at home, 6-6 away and 8-4 ATS on the road this season.

Meanwhile, on Wednesday, in the Hawks’ 114-111 road victory over the Pacers, guard Trae Young earned another career double-double, finishing his performance with 33 points, 8.0 rebounds and 10 assists in 37 minutes of action. Despite getting outscored 52 to 38 in the paint, the Hawks nailed quite a few long-rang jumpers.

For intriguing betting trends, the 76ers are 4-8 ATS in their previous 12 performances. The total has gone under in four of their last five games. Not to mention, the team is 3-9 straight up in their past 12 contests versus the Hawks. Next, Philadelphia is 2-7 ATS in the team’s previous nine matches on the road at State Farm Arena. Finally, the total has gone under in six out of their last eight games this season, and they are 14-6 SU in their prior 20 meetings versus Southeast Division opponents.

Looking to bet on the Hawks? Then you should check out our guide on sports betting in Georgia where we have compiled a list of the best sportsbooks in the state.

As for the Hawks, they are 7-2 ATS in their last nine performances. In addition to the total going over in four out of their previous five games, they are 8-1 SU in their past nine contests. Next, the Hawks are 5-1 SU in the team’s last six home contests, and the total has gone over in 10 out of Atlanta’s previous 14 games played on a Friday. In short, consider picking the Hawks to win and cover the spread.

Pick the Hawks to win, they will cover the spread and the total will go over 215.5. Atlanta is a one-point favorite with BetUS.