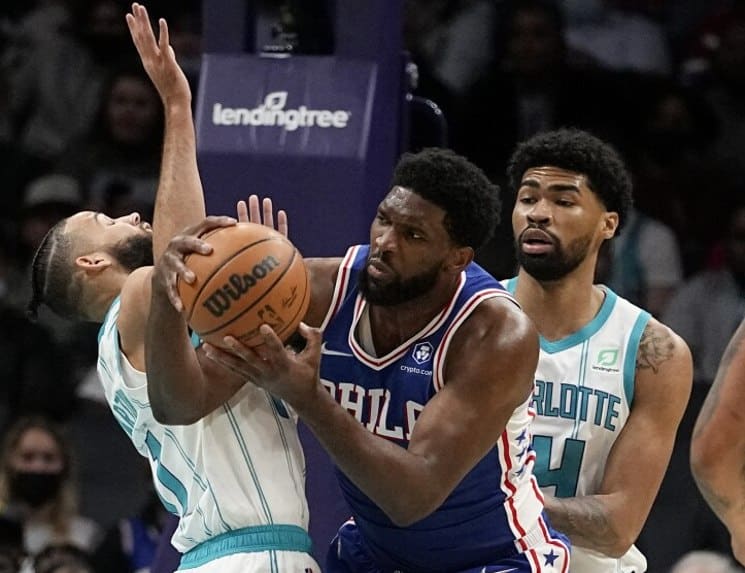 In tonight’s intraconference clash, the Philadelphia 76ers (13-11) are facing off versus the Charlotte Hornets  (14-12) at Spectrum Center. Despite missing several players due to COVID-19, can the Hornets end their 15-game skid against the 76ers and win their first head-to-head game since Nov. 2, 2016?

Heading into Wednesday night’s Eastern Conference matchup, the 76ers are 12-12 against the spread in the 2021-22 NBA season, while the Hornets are 15-11 against the spread. This interesting rematch will air live at 7 p.m. ET via Bally Sports South, Bally Sports Southeast, NBA League Pass and NBC Sports Philadelphia. According to Land of Basketball’s database, these two contenders have played one another 113 times in the regular season all-time. Charlotte is 58-55 versus Philadelphia. On Monday, with a final score of 127-124, the 76ers defeated them in overtime.

In Monday night’s loss to the Sixers, Hornets forward Kelly Oubre Jr. finished his third consecutive game with at least 25 points. This is only the second time in his seven-year career he has scored 25 points or more in back-to-back performances. His other three-game streak began on Dec. 19, 2019 and ended on Jan. 3, 2020. Oubre Jr. is averaging 16.5 points, 3.9 rebounds and 1.1 assists per game this season. And, he’s shooting 46.6% from the field.

No change in the #Hornets injury report for tomorrow. LaMelo, Terry Rozier, Mason Plumlee, Jalen McDaniels and Ish Smith all remain in health and safety protocols and are out against the Sixers.

Furthermore, in the 76ers’ 127-124 overtime road win over the Hornets on Monday, center Joel Embiid ended his performance with another career double-double, finishing with 43 points, 15 rebounds and 7.0 assists in 41 minutes played. Forward Tobias Harris added one more career double-double as well, closing out his effort with 21 points, 11 rebounds and 4.0 assists in 41 minutes spent on the court. In the second quarter, the Sixers outscored the Hornets 44 to 28.

While Charlotte did outscore Philadelphia 58 to 46 in the key, the Sixers displayed a hard-fought victory against an undermanned opponent, at least talent-wise. In other words, the 76ers were supposed to defeat them. Following this win, the team has won five out of their past 10 games. They are 5-5 at home, 8-6 away and 9-5 ATS away this season. As stated above, Philadelphia is on a 15-game win streak versus Charlotte.

As for the Hornets, on Monday, in their overtime loss to the Sixers, guard Kelly Oubre Jr. scored a team-high 35 points in 43 minutes of action. PJ Washington and Miles Bridges each accumulated 16 points, too. Even a casual NBA enthusiast could see while watching this game that Charlotte was missing important starters. Though, numerous folks were not expecting the Hornets to put up this big of a fight.

For noteworthy betting trends, the 76ers are 2-4 ATS in their last six performances. The total has also gone under in five of their past seven contests. Additionally, the total has gone under in seven of their previous eight matches against Southeast Division opponents, and the Sixers are 4-1 ATS in their last five games played in the month of December. Next, Philadelphia is 10-4-1 ATS in the team’s past 15 games played versus Charlotte.

On the other side, the Hornets are 10-4 ATS in their previous 14 games this season. To add to these betting statistics, the total has gone over in the team’s prior six performances. Also, the total has gone over in seven of Charlotte’s last eight matches against Philadelphia. Next, they are 4-11 straight up in their preceding 15 games versus Atlantic Division opponents. In summary, contemplate picking the 76ers to win, but the Hornets will cover the spread.

Pick the 76ers to win, the Hornets will cover the spread and the total will go over 215.5. Philadelphia is a six-point favorite with BetUS.