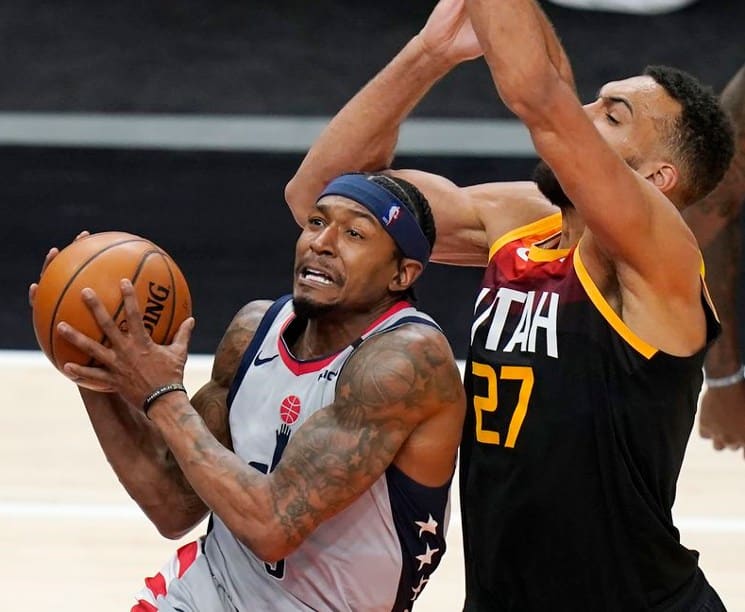 In tonight’s interconference matchup, the Utah Jazz (18-7) are facing off versus the Washington Wizards (15-11) at Capital One Arena. Will Bradley Beal and the Wizards snap the Jazz’s six-game win streak?

Furthermore, for Saturday night’s contest, the Jazz are 14-11 against the spread in the 2021-22 NBA season, whereas the Wizards are 12-13-1 against the spread. This game will air live at 7 p.m. ET via AT&T SportsNet Rocky Mountain, NBA League Pass, NBC Sports Washington and Root Sports Northwest. According to Land of Basketball’s database, these two contenders have played one another 108 times during the regular season all-time. Utah is 58-50 versus Washington.

Besides all-time records, in the past three head-to-head meetings, the Wizards are 2-1 against the Jazz. On Apr. 12, 2021, the last time these teams met during the regular season, Washington won 125-121. Anyways, during the fourth quarter of the Wizards-Pistons matchup on Wednesday night, forward Kyle Kuzma was shown displaying an obscene gesture to a Pistons fan. This incident occurred with 9:34 remaining in the fourth quarter at Little Caesars Arena. Yesterday, the league office fined him $15,000.

Wes Unseld Jr said Rui Hachimura will travel with the Wizards on their upcoming road trip out west.

Unseld is hoping team can get Hachimura some contact work and into some 5 on 5 in the next week.

Additionally, on Thursday, in the Jazz’s 118-96 road win over the Philadelphia 76ers, guard Donovan Mitchell scored a team-high 22 points in 29 minutes on the court. Center Rudy Gobert ended his performance with another career double-double, accumulating 17 points, 21 rebounds and 1.0 assist in 29 minutes played. In the second quarter, the Jazz outscored the Sixers 34 to 22. Plus, they out-rebounded them 52 to 34.

Per ESPN’s Basketball Power Index, the Jazz have a 73.3% chance of winning.

As for the Wizards, in their 119-116 overtime road win versus the struggling Pistons on Wednesday, forward Kyle Kuzma led his team in scoring, amassing 26 points in 39 minutes of action. Likewise, guard Bradley Beal closed out his performance with 25 points, 6.0 rebounds and 3.0 assists in 43 minutes played. But did the Wizards really need overtime to defeat this four-win team? In the third quarter, despite scoring 37 points, Washington allowed 26 points as well.

Detroit outscored Washington 31 to 25 in the second quarter, too. This is considering the fact that the Wizards out-rebounded the Pistons 45 to 37, and the team held Detroit to 38 points in the free throw lane. On the positive side, at least this road win ended their three-game skid. The Wizards have won four out of their last 10 games. They are now 7-8 away, 8-3 at home and 8-3 ATS at home this season.

On the other side, the Wizards are 2-7-1 ATS in their last 10 performances. Also, the total has gone over in four of the team’s prior five contests. And, the total has gone over in the previous five matches against Utah. Next, the Wizards are 14-4 straight up in their last 18 games played at Capital One Arena. In summary, weigh up the likelihood of the Jazz winning and covering the spread. If you are searching for handicap betting advice, check out our guide here at Basketball Insiders.

Pick the Jazz to win, they will cover the spread and the total will go over 213. Utah is a 5.5-point favorite on the road with BetUS.