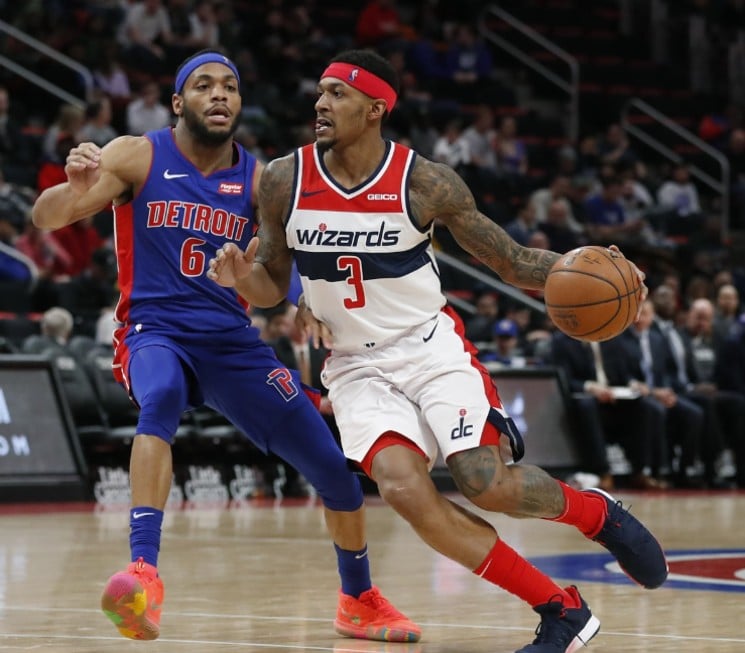 For Wednesday night’s Eastern Conference battle, the faltering Washington Wizards (14-11) are preparing to play the talented, yet dreadful Detroit Pistons (4-19) at Little Caesars Arena. Will Bradley Beal and the Wizards snap their three-game losing streak against this young team?

For a brief betting record comparison, the Wizards are 12-12-1 against the spread in the 2021-22 NBA season, whereas the Pistons are 11-12 against the spread. This game will air live at 7 p.m. ET via Bally Sports Detroit, Bally Sports Indiana, NBA League Pass and NBC Sports Washington. Per Land of Basketball’s database, based on 291 regular season games played all-time between these two Eastern Conference teams, Detroit is 157-134 versus Washington. Plus, on Apr. 17, 2021, the last time these teams faced off, the Wizards won 121-100.

After the Pistons’ 114-103 home loss against the Thunder, rookie guard Cade Cunningham became the 11th rookie in franchise history to finish with at least 20 points, 10 rebounds and 5.0 assists in a single game since Greg Monroe from the 2010-11 season. Cunningham is also the first rookie to finish his performance with five three-pointers made in the same game. The first overall pick is averaging 14.9 points, 6.6 rebounds and 4.6 assists per game this season.

Davis Bertans is listed as questionable for tomorrow's game with gastroenteritis, the Wizards announce.

Moreover, on Monday, in the Wizards’ unexpected 110-116 road loss versus the Pacers, guard Bradley Beal led his team in scoring, putting up 34 points in 39 minutes spent on the court. Kyle Kuzma and Daniel Gafford each contributed 14 points as well. Not only did Indiana outscore Washington 64 to 58 in the paint, the team out-rebounded them 40 to 30. This is their first three-game losing streak of the season.

Meanwhile, in the Pistons’ 114-103 defeat at home against the Thunder rookie, guard Cade Cunningham earned a double-double, ending his showing with 28 points, 11 rebounds and 5.0 assists in 36 minutes played. Forward Jerami Grant had 20 points, 6.0 rebounds and 5.0 assists in 35 minutes of action, too.  The team did out-rebound the Thunder 52 to 40.

However, Detroit missed a lot of shots. The Thunder outscored the Pistons 58 to 34 in the free throw lane. In their 11-point loss, they shot 41-for-99 (41.4%) from the floor and 16-for-41 (39%) from behind the arc. After losing another home game, Detroit is now 2-9 at home, 2-10 away and 5-6 ATS at home this season. Together with another frustrating loss, the Pistons’ losing streak was extended to nine games.

As for vital betting trends, the Wizards are 3-8-1 ATS in their previous 12 performances. The total has also gone over in four of their last six games. Next, the team 1-4 straight up in their past five contests played. In addition to the total going over in seven of their previous 10 matches versus Central Division opponents, Washington is 1-6 SU in the team’s last seven games against Eastern Conference opponents.

For the Pistons, they are 0-9 SU in their past nine games played. Not to mention, the total has gone under in four of Detroit’s previous five matches versus Washington. Also, the total has gone under in eight of the Pistons’ last nine games against Eastern Conference opponents. Nonetheless, they are 5-1 ATS in their prior six home contests against the Wizards. Taking everything into account, think about picking the Wizards to win and cover the spread.

Pick the Wizards to win, they will cover the spread and the total will go over 209.5. Washington is a 5.5-point favorite with BetUS.