Speaking after a win against Detroit on Friday night, Zach LaVine said that part of the early frustrations come from the fact that Chicago, then 2-4, could “easily be 4-2.” There’s certainly truth to that – the Bulls held double-digit leads against both Charlotte and New York before folding down the stretch.

Now, after sandwiching the Detroit win with uninspired losses to Cleveland last Wednesday and Indiana yesterday, Chicago sits at 2-5 – despite facing the NBA’s third-easiest schedule – with a game against the Lakers on tap for Wedenesday night.

Chicago does play in the East, where slow starts can be survived. But the first step in righting the ship is uncovering the root of the problem – and the biggest red flag may be that their issues are hardly attributed to one thing.

Let’s start with the offense. We’ll get to the defense later this week.

Chicago has missed a ton of shots. The Bulls are 29th in field goal percentage and 26th in three-point percentage, resulting in a rough 104.6 points per 100 possessions. 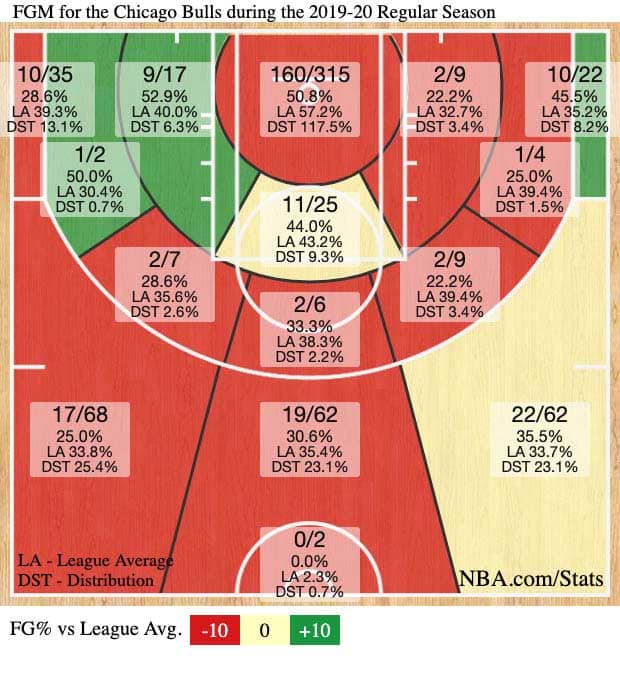 As you can see, of the 15 shot zones, the Bulls are below-league-average in 10 of them. One area seems destined to improve – the 10-for-35 mark from the left corner. The corner three is notoriously the best bang-for-your-buck shot in basketball, and with a 10-for-22 mark from the right corner, there’s no reason to think their left-side mark won’t rise.

It’s also okay to assume that their above-the-break numbers will increase. The three players most responsible for those attempts are LaVine, Lauri Markkanen, Otto Porter Jr. and Coby White. They are a combined 48-for-155 from outside. While LaVine is prone to take tougher shots, the latter three have gotten solid looks so far. They just haven’t gone in.

(Side note: Maybe the most significant problem has been Markkanen’s struggles. The big man is shooting 38.7 percent this season and has been sat down the stretch in favor of Thaddeus Young. He’s also not part of Chicago’s most statistically effective lineup.)

What else is concerning is the 50.8 percent on shots in the restricted area, and the 43.1 percent mark on layups. The rest of the league shoots 57.2 percent in the restricted area. There are nine Bulls who have played over 100 minutes this season. Of that group, only two are shooting above 50 percent from 0-3 feet: Kris Dunn and Wendell Carter Jr, and Dunn has only taken 21 shots from that distance.

The Bulls have been bad from everywhere else inside the three-point line (19.9 percent on field goals between three feet and there). If that trend continues, finishing at the rim is even more essential.

The Bulls’ offense has also struggled in a major facet of the game: the pick-and-roll. Per Synergy Sports, Chicago uses the pick-and-roll in about 20 possessions per 48 minutes, 16th in the NBA. They’re only scoring 0.76 points per each possession, which ranks 22nd in the league.

This has a lot to do with how the Bulls typically get into their ball screen action. They’ve run dribble handoffs continuously throughout the first seven games, and most of their P&Rs are born out of that. The problem with only running ball screens as a consequence of a dribble handoff is that Chicago ballhandlers rarely get any leverage coming around the screen, and the screener usually slips out of necessity.

They would benefit from starting more ball screen action from a standstill. Effective P&R usually involves a solid screen that makes contact on the defender. The screener’s bump on the on-ball defender forces him to either fight over the top, step underneath or switch. The first two options give the Bulls’ ball-handlers leverage they aren’t getting. The second potentially gets a switch.

It’s elementary, but it’s worth noting in light of the Bulls’ incessant ball screen failures. When the screen is constantly set this way, the defender of the “screener” just needs to drop to let his teammate can slide through. Now, the on-ball defender remains either in front of the Bulls’ ball-handler or on his hip, forcing the handler to take a wider angle. The wide-angle puts way less pressure on the defense. It also leaves the screener with no advantage in a slip because his defender stayed below him the entire time.

Another issue has been the awkward rotation and three point-guard lineups. The Bulls’ starting five, with LaVine and Tomas Satoransky in the backcourt, is the most-used lineup with 190 possessions so far. And the second and third most-used lineups?

These lineups featuring three point guards have not been good, yet they’ve been consistently relied upon thus far. Thad Young’s relatively sturdy play and Markkanen’s previous troubles can explain some of the differences in these two lineups; the problem with both is the spacing and overall offensive issues posed by playing White, Dunn and Arcidiacono together.

As LaVine mentioned Friday, it’s an 82-game season. This is a small sample size. The panic button should usually be spared unless the same troubles persist 20 games in – but for a team whose preseason was filled with postseason aspirations, their hand could already be on it.

Drew Mays is a basketball writer currently based in Louisville, Kentucky. Find him on Twitter @dmays0