The Phoenix Suns and the Milwaukee Bucks face off in Game 2 of the NBA Finals tonight at 9 pm EST.

Bucks’ talisman Giannis Antetokounmpo returned to the fold for Milwaukee in Game 1. The 2x MVP had been an injury concern for the finals after landing awkwardly in Game 4 of the Conference championship.

The return of the Greek wasn’t enough for a Milwaukee win though. Led by an inspired offensive performance from Chris Paul (32 points; 9 assists), and an impressive night of rebounding from Deandre Ayton (19 rebounds!), the Suns won convincingly, 118-105.

The Bucks is a team that tends to bounce back well when from defeat, so Game 2 is up for grabs, especially with Giannis back in the swing of things and showing no ill effects from the knee injury.

This one could be an epic! Read on to get all the latest news on the biggest series in world sport, as well as the latest odds and NBA betting tips. 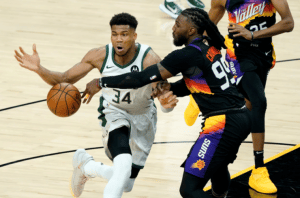 Phoenix: In Game 1, the Suns were offensively economical in all areas but 3-point shooting which was way down from the previous game vs. the Clippers at 32.4%. From the free-throw line, Phoenix sunk 25/26 attempts which more than made up for the lack of efficiency from outside the 3-point arc.

Jae Crowder put in some shift and, as a unit, the Suns defended the paint well – even Antetokounmpo got stuck under the basket a few times. Milwaukee probably did a better job from outside the arc than most expected, scoring 16/36 3-point attempts with 44.4% accuracy. But, if I’m a Phoenix fan, I’m happy to see the Bucks shooting from behind the arc, especially with Deandre Ayton cleaning house on the rebounds (36 in his last two games!).

Backup center Dario Saric has gone down with a torn right ACL and will sadly miss the rest of the finals so Torrey Craig and Frank Kaminsky will likely feature on rotation. The bad news for the Bucks, however, is that Saric’s absence will likely just mean more time on the court for Ayton, who is quietly making his own case for MVP, in our opinion. 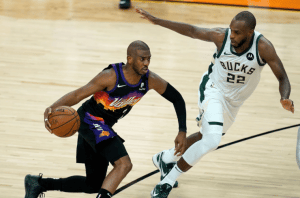 Milwaukee: Giannis Antetokounmpo finished up with 20-points and 17 rebounds from 32 minutes played in Game 1. The big power-forward generally seemed fit; he was perhaps a bit slow on the turn and not as aggressive as he can be in the paint. But, overall, it bodes well for the Bucks that their star man is back on the court.

Khris Middleton’s 29-point haul was another cause for optimism for Milwaukee, but the likes of Brook Lopez and Jrue Holiday need to step up their offensive output in support if the Bucks hope to outscore a Suns team that can boast home-court advantage for the second time in three days.

Phoenix has played Milwaukee three times this season, winning on each occasion, so it’s little wonder the Bovada oddsmakers have them as favorites for tonight’s big game.

The Suns were hands down the better team in Game 1 – the Bucks struggled to get to grips with Devin Booker’s passing and Chris Paul’s sharp-shooting, particularly in the third quarter when the veteran all but put the game to bed with 16 points.

But Milwaukee definitely has another gear to slip into. Mike Budenholzer needs to tighten up his defense and get his men to up the aggression at the basket. If the Bucks can do that, they have every chance of stealing a victory on the road before the series heads back to Milwaukee.

It’s not uncommon for a team to bounce back from a road defeat. So, we’re going for the Bucks on the moneyline tonight at +185 and also to cover the spread at +5.5 (-110)

On the prop market, we’re also going in on Deandre Ayton O13 rebounds, too.

What a night of action we’ve got in store. Enjoy yourselves out there and remember to never bet more than you can afford.