Giannis Antetotokounmpo returned to top form with 42 points and 12 rebounds in Game 2 of the NBA Finals, but it wasn’t enough to stop the Milwaukee Bucks slipping to 0-2 against a spirited and technically proficient team effort from the Phoenix Suns.

A stint back home at the Fiserv Forum couldn’t have come soon enough for a wounded Bucks outfit that’s struggling to put it all together so far in this series. 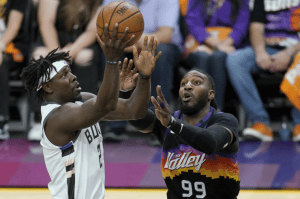 It’s hard to lay all the blame at the feet of Mike Budenholzer or his team, mind: each time Antetokounmpo would take one to the rim, it just felt like Devin Booker would sink a 3-pointer in response. And where did that 27 point performance from Mikal Bridges come from? The Suns have been in top form – Monty Williams team is winning this series much more than the Bucks are losing it (if you know what I mean).

The Suns hit 20/40 3-pointers in total in Game 2, shooting from outside the arch with 50% accuracy, whereas the Bucks managed a measly 9/31 with 29% accuracy in the same metric. We wrote before the first game tipped off that, ‘the Bucks do NOT want to get caught up in a 3-point shootout with the Suns,’ and Game 2 showed exactly why.

To get back to winning ways on home turf, Milwaukee needs to do what got them to the finals in the first place, namely: excellent hustle on defense and economical offense, especially at the paint; the Bucks can’t afford to be lulled into the kind of distance shooting tit-for-tat that Chris Paul and co. desire. If they do, and if Giannis is the only guy to post +20 points again, they’ll lose. It’s that simple.

But what do the oddsmakers make of it all, and which team and lines are we putting money down on for this series-defining Game 3 clash?

Read on to get a full preview, the latest odds, and our top picks. 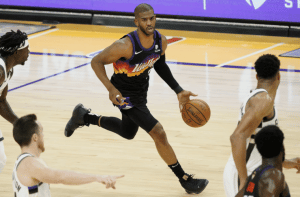 The Phoenix Suns: One of the Suns’ key rotational options Torrey Craig is listed as questionable for tonight’s game in Milwaukee. The Suns are already without Dario Saric, who went down with a torn ACL in his right knee in Game 1, so this is likely to mean extra time out on the court for the starters.

Besides that, the Suns just need to keep doing what they’ve been doing. In Game 2, Booker, Paul, and Bridges each posted +20 point games; the 3-point shooting has been tremendous; Deandre Ayton’s defense and rebounding has been superb, and the Suns aren’t one of those teams that struggle on their travels much either – during the regular season, Phoenix won 75% of road games.

This Suns team has every chance of coming out of this one 3-0 up – something that’s reflected in the NBA odds on the sportsbooks. 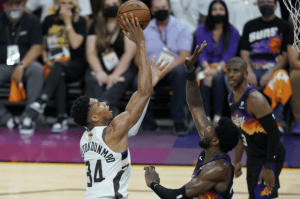 The Milwaukee Bucks: Giannis and co. are 5-6 on the road in the playoffs but 7-1 at home, so it’s clear that being back at the Fiserv Forum should be a huge boost to a team that has looked surprisingly low on confidence thus far in the series.

That said, it’s unlikely to matter an inch where this game is played if the Bucks’ supporting cast doesn’t step up in Game 3. Besides the excellent return to form of Antetokounmpo, whose +20 points in the third quarter put him alongside the awesome company of Michael Jordan as one of only four players in NBA history to achieve such a haul in one-quarter of the NBA finals, not one other player posted above 20. And this is obviously a huge problem.

Khris Middleton registered just 11 points, converting 5/16 field goal attempts, and Jrue Holiday fared even worse, going 7-for-21 as he amassed a subpar 17 points. It was Holiday’s performance that was most concerning for the Bucks: he’s the Robin to Giannis’s Batman, and a much-improved outing is required from the former 76er and Pelican if the Bucks hope to eke their way back into the series.

Expect to see an aggressive first-half performance from the Bucks: they’re wounded animals and they’ll know that no team has ever returned from 3-0 down in playoff history, let alone in the finals. So, this is an absolute must-win situation, and I expect Milwaukee to play as such.

With all that said, Phoenix is 4-0 vs. the Bucks this season and it’s hard not to start to feel like they have their opponents’ number a little here…

We’re backing the Bucks to be up at the half on the alternate spread of 6.5 (+148). But, we’re also backing the Suns on the moneyline to make it 3-0 – it’s such a close game to call that we can’t help but go for the underdog with the superior NBA betting odds.