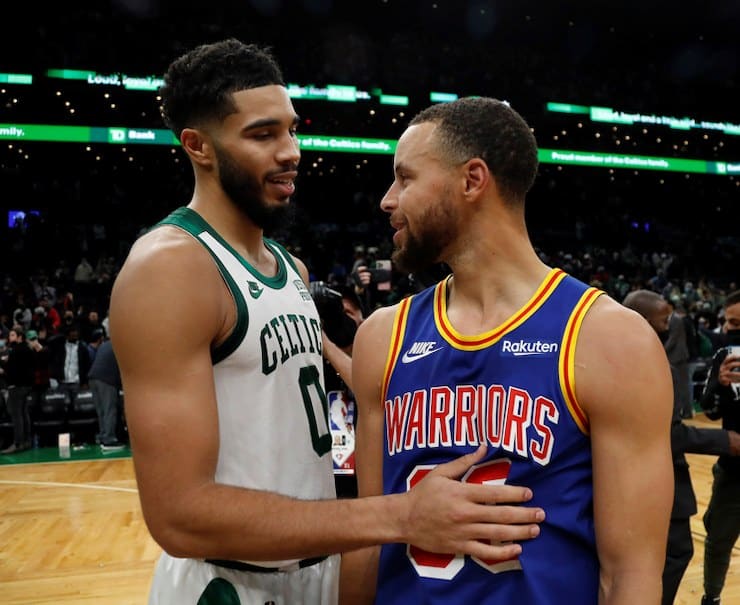 On Thursday, the 2022 NBA Finals begins; free NBA Finals MVP odds, predictions and picks for the Warriors vs Celtics series are here. BetOnline odds are featured below. Golden State is a 3.5-point favorite over Boston to win Game 1. Additional NBA betting picks and sports betting content is on the main page.

BetOnline is the Best Online Sportsbook for NBA Betting

RELATED: Lakers will not use first-round draft pick to trade Russell Westbrook

On Thursday, Jun. 2, the Boston Celtics are playing the Golden State Warriors in Game 1 of the 2022 NBA Finals at 9 p.m. ET. This contest can be watched live on ABC. According to BetOnline oddsmakers, Warriors guard Stephen Curry possesses the best odds (-105) of winning Finals MVP. The eight-time All-Star is averaging 26.4 points, 5.3 rebounds, 6.3 assists and 1.5 steals per game this postseason.

However, for all the risk-takers, the Celtics could upset the Warriors. What if Curry sustains another injury against Boston? What if Draymond Green gets ejected and/or has to serve another suspension during the NBA Finals? If the Celtics win this series, guard Jayson Tatum has the best odds (+140) of winning the Finals MVP. The fifth-year player this season is averaging 27 points, 6.7 rebounds, 5.9 assists and 1.2 steals per game in the playoffs.

Furthermore, oddsmakers are expecting either Stephen Curry or Jayson Tatum to win the 2022 NBA Finals MVP. Based on previous accomplishments, it makes sense why Curry is the favorite. After the Warriors defeated the Mavericks in five games, the two-time scoring champion won the NBA’s first ever Western Conference Finals MVP award.

But Curry has yet to win the NBA Finals MVP. Other players around him have stepped up during crunch time. It’s just something to think about. Additionally, Jayson Tatum became the first winner of the Eastern Conference Finals MVP award. Tatum averaged 25 points, 8.3 rebounds and 5.6 assists per game against the Heat.

RELATED: Giannis Antetokounmpo on Los Angeles: “This city is not for me.”

One factor all bettors should consider regarding the NBA Finals MVP is team strength. For example, Luka Doncic is clearly the Mavericks’ most valuable player. Though, the Warriors were the better team this season. This is why Golden State is representing the Western Conference. Needless to say, wins are the most important metric. Otherwise, the league would have a lot of players on losing teams win the finals award. It doesn’t work like that.

While Jayson Tatum is playing better than Curry offensively, gamblers are expecting the Warriors to defeat the Celtics in six games. If one disagrees, prove critics wrong by picking the underdog. Stranger things have happened in the NBA. As stated before, injuries are an important factor. As underdogs, the 1968-69 Celtics came back from a two-game series deficit to beat the Lakers in Game 7 of the NBA Finals. And it was Bill Russell’s last season.

Moreover, Klay Thompson winning the NBA Finals MVP would be a big surprise for fans. But it shouldn’t be. This could be the right time for the five-time All-Star. After overcoming ACL injuries the past couple of seasons, the guard is seeking redemption.

During the Western Conference Finals, Thompson averaged 18.6 points, 3.8 rebounds and 3.2 assists per game against Dallas. If Curry sustains an injury or falls into a slump, assuming Golden State can hang on to win, Thompson is a solid Finals MVP pick. He is the second-best candidate on the Warriors.

In the first regular season matchup, both contenders were missing key players. The Celtics had a few notable contributors in the league’s health and safety protocols: Al Horford and Sam Hauser. Plus, the Celtics traded for Daniel Theis. Before the trade deadline, Dennis Schroder, Enes Freedom and Bruno Fernando were sent to the Rockets. Josh Richardson was traded for Derrick White as well.

Not to mention, the Warriors were without Klay Thompson and James Wiseman in the first meeting. Wiseman is out for the season due to a right knee injury. When playing at full strength, Golden State has the edge over Boston on paper. It all comes down to execution. If the Warriors do what they do best — sink shots from downtown — the team will win another championship.

Moving on to the second regular season meeting, the Celtics defeated the Warriors 110-88 away on Mar. 16. Curry sustained a left foot injury after Marcus Smart landed on his leg while diving for the ball. The 13th-year guard played just 14 minutes in this matchup. Boston outscored them 31-19 in the fourth quarter.

For a reminder, Andrew Wiggins and Gary Payton II also didn’t play. This was the Warriors’ fourth straight loss to the Celtics at home. For one other important betting trend, the Celtics are 6-0 after a loss in the 2022 NBA Playoffs. If the team stays healthy, Boston could continue its road dominance over Golden State. Nonetheless, will the C’s win the series? It’s doubtful. The Warriors have too much firepower.

RELATED: How to Watch the NBA Playoffs Conference Finals for Free on YouTube?

BetOnline is one of the top sportsbooks in California and Massachusetts.