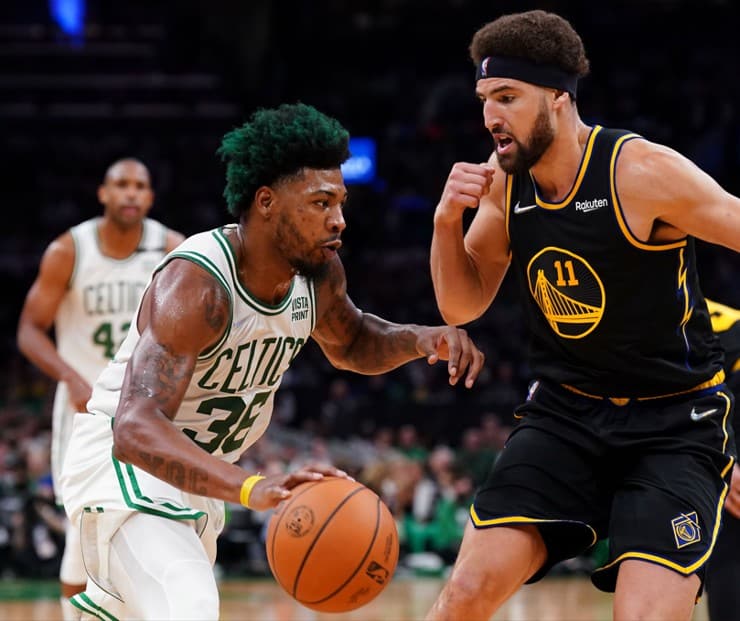 BetOnline odds, NBA Finals Game 6 props and best NBA player props for the Warriors vs Celtics matchup are available below. More NBA betting picks and sports betting content is on the main page.

BetOnline is the Best NBA Sportsbook for Parlay Betting

BetOnline is offering a $1,000 bonus today. Bovada and BetOnline are the best sportsbooks for NBA betting during the 2022 NBA Finals. Click below to register. To learn more about NBA betting, check out our top sportsbooks page for discounts and free $1,000 sign-up bonuses.

For Game 6 of the 2022 NBA Finals, our betting experts at Basketball Insiders have picked noteworthy prop bets for the Warriors vs Celtics rematch. Will both contenders score at least 100 points in Game 6 on Thursday night? Can Klay Thompson score a minimum of 20 points again at TD Garden?

Next, will Al Horford finish with one block? Read the predictions below. Other NBA player props, Game 6 props, predictions, odds and betting picks for the 2022 NBA Finals are on the main page. Feel free to read our list of offshore betting sites and sportsbooks.

In two of the last five matchups of this NBA Finals series, both teams scored at least 100 points. Though, bettors might choose “No” for this prop bet. Two teams with All-Star defenders will usually lead to the point total going under rather than over. But there’s not much defense in today’s game. This is a win-or-go-home test for Boston. So, expect higher scoring.

Moreover, Warriors guard Klay Thompson is averaging 19.4 points per game this postseason. In Game 1 of the 2022 NBA Finals, Thompson put up 15 points at Chase Center. Then, he scored 11 points in the following contest. Nevertheless, the five-time All-Star generated 25 points in Game 3 at TD Garden. Next, the ninth-year veteran finished with 18 points in Game 4.

Lastly, Thompson ended his Game 5 outing with 21 points. He only reached the 20-point mark twice against the Celtics. Not to mention, he scored over 20 points just one time versus the Mavericks during the Western Conference Finals. Thompson put up 35 points in Game 5 of that series. Taking everything into account, the guard was at his best statistically prior to his season-ending injuries. Now, he’s too inconsistent. Take the under.

Finally, our last NBA player prop for Game 6 of the 2022 NBA Finals pertains to Celtics center Al Horford. He is averaging 1.4 blocks per game this postseason. In Game 1 of this series, Horford finished his performance without a block. But the center ended his outing with one block in Game 2. Then, the 15-year veteran proceeded to put up at least one block in the third and fourth contests.

Additionally, in Game 5, Horford failed to accumulate a block. In other words, the five-time All-Star had at least one block earned in three of the past five matchups versus the Warriors. During the Eastern Conference Finals, Horford amassed a minimum of one block in every contest except for Game 6. Since Thursday night’s game is taking place at TD Garden, the Celtics are expected to show up defensively. Their season is on the line.

BetOnline is one of the best sportsbooks in California and Massachusetts.