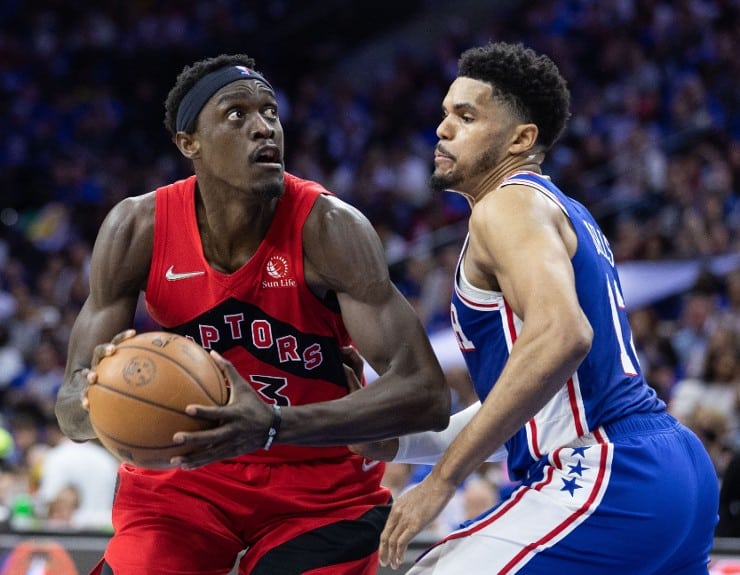 Today, the first round of the 2022 NBA Playoffs continues with three games; free NBA playoffs picks, odds, and best NBA bets are posted here. For Game 2, the Toronto Raptors take on the Philadelphia 76ers at 7:30 p.m. ET. Then, the Utah Jazz are playing the Dallas Mavericks at 8:30 p.m. ET.

Next, the Denver Nuggets are facing off versus the Golden State Warriors at 10 p.m. ET. The Raptors-76ers and Nuggets-Warriors matchups will air live on TNT, whereas the Jazz-Mavericks can be watched live via NBA TV. BetOnline odds and free NBA playoffs picks are available below.

For the Raptors’ injury report, Thaddeus Young, Gary Trent Jr. and Scottie Barnes were downgraded to doubtful on Monday morning. On top of dropping two of their last five games the Raptors are 2-5 ATS in their past seven road meetings versus the 76ers.

On the other side, the 76ers have two players listed on their injury report: C Charles Bassey (out) and SG Jaden Springer (questionable). Counting the Sixers’ Game 1 win over the Raptors, they have now won six of their previous seven contests. Plus, the total has gone over in four of Philadelphia’s last five matchups against Toronto.

According to the point spread consensus, the 59% of bettors are expecting the Sixers to cover the spread tonight. And, an overwhelming 85% of gamblers are hoping the total will go over 217.5. In short, pick the 76ers to win, they will cover the spread and the total will go over 217.5. More NBA playoffs picks, odds and best NBA bets are on the main page.

Moreover, since the Mavericks are still without Luka Doncic, the Jazz remain favored in this series. Their leading scorer was downgraded to doubtful today. In Game 1, Utah bested them 99-93. Not only did the Jazz outrebound the Mavs 53-34, they put up 50 points in the paint. Donovan Mitchell scored a team-high 32 points as well.

While a win is a win, the Jazz are now 1-5 ATS in their past six matchups versus the Mavericks. Also, the total has gone under in 11 of Utah’s previous 13 road games. After viewing the Jazz’s injury report, Trent Forest was downgraded to out for this Game 2 contest.

As for the Mavericks’ injury report, aside from Luka Doncic, Frank Ntilikina was downgraded to out today due to an illness. With this loss to the Jazz, the Mavs are now 6-1 in their past seven home games. However, without their three-time All-Star guard, they kept it close against the Jazz. This is why bettors are predicting that Dallas will bounce back tonight.

To add to the betting trends above, the Mavs are 8-3-1 ATS in their previous 12 contests. The total has gone over in six of Dallas’ last eight games, too. All things considered, pick the Mavericks to win, they will cover the spread and the total will go over 206.5. Other NBA playoffs picks, odds and best NBA bets are on the main page.

Additionally, on Saturday, the Nuggets lost 123-107 on the road against the Warriors in Game 1. If the Nuggets drop another one tonight, oddsmakers will count them out of this series. In the third quarter, Golden State outscored them 32-23. Jordan Poole led the home team in scoring with 30 points. The Warriors are now on a six-game win streak.

The Nuggets are 3-10 ATS in their last 13 head-to-head games versus the Warriors. For another side note, the total has gone over in five of Denver’s past six road contests. Based on the Nuggets’ injury report, guard Facundo Campazzo served his one-game suspension on Saturday. So, he is eligible to return to the court tonight.

Furthermore, the Warriors are 6-1 ATS in their past seven games played. Aside from James Wiseman suffering a season-ending knee injury, the team has a healthy roster. The Warriors are more than capable of defeating any Western Conference contender. And, the total has gone over in four of Golden State’s previous six games when playing as the selected favorite.

For the point total consensus, 72% of bettors are putting their faith in the Warriors to cover the spread at Chase Center. Not to mention, about 81% of gamblers are thinking the total will go over 224. Therefore, pick the Warriors to win Game 2, the Nuggets will cover the spread and the total will go over 224. Other NBA playoffs picks, odds and best NBA bets are on the main page.

BetOnline is one of the best sportsbooks in California, Colorado, Pennsylvania, Texas and Utah.