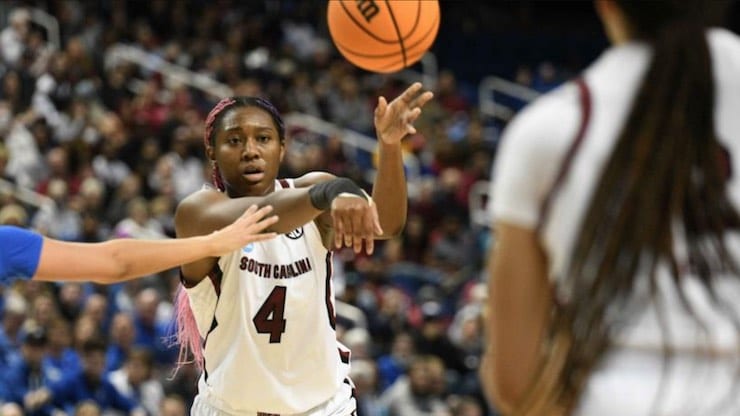 The field is set for the 2022 NCAA Women’s Final Four. All four teams are in a familiar spot, with three of the fours teams making the semifinals just a year ago. The Women’s Final Four will showcase some of the most dominant women’s college basketball programs and players in the country. The No.2-seeded UConn Huskies are fresh off of a thrilling double-overtime victory over NC State Wolfpack on Monday, joining South Carolina, Stanford, and Louisville in the national semifinals. In this article, we’ll go over odds to win the Women’s NCAA Tournament and break down the Women’s Final Four odds for each game on Friday.

The Final Four features the best Women’s college basketball programs in recent history, three of the four teams have been No.1 seed for five consecutive tournaments. Currently the South Carolina Gamecocks are the best team in the country and have the best odds to win the Women’s NCAA Tournament. On the other hand, the Stanford Cardinal are the defending national champions and Connecticut will be making their 14th consecutive Final Four appearance. Louisville will also be making their fourth trip to the Final Four this year.

The best women’s college basketball programs will face off this weekend for the NCAA title. There are three No.1 seeds in South Carolina, Louisville, and Stanford, along with the dominant UConn program at the No. 2 seed . Filled with plenty of talent and star power, each Final Four team has the ability to bring home the  2022 national title.

All NCAA women’s college basketball odds are taken from BetOnline.

South Carolina is back with their second consecutive Final Four appearance. Led by potential National Player of the Year, Aliyah Boston, the Gamecocks have the best defense in the country. They lead the nation in defensive rebounding and don’t allow second chance opportunities on the offensive glass. South Carolina also leads the nation in field goal percentage defense, effective field goal percentage defense and points per play.

Meanwhile, Louisville plays with a chip on their shoulder with all the attention surrounding the other three teams during the Final Four. As underdogs, the Cardinals have a stand up defense only allowing 70 points twice the entire season. Hailey Van Lith has shined throughout the Women’s NCAA tournament scoring 20 points or more in four consecutive games. While the Cardinals missed the Final Four last season, they have a good supporting cast in Chelsie Hall, Kianna Smith, and Emily Engstler.

For the latest Louisville vs South Carolina odds, check out the chart from BetOnline below.

Stanford finds themselves in a familiar position, one game away from defending their national tite. The Cardinal are currently on a 23-game winning streak coming into the Women’s Final Four and they currently have two of the best players in the country in Haley Jones and Cameron Brink. Brink is Stanford’s leading scorer, rebounder, and the PAC-12 defensive player of the year. On the court, there’s no one that can match up with her aside from South Carolina’s Aliyah Boston. Stanford has a lethal offense when Brink is not in foul trouble. Look for the 6-foot-4 sophomore to have a major impact on Paige Bueckers and the UConn Huskies’ offensive attack.

On the other hand, Bueckers led UConn in a double overtime win over the No.1 seed NC State. While Bueckers looked to return to form after missing 19 games with a tibial plateau fracture and torn meniscus, the Huskies will need to rely on their freshmen for a shot at a National Championship. Despite posting 14 consecutive NCAA Women’s Final Four appearances, UConn has not won a national championship since 2016. The Huskies will need strong games from freshman Azzi Fudd and Christyn Williams for any chance at making it to the NCAA Women’s National Championship Game.

For the latest Stanford vs Connecticut odds, check out the latest NCAA Women’s Final Four odds from BetOnline below.

Below, we’ve ranked the best sportsbooks for the NCAA Women’s Final Four this weekend.