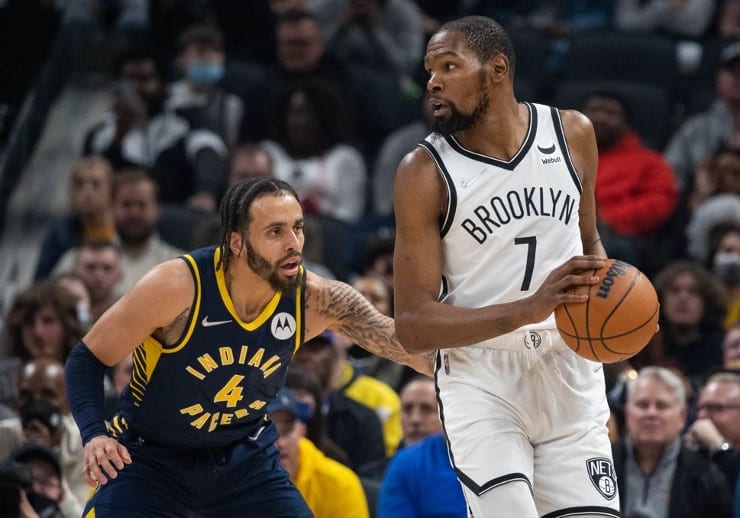 The Brooklyn Nets opened the 2022 offseason with +750 odds of winning the 2023 NBA championship, but then Kevin Durant requested a trade from the team. Their implied probability of winning was 11.8%.

According to BetOnline oddsmakers, after the two-time Finals MVP announced his decision, the Nets’ title odds dropped to +2500. Their implied probability decreased to 3.8%.

By July, the team’s championship odds were down to +4000. Without Durant remaining on the roster, Brooklyn’s title chances would have been comparable to the Toronto Raptors and New Orleans Pelicans’ odds.

Now, after Durant withdrew his trade request, the Nets possess the fourth-best odds (+750) of winning a championship in the 2022-23 season.

On Tuesday, the Brooklyn Nets’ official Twitter account tweeted this message: “The following statement has been released by G.M. Sean Marks: Steve Nash and I together with Joe Tsai and Clara Wu Tsai, met with Kevin Durant and Rich Kleiman in Los Angeles yesterday.”

“We have agreed to move forward with our partnership. We are focusing on basketball, with one collective goal in mind: build a lasting franchise to bring a championship to Brooklyn.”

Brooklyn is a superior team with the four-time scoring champion

However, the Los Angeles Lakers and Nets had the highest odds of winning a championship last season. In the end, LeBron James and the Lakers failed to qualify for the play-in tournament. And the Nets were swept by the Boston Celtics in the first round of the playoffs.

Furthermore, one thing everyone will agree on is that Brooklyn is better off with Durant. In 55 games played with the Nets last season, while shooting 51.8% from the floor and 38.3% from 3-point range, the two-time NBA champion averaged 29.9 points, 7.4 rebounds and 6.4 assists per game.

Not to mention, Durant earned his 12th All-Star selection and fourth All-NBA Second-Team selection. While an implied probability of 11.8% doesn’t sound like much, the Nets are in a more desirable spot now than they were one month ago.

The Nets have not advanced to the Eastern Conference Finals or NBA Finals since the 2002-03 season. Under head coach Byron Scott, the Nets finished 49-33 (.598) in the regular season and second overall in the conference standings.

But the team was bounced in six games of the 2003 NBA Finals against the San Antonio Spurs. Can the Nets at least make an ECFs appearance with Kevin Durant and Kyrie Irving? Fans and bettors alike are not yet sold on both players remaining on the roster in the coming months.