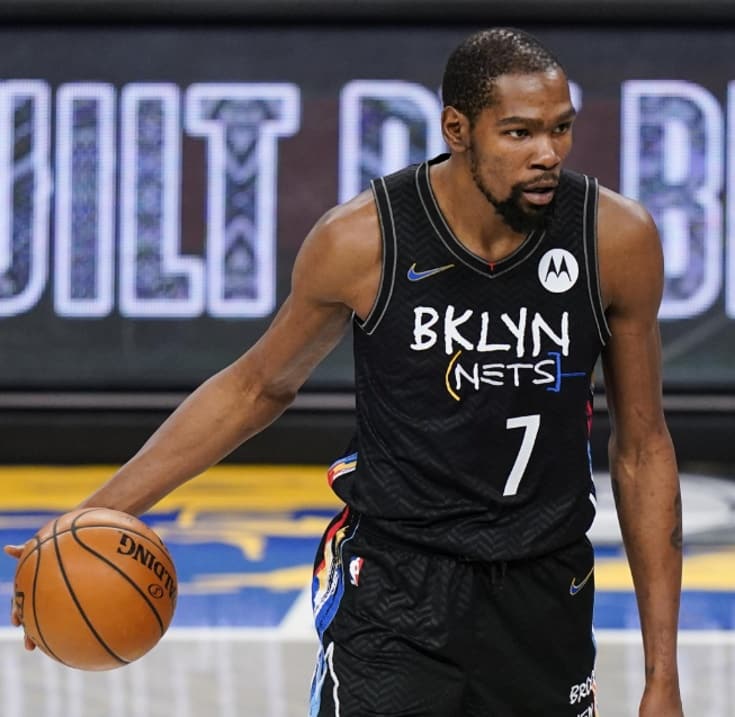 On Friday, Oct. 22, 2021, the Brooklyn Nets (0-1) are playing the Philadelphia 76ers (1-0) at Wells Fargo Center. This is the second game for both Eastern Conference contenders of the 2021-22 NBA regular season. BetOnline odds are available down below.

Leading into Friday night’s intraconference matchup, the 76ers are 2-1 versus the Nets in their previous three head-to-head meetings. On Apr. 14, 2021, the last time these teams faced off during the regular season, Philadelphia won 123-117 at home. Plus, the 76ers are 8-2 against Brooklyn in their past 10 meetings.

Before the Nets’ season opener, NBA Commissioner Adam Silver spoke out about Kyrie Irving’s decision to remain unvaccinated against COVID-19. Charles Barkley also called out the guard for his stance. At this point, no one is going to change anyone’s mind.

For Brooklyn, point guard Kyrie Irving is out indefinitely. Needless to say, the organization will not allow the guard to return until he receives his COVID-19 shots. If it’s any consolation to Irving, at least he is staying true to his beliefs—even if it’s hurting the organization. Next to Irving, Day’Ron Sharpe is listed as probable for tonight’s game. He was recovering from a toe injury.

Meanwhile, for Philadelphia, point guard Ben Simmons served his one-game suspension for conduct detrimental to the team. However, according to sources, the guard is not ready to play tonight. He said he is mentally unprepared. Simmons also received treatment on his back today. Next, Joel Embiid is listed as questionable, Shake Milton was downgraded to out and Grant Riller is out indefinitely.

Simmons reported to shootaround today ahead of Nets game and was seen engaged around the team, sources said. The three-time All-Star has expressed he wants to play but isn't prepared mentally. https://t.co/DUuPfGch2s

Moreover, in Tuesday’s seasons opener against the Bucks, the Nets lost 127-104 on the road. Small forward Kevin Durant led his team in points and rebounds, finishing with 32 points and 11 rebounds in 30 minutes played. Patty Mills contributed 21 points, 2.0 rebounds and 2.0 assists in 29 minutes on the court as well. Milwaukee held Brooklyn to only 19 fourth-quarter points.

When viewing the team statistics, aside from free-throw shooting and rebounds, the Nets played a decent game offensively. They shot 37-for-84 (44%) from the field and 17-for-32 (53.1%) from three-point range. The problem is, Kevin Durant cannot possibly do everything.

Furthermore, in the 76ers’ 117-97 win over the Pelicans on Wednesday, Joel Embiid and Furkan Korkmaz each scored a team-high of 22 points. Forward Tobias Harris ended his night with 20 points, 12 rebounds and 2.0 assists in 28 minutes played, too.

Shooting-wise, Philadelphia shot 44-for-85 (51.8%) from the floor and 13-for-25 (52%) from behind the arc. Similar to any other basketball contest, the difference-maker in this one was points scored in the paint. Philadelphia outscored New Orleans 50 to 36 in the paint. Not to mention, the Sixers held the Pelicans to 17 third-quarter points.

Additionally, the total for tonight’s Eastern Conference matchup is set at 226.5. According to the spread consensus, 87% of bettors believe the Nets will cover the spread. Regarding the total consensus, 61% of gamblers are thinking the total will go under 226.6. The biggest impact on all of these Brooklyn games is Kyrie Irving’s absence. Are the Nets just not as great without Irving? It could be true.

For betting trends, the Nets are 1-4 against the spread in their last five games played. The total has gone under in seven of Brooklyn’s past nine contests, too. And, they are 1-5 straight up in their previous six games. Keep in mind, the Nets are 0-6 SU in their last six contests played at the Wells Fargo Center. This is why bettors are lacking faith in Brooklyn.

As for the 76ers, the total has gone under in five of the team’s past five games. Also, Philadelphia is 10-5 SU in their last 15 games played. And, the 76ers are 11-3 SU in their previous 14 games played at home. To add to these betting statistics, the total has gone under in six of the team’s past seven games versus Atlantic Division opponents. Therefore, think about taking the under.

Pick the 76ers to win their home opener, they will cover the spread and the total will go under 226.5. The 76ers are three-point underdogs with BetOnline.