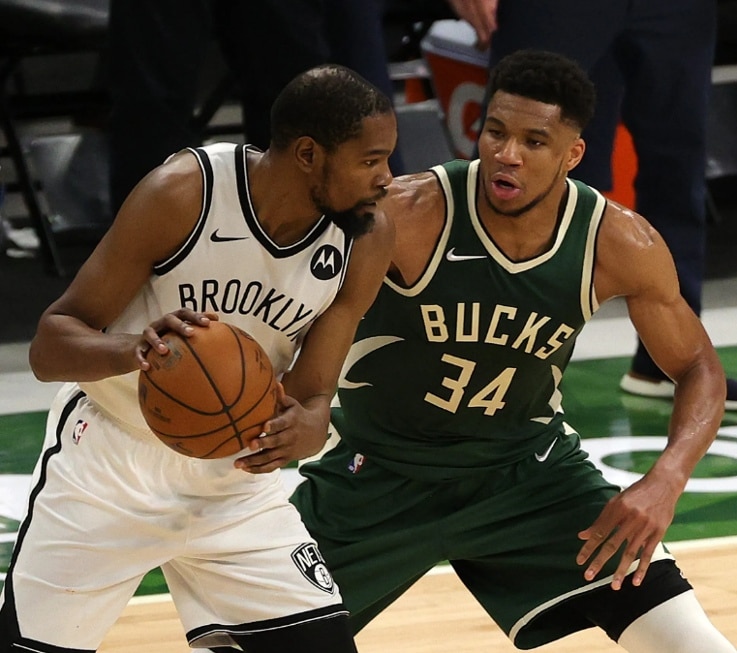 On Tuesday, Oct. 19, 2021, the Brooklyn Nets are playing the Milwaukee Bucks at the Fiserv Forum. This is the first matchup of the 2021-22 NBA regular season. BetOnline odds for this regular season opener are featured below.

Heading into the first match of the 2021-22 NBA regular season, the Bucks are 2-1 versus the Nets in the previous three head-to-head meetings. Although, this record does not include any exhibition games over the last few weeks. On Friday, Oct. 8, 2021, the Nets won 119-115 in the preseason. In last season’s Eastern Conference Semifinals series, Milwaukee defeated Brooklyn 115-111 in overtime of Game 7.

Moreover, the Bucks’ ring ceremony and banner unveiling begins at 6:45 p.m. ET at the Fiserv Forum. During the offseason, the organization celebrated their first NBA championship since the 1971 NBA Finals. Kareem Abdul-Jabbar and the rest of the team swept the Baltimore Bullets back in that series. In the 2021 NBA Finals, the Bucks defeated the Suns in six games. The Greek Freak also won his first Finals MVP award.

Joining us for Opening Night on Tuesday, @Bucks fans?

Doors open at 5pm. Make sure you are in your seats by 5:45pm so you don't miss a minute of the celebration. ??? pic.twitter.com/SGJj3rQ5S7

For the Nets, guard Kyrie Irving is listed out because of personal reasons. Of course, this news relates to the COVID-19 vaccines. The guard will not be allowed to play in home games at the Barclays Center. This is due to vaccine mandates in various cities, such as Los Angeles, San Francisco and New York. According to ESPN, Irving will remain away from the team until he receives the vaccine.

The Nets concluded their preseason with a record of 3-1. On Thursday, in the team’s 107-101 home victory over the Timberwolves, guard Joe Harris scored a team-high 23 points in 29 minutes played. Forward Kevin Durant accumulated 19 points, 7.0 rebounds and 1.0 assist in 32 minutes on the court as well.

While holding Minnesota to 19 points in the second quarter, the Nets scored 57 points in the first half. The Nets shot 38-for-82 (46.3%) from the field and 15-for-36 (41.7%) from three-point range. However, Brooklyn did allow 30 points in the opening quarter. If they want to beat the Bucks, they have to play even better defensively.

Meanwhile, the Bucks ended their preseason with a record of 1-4. On Friday, they lost 114-103 at home against the Mavericks. Forward Giannis Antetokounmpo led the team in scoring and rebounds, putting up 26 points and 10 rebounds in 25 minutes spent on the court. Jordan Nwora had 15 points, 3.0 rebounds and 1.0 assist in 24 minutes played, too.

Using exhibition contests to gauge a team’s success or season outcome is certainly flawed. Though, oddsmakers believe Milwaukee will take a step back this season. In their 11-point loss to Dallas, they shot 39-for-87 (44.8%) from the floor and 11-for-40 (27.5%) from behind the arc.

Furthermore, the opening week of the NBA regular season is always a risky time to wager bets. Several contenders rest their starters during exhibition contests, and this leads to questionable, premature assumptions from basketball spectators. The total for Tuesday night’s season opener is set at 237.5. In Brooklyn’s final preseason game, they scored 107 points versus Minnesota. Likewise, the Nets concluded their final exhibition matchup with 103 points.

For betting trends, the Nets are 13-4 against the spread in their past 17 games. Plus, the total has gone under in six of the team’s last eight games played versus Milwaukee. And, the Nets are 1-4 straight up in their previous five head-to-head contests. Not only are they 0-6 ATS in the last six matches in October, the total has gone under in their last five road games at the Fiserv Forum.

Pick the Bucks to win at home; the total will go under 237.5. Milwaukee is a one-point favorite with BetOnline.