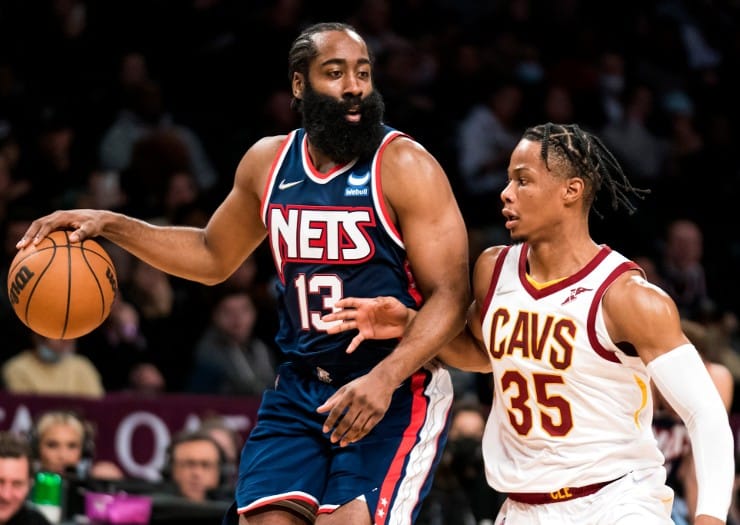 ESPN’s Basketball Power Index: Nets have a 62.1% chance of winning

Referencing Land of Basketball’s database, these Eastern Conference contenders have played one another 185 times all-time in the regular season. The Cavaliers are 104-81 versus the Nets. In the previous three head-to-head meetings, Brooklyn is 2-1 against Cleveland. Last Wednesday, the Nets defeated the Cavs 109-99 at Barclays Center. Additionally, Brooklyn is 6-4 in the team’s past 10 head-to-head contests against Cleveland.

Heading into tonight’s matchup, Cavs center Jarrett Allen is listed as questionable to play against the Nets. In the latest episode of The Wine & Gold Show, former NBA player Brad Daugherty commented on Allen’s importance to Cleveland’s team chemistry. He said, “I love his work ethic. I think he makes everyone better when he’s on the basketball court.” In the fourteen games Allen played this season, he averaged 14.2 points, 10.9 rebounds and 1.7 assists per game.

“I love his work ethic. I think he makes everyone better when he’s on the basketball court.”@BradDaugherty43 shared what he loves about @_bigjayy_ in the latest episode of the Wine & Gold show, presented by @betwayusa!

Moreover, in the Nets’ 115-113 home win over the Magic last Friday, guard James Harden led his team in points and rebounds, accumulating 36 points and 10 rebounds in 41 minutes spent on the court. Guard Patty Mills ended his performance with 22 points, 2.0 rebounds and 3.0 assists in 34 minutes of action. Brooklyn had an off game against Orlando, but it was enough to earn the win.

As for the Cavaliers, they lost to the Warriors 104-89 last Thursday. In their eighth loss of the season, guard Darius Garland scored a team-high 25 points in 38 minutes on the court. Both Dean Wade and Kevin Love each contributed 17 points as well. On top of out-rebounding the Warriors 42 to 34, they outscored them 27 to 13 in the third quarter.

Furthermore, the total for tonight’s intraconference meeting is set at 208.5. According to the spread consensus, 54% of bettors are thinking the Nets will cover the spread at Rocket Mortgage FieldHouse. Regarding the point total consensus, 61% of gamblers are expecting the total will go over 208.5. Thus far, Brooklyn is 12-4 as a selected favorite, 0-1 as an underdog and 4-4 ATS away, whereas Cleveland is 2-0 as a favorite, 8-8 as an underdog and 5-3 ATS at home.

For interesting betting trends, the Nets are 5-1 straight up in their past six performances. The total has also gone over in five of the team’s last six games, and they are 3-12 SU in their previous 15 road contests at Rocket Mortgage FieldHouse. Next, the total has gone over in four of their past five games versus Eastern Conference opponents. Lastly, they are 1-6-1 ATS in their last eight matches against Central Division opponents.

On the other side, the Cavaliers are 11-3-1 ATS in their previous 15 performances. And, the total has gone under in five of Cleveland’s past six games. Also, the total has gone under in seven of the Cavs’ last seven contests played at home. Next, the team is 8-2-1 in their previous 11 games played in the month of November. Finally, they are 5-12 SU in their past 17 games played on a Monday. Therefore, pick the Nets to win and to cover the spread.

Pick the Nets to win on the road, they will cover the spread and the total will go under 208.5. Brooklyn is a 6.5-point favorite with BetUS.