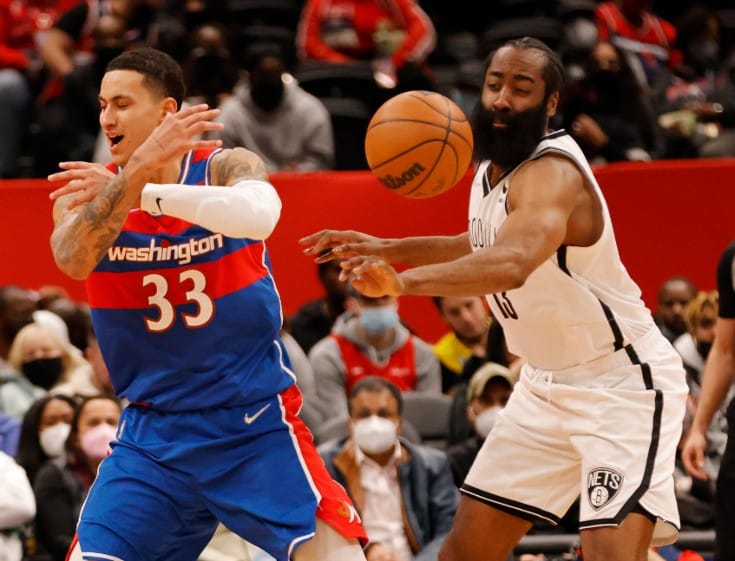 In Thursday night’s Eastern Conference rematch, the Brooklyn Nets (29-25, 19-34-1 ATS) are facing off versus the Washington Wizards (24-29, 20-32-1 ATS); NBA picks are posted here. Will Kyrie Irving and the Nets end their nine-game losing streak? Along with the starting lineups, our top NBA picks and betting trends are available below.

All Nets vs Wizards betting odds can be found at BetOnline

SG Bradley Beal (out for the season) | C Daniel Gafford (out)

Furthermore, in the Nets’ 126-91 blowout loss at home against the Celtics on Wednesday, Jevon Carter scored a team-high 21 points in 31 minutes played. Cameron Thomas and James Johnson each ended their performances with 17 points as well. Brooklyn has won just one of its past 10 contests. Not only are the Nets on a nine-game losing streak, the team is now 17-11 away, 12-14 at home and 14-14 ATS on the road this season. Needless to say, they have several injured players.

According to ESPN’s Basketball Power Index, the Wizards have a 52.3% probability of winning.

After reviewing other head-to-head meetings, in the previous three matchups, the Nets are 3-0 against the Wizards. On Jan. 19, 2022, the second time these teams faced off during this regular season, Brooklyn won 119-118 at Capital One Arena. So, the Wizards have not defeated them since Jan. 31, 2021, when they won 149-146 in their own stadium.

On another subject, the NBA trade deadline is today at 3 p.m. ET. Rumors are mounting in league circles about a potential James Harden-Ben Simmons trade. During the offseason in 2021, 76ers’ general manager Elton Brand was demanding multiple first-round draft picks for his star point guard. Per sources, maybe Tyrese Maxey and Matisse Thybulle will get packaged into the deal, too.

Entering this intraconference rematch, Washington is a three-point favorite. They lost Bradley Beal for the rest of the season. Though, consider the Wizards “the best of the worst” in a sense. Head coach Wes Unseld Jr. knows his team plays with greater energy at home. In short, pick the Wizards to win, they will cover the spread and the total will go under 217. To learn more about basketball betting, check out our handicap betting guide. Other NBA Picks are on the main page.