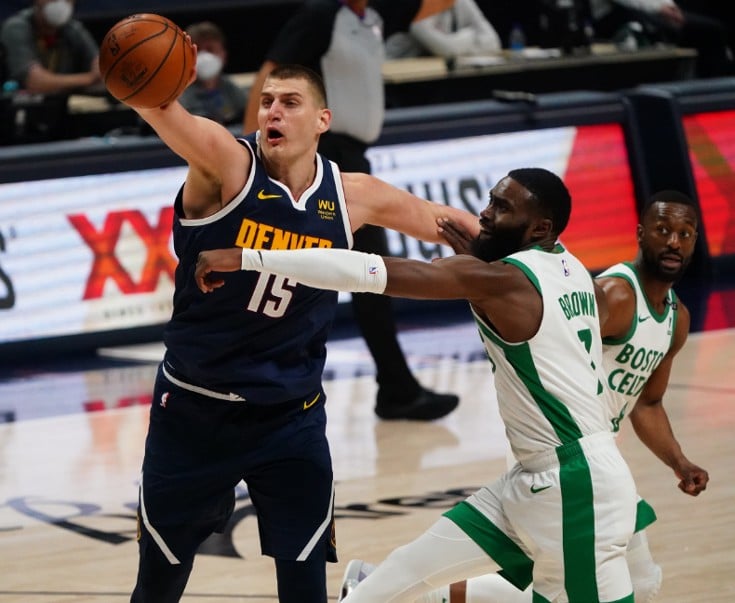 In tonight’s interconference battle, the Denver Nuggets (30-24, 24-30 ATS) are aiming to defeat the Boston Celtics (31-25, 27-28-1 ATS); NBA picks are available here. Will Jayson Tatum and the Celtics win their fourth consecutive game versus the Nuggets? In addition to the starting lineups, our top NBA picks and betting trends are featured below.

All Nuggets vs Celtics betting odds can be found at BetOnline

Furthermore, in the Nuggets’ 132-115 home win over the Knicks on Tuesday, Nah’Shon Hyland scored a team-high 22 points in 25 minutes played. Center Nikola Jokic finished his performance with another double-double, amassing 21 points, 11 rebounds and 7.0 assists in 30 minutes of action. Denver has won seven of its last 10 contests. On top of winning back-to-back games, the team is now 15-14 away, 15-10 at home and 13-16 ATS on the road this season.

As for the Celtics, on Tuesday, in their 126-91 road win against the Nets, guards Jaylen Brown and Marcus Smart each scored 22 points. Forward Jayson Tatum also closed out his performance with 19 points, 5.0 rebounds and 4.0 assists in 27 minutes played. Boston has won eight of its previous 10 games. Not only are the C’s on a six-game winning streak, the team is 18-10 at home, 13-15 away and 12-15-1 ATS at home.

Per ESPN’s Basketball Power Index, the Celtics have a 69.7% probability of winning.

Taking into account other meetings, in the past three head-to-head matchups, the Celtics are 3-0 versus the Nuggets. On Apr. 11, 2021, the last time these teams met during the regular season, Boston won 105-87 at Ball Arena. The Nuggets have not defeated them since Nov. 22, 2019, when they won 96-92 in their own stadium.

In other news, Celtics’ forward Jayson Tatum was asked about Derrick White’s addition to the team. He labeled the player “a really high IQ guy.” Tatum and White played with one another on Team USA during the 2020 Summer Olympics in Tokyo. The three-time NBA All-Star is always open to play alongside a new teammate.

Jayson Tatum called Derrick White “a really high IQ” guy, a great defender and somebody you’re just happy to have on your team. They have played together with Team USA.

Entering this interconference contest, Boston is a five-point favorite. Based on injuries alone, the C’s have the advantage. They are striving to turn their season around, and this is evident due to the trade moves. In short, think about picking the Celtics to win, they will cover the spread and the total will go under 217. If you have never placed a bet, check out our handicap betting guide. Other NBA Picks are on the main page.