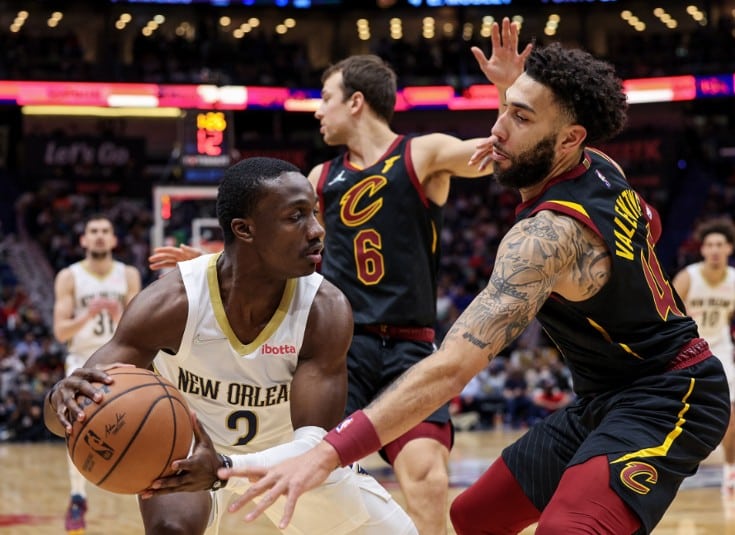 In tonight’s interconference rematch, the New Orleans Pelicans (18-31, 22-26-1 ATS) are playing the Cleveland Cavaliers (30-20, 31-17-2 ATS); NBA picks are available here. Can the Cavs earn their first win versus the Pelicans since Mar. 30, 2018? Including the starting lineups, our top NBA picks and betting trends are featured below.

All Pelicans vs Cavaliers betting odds can be found at BetOnline

Furthermore, on Saturday, in the Pelicans’ 107-97 home loss versus the Celtics, Jose Alvarado led his team in scoring, putting up 19 points in 20 minutes spent on the court. Center Willy Hernangomez finished his performance with 14 points, 5.0 rebounds and 2.0 assists in 30 minutes played. New Orleans has won just four of its past 10 contests. On top of their three-game losing streak, the team is now 11-13 at home, 7-18 away and 9-16 ATS on the road this season.

Meanwhile, in the Cavaliers’ 115-105 upset loss at Little Caesars Arena against the Pistons on Sunday, guard Darius Garland scored a team-high 24 points in 36 minutes of action. Forward Evan Mobley contributed 18 points, 9.0 rebounds and 2.0 assists in 37 minutes played as well. Cleveland has won eight of its previous 10 games. After this puzzling defeat, the Cavs are 15-9 at home, 15-11 away and 16-8 ATS at home.

Per ESPN’s Basketball Power Index, the Cavs have a 67.7% probability of winning.

Regarding other matchups, in the last seven head-to-head meetings, the Pelicans are an unstoppable 7-0 against the Cavs. On Dec. 28, 2021, the first meeting during this regular season, New Orleans won 108-104 at Smoothie King Center. Therefore, the Cavs have not defeated them since Mar. 30, 2018, when they won 107-102 at Rocket Mortgage FieldHouse.

In other news, after the Cavs lost to the Pistons in what was arguably their worst loss of the season, Cavs head coach J.B. Bickerstaff mentioned to reporters, “I think it’s all part of handling success. We thought it was going to come easy. You don’t pick and choose in the NBA.” That was Detroit’s eighth home win of the season.

#Cavs loss against Detroit on Sunday night was easily the worst of the season. It was also a wake-up call the team clearly needed.

“I think it’s all part of handling success. We thought it was going to come easy. You don’t pick & choose in the NBA”https://t.co/ML0LyRXxWO

Moreover, the Pelicans have a lot of uncertainties on their injury report. Ingram, Hart and Valanciunas are all listed as questionable. Perhaps, the team’s seven-game win streak against the Cavs will finally end in this one. Taking everything into account, contemplate picking the Cavs to win, they will cover the spread and the total will go over 210. To learn more about NBA betting, read our handicap betting guide. Other NBA Picks are on the main page.