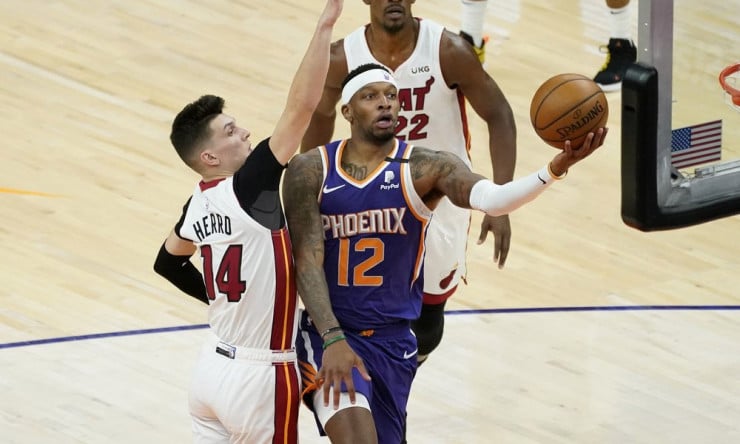 Game 3 of the Western Conference Finals takes place at 9pm ET on Friday. Our experts have made their predictions and betting picks for the Clippers vs Suns at the Staples Center.

Cynics will tell you that L.A. is a city of a million shattered dreams, and if Deandre Ayton’s last second alleyoop slam-dunk is anything to go by, those cynics aren’t exactly wrong.

The Phoenix Suns marched into a 2-0 series lead vs. the Clippers as a result of Ayton’s heroics. The 104-103 victory meant Monty Williams team now takes a firm grasp of the Western Conference finals.

Despite being down 2-0 in the series, it appears the average American bettor hasn’t given up hope on the Clippers staging part one of a comeback in game 3. Indeed, why would they? We’ve seen way over 400 teams return from a 2-0 deficit in the playoffs over the years. Plus, if Paul George (26 pts in Game 2) decides to wage war again, the Clippers do have half a chance, even without Leonard…

Besides, why wouldn’t you place a couple wagers on a mild underdog on the NBA betting lines?

All odds from Bovada Sportsbook. New customers get $750 free to bet on Suns @ Clippers

Other than the pain of a last second defeat, the big news coming out of the Clippers camp remains the fact that the team’s best player, Kawhi Leonard, is still out injured.

Leonard had averaged over 30.0 points per game during the playoffs until going down with a knee injury towards the end of Game 4 vs. Utah in the last round. The current prognosis is not good – he will almost certainly miss out again.

There is series-hope for Clippers fans in the form of SG Paul George, who himself is averaging 26.6 points per game in the postseason; not to mention the fact that L.A. has twice before returned from a 2-0 deficit in the playoffs. But they have to get something going in Game 3 – no team has ever returned from 3-0 down in NBA playoff history.

Nevertheless, what hope is left is dangling by a thread at present. Up against a full-strength Phoenix team that’s riding high on the confidence of a last-minute win, it’s going to be tough evening’s work for George, Jackson and co. come Thursday night.

That said, L.A. does have home-court advantage and di just lose by the 1 point. So, it’s little surprise the two teams have been given similar odds – Game 3 is anyone’s game.

The Suns did what they needed to do, took advantage of being at home for games 1 and 2 and now take a lead to LA. Game 2 was on a knife edge throughout, so they’re not as dominant over the Clippers as some may have thought, but the 2-0 lead is huge. As mentioned above, they’ll be hoping that Leonard can’t make it to the court on Thursday night, but even if he does, they can rely upon the likes of Devin Booker, Cameron Payne and game 2 hero Deandre Ayton to stifle the Clippers. They’ve now won 9 straight in the playoffs and they’ll take some stopping to make it 10.

Chris Paul is expected back from a stint on COVID protocol soon. But Game 3 might come too early. Expect Paul to miss out again.

Other than that, the Suns are surely shining bright en route to Los Angeles following Ayton’s heroics in the previous clash. The Clippers have caused them problems throughout the first two games, but the Suns seem to have that little bit extra in the tank: more guile; more nous, and, even if Leonard could take to the court with the Clippers, – arguably – more talent.

Devin Booker has been in superb form in the series thus far, putting up 40 points over the course of the first two contests – look for him on the player prop market.

Overall, there’s a reason the Suns have been made favorites by the NBA oddsmakers, and there’s no reason to expect anything other than a continuation of the their dominance in Game 3…

We’ve spent all this time waxing lyrical about Phoenix, but the Clippers deserve a result. They have pulled out all the stops in the absence of Leonard and, in our humble opinion, eventually hard work pays off.

We are vouching for the homecourt underdogs on the moneyline: Clippers to win at -107

Kane Pepi is a British researcher and writer that specializes in finance, financial crime, and blockchain technology. Now based in Malta, Kane writes for a number of platforms in the online domain. In particular, Kane is skilled at explaining complex financial subjects in a user-friendly manner. Academically, Kane holds a Bachelor’s Degree in Finance, a Master’s Degree in Financial Crime, and he is currently engaged in a Doctorate Degree researching the money laundering threats of the blockchain economy. Kane is also behind peer-reviewed publications - which includes an in-depth study into the relationship between money laundering and UK bookmakers. You will also find Kane’s material at websites such as MoneyCheck, the Motley Fool, InsideBitcoins, Blockonomi, Learnbonds, and the Malta Association of Compliance Officers.