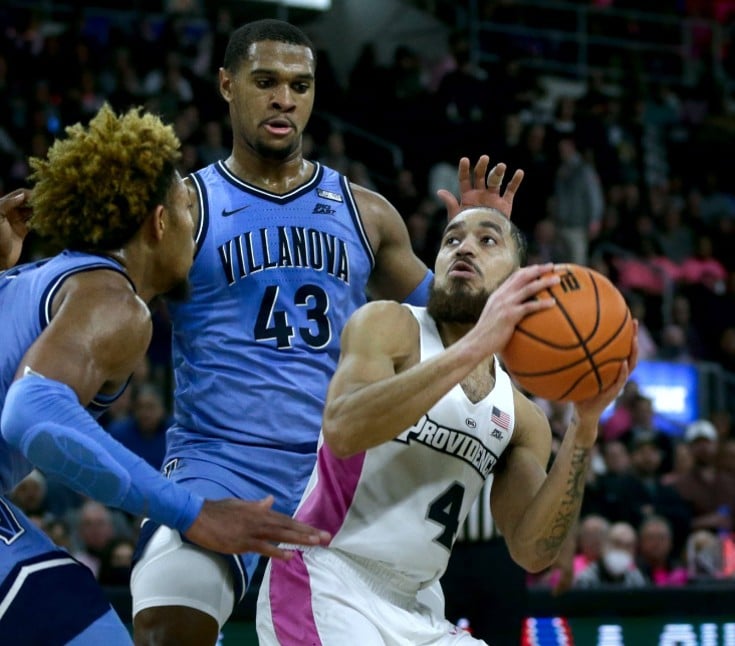 In Tuesday night’s Big East Conference rematch, the No. 9 Providence Friars are seeking revenge on the No. 11 Villanova Wildcats; NCAA picks are featured here. Keep scrolling for Friars vs Wildcats preview content.

Will Justin Moore and the Wildcats spoil the Friars’ three-game win streak? Nate Watson is leading Providence in scoring, averaging 14 points per game. Along with the starting lineups, our top NCAA picks and betting trends are posted below.

All Friars vs Wildcats betting odds can be found at BetOnline

Leading into tonight’s interesting rematch, the No. 9 Providence Friars are striving to expand their three-game win streak. The Friars’ last loss was on Feb. 15, when the No. 11 Villanova Wildcats defeated them 89-84 on the road. Center Nate Watson led his team in scoring with 20 points. Jared Bynum contributed 18 points, 2.0 rebounds and 3.0 assists in 33 minutes played as well.

Providence has won nine of its previous 10 games played. The total has over in four of the Friar’s past five matchups versus Big East opponents. Now, the team is 7-1 away, 16-1 at home and 6-2 ATS on the road. If you’re searching for a quick prediction, NCAA picks are below.

Happy Birthday to our Strength Coach , John Shackleton – The best in the business . Thank you for all you do to keep our guys performing at the highest level ! @shack_fit pic.twitter.com/aGVyUTELYX

Moreover, in the No. 11 Villanova Wildcats’ 71-69 upset road loss versus the No. 18 Connecticut Huskies, guard Collin Gillespie scored a team-high 17 points. Forward Brandon Slater closed out his outing with 15 points, 4.0 rebounds and 2.0 assists in 37 minutes of action. Villanova committed 14 turnovers in that matchup.

Referencing ESPN’s Basketball Power Index, the Wildcats have a 88.4% probability of winning.

Villanova has won eight of its past 10 contests. The Wildcats’ loss to the Huskies also snapped their five-game winning streak. Their only other defeat in the month of February was the team’s 83-73 loss versus Marquette. Villanova is 11-1 at home, 9-5 away and 7-5 ATS at home this season.

Reviewing other head-to-head encounters, in the previous three matchups, the Wildcats are 2-1 against the Friars. Although Providence lost against them in the Feb. 15 meeting, the team beat Villanova 54-52 at Dunkin’ Donuts Center on Mar. 6, 2021. Providence vs Villanova picks are below.

Plus, the total has gone under in five of Villanova’s past seven contests played in the month of March. With the Wildcats being 9.5-point favorites, they are the better pick to win. Though, the Friars will cover the spread, and the total will go over 135. As we approach March Madness, inexperienced bettors should read over our handicap betting guide. Other NCAA picks are on the main page.