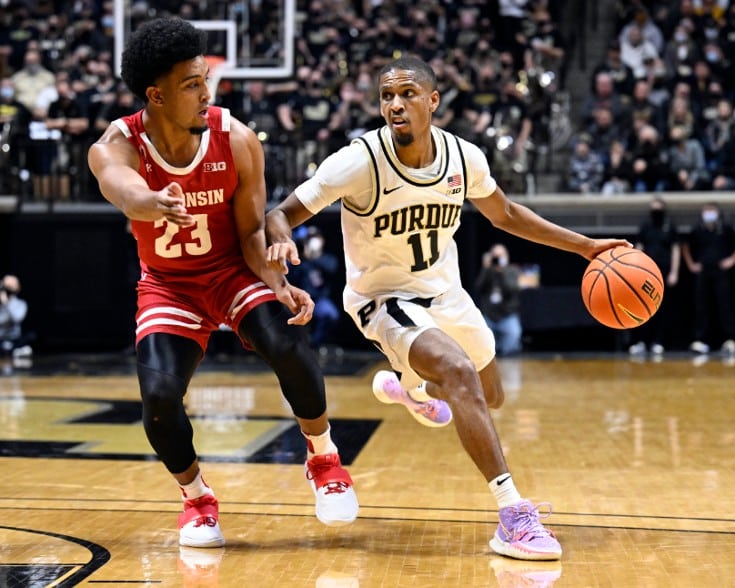 In tonight’s Big Ten thriller, the No. 8 Purdue Boilermakers are playing the No. 10 Wisconsin Badgers; NCAA picks are viewable here. Purdue is averaging 81 points per game. Continue reading for Boilermakers vs Badgers preview content.

Can Jonathan Davis and the Badgers upset the Boilermakers to extend their winning streak to five games? The sophomore guard is averaging 20.5 points per game this season. Including the starting lineups, our top NCAA picks and betting trends are featured below.

All Purdue vs Wisconsin betting odds can be found at BetOnline

For Tuesday night’s Big Ten rematch, the No. 8 Purdue Boilermakers are focusing on bouncing back from their 68-65 road loss versus the Michigan State Spartans. In their three-point defeat, center Zach Edey scored a career-high 25 points in 22 minutes played. Guard Jaden Ivey also accumulated 16 points, 4.0 rebounds and 1.0 assist in 37 minutes spent on the court.

Purdue has won eight of its past 10 contests. Not to mention, the Boilermakers are 8-0 ATS in their last eight games played on a Tuesday. Counting their loss to the Spartans, the team is 5-4 away, 15-1 at home and 3-5-1 ATS on the road. NCAA picks are below.

Purdue is 1-of-9 from 3-point range. pic.twitter.com/e2EKDjpgyg

Additionally, in the No. 10 Wisconsin Badgers’ 66-61 road win over the Rutgers Scarlet Knights on Saturday, guard Jonathan Davis led his team in scoring with 19 points. Plus, guard Brad Davison amassed 14 points, 4.0 rebounds and 2.0 assists in 36 minutes of action. The Badgers shot 9-for-20 (45%) from behind the arc.

Per ESPN’s Basketball Power Index, the Boilermakers have a 57.4% chance of winning.

Wisconsin has won eight of its last 10 games played. The Badgers have won four straight contests. They have not lost a game since Feb. 12, when Rutgers defeated them 73-65. Just two losses in the month of February is terrific. Wisconsin is now 11-3 at home, 9-2 away and 6-8 ATS at home this season.

Prior to placing a bet, individuals should check out other head-to-head matchups. In the past three meetings, the Badgers are 2-1 versus the Boilermakers. On Jan. 3, the first time these teams played one another during this regular season, Wisconsin won 74-69 on the road. Purdue vs Wisconsin picks are below.

Despite winning four consecutive games, the Badgers are 2.5-point underdogs on their home court. Purdue is 7-2-1 ATS in its previous 10 head-to-head matchups against Wisconsin. Nonetheless, the Badgers are difficult to beat at home.

So, the Badgers will win, they will cover the spread and the total will go under 143.5. They only have three losses at Kohl Center this season. For March Madness, first-time NCAA basketball enthusiasts should review our handicap betting guide. Other NCAA picks are on the main page.