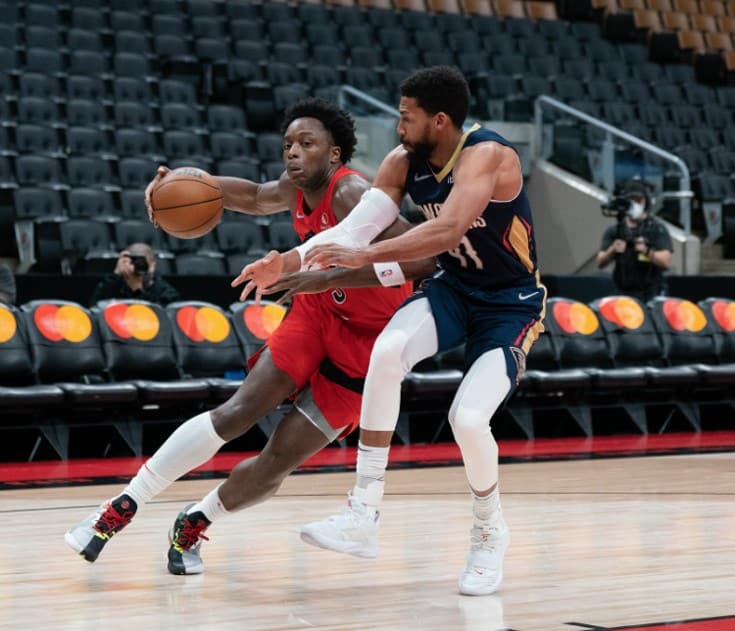 In Monday night’s interconference rematch on Valentine’s Day, the Toronto Raptors (31-24, 32-22-1 ATS) are facing off versus the New Orleans Pelicans (22-34, 27-28-1 ATS); NBA picks are available here. Will Brandon Ingram and the Pelicans earn their first head-to-head win against the Raptors this season? Along with the starting lineups, our top NBA picks and betting trends are posted below.

All Raptors vs Pelicans betting odds can be found at BetOnline

Additionally, on Saturday, in the Raptors’ 110-109 home loss versus the Nuggets, center Pascal Siakim earned another double-double. He amassed 35 points, 10 rebounds and 7.0 assists in 42 minutes played. Guard Fred VanVleet finished his performance with 25 points, 5.0 rebounds and 5.0 assists in 38 minutes spent on the court. Toronto has won eight of its past 10 games. The loss to Denver snapped their eight-game win streak. Now, they are 15-11 away, 16-13 at home and 16-9-1 ATS on the road this season.

As for the Pelicans, in their 124-114 home loss against the Spurs on Saturday, guard CJ McCollum closed out his outing with one more double-double. He accumulated 36 points, 11 rebounds and 5.0 assists in 36 minutes played. Forward Brandon Ingram piled on 22 points, 2.0 rebounds and 2.0 assists in 35 minutes of action. New Orleans has won four of its last 10 contests. Including this defeat, the Pelicans are 12-15 at home, 10-19 away and 14-12-1 ATS at home.

Per ESPN’s Basketball Power Index, the Raptors have a 55.6% probability of winning.

In the previous three head-to-head matchups, the Pelicans are 2-1 versus the Raptors. On Jan. 9, 2022, the first time these teams met during this regular season, Toronto won 105-101 at Scotiabank Arena. The Pelicans last defeated them on Jan. 2, 2021, when they won 120-116 at Smoothie King Center.

On another topic, after New Orleans lost to Denver on Saturday, Pelicans’ guard CJ McCollum was interviewed by reporters. He said, “I’ve got to be better on the defensive end, when it switch and when not to switch. I’ve got to tighten that up.” The guard has to adjust to a new defensive system. So far this season, McCollum is averaging 20.8 points, 4.5 rebounds and 4.6 assists per game.

CJ McCollum: "I've got to be better on the defensive end… when to switch, when not to switch. I've got to tighten that up." Added that he's getting used to parts of different defensive system from what he did in nine years with Portland

Entering tonight’s interconference rematch, the Raptors are four-point favorites on the road. Oddsmakers have them favored because they are healthy and consistent. Not to mention, the team won the previous meeting in January. All things taken into account, pick the Raptors to win, they will cover the spread and the total will go over 223. To learn more about sports betting, read our handicap betting guide. Other NBA Picks are on the main page.