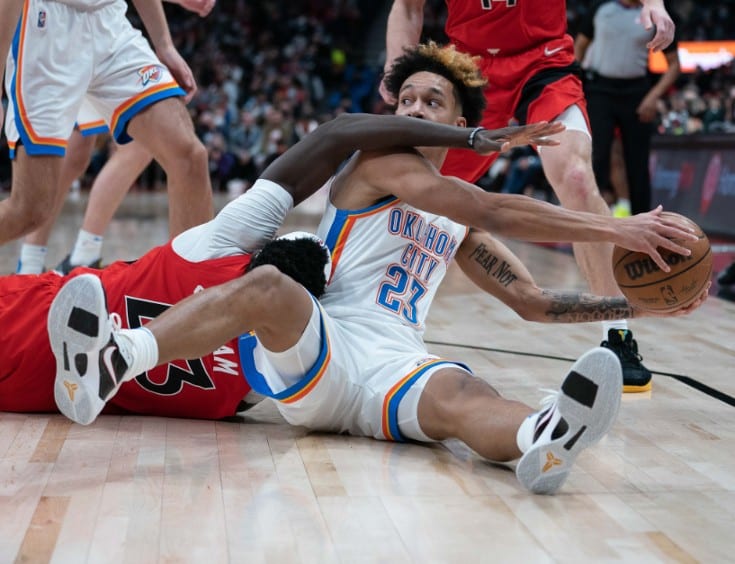 In Wednesday night’s interconference rematch, the Toronto Raptors (29-23, 30-21-1 ATS) are aiming to defeat the Oklahoma City Thunder (17-36, 32-18-3 ATS); NBA picks are featured here. Will Pascal Siakim and the Raptors win their seventh consecutive game? Including the starting lineups, our top NBA picks and betting trends are posted below.

All Raptors vs Thunder betting odds can be found at BetOnline

Moreover, in the Raptors’ 116-101 road win over the Hornets on Monday, center Pascal Siakim finished his performance with a double-double. He accumulated 24 points, 11 rebounds and 8.0 assists in 43 minutes on the court. Likewise, guard Gary Trent Jr. closed out his performance with 24 points, 3.0 rebounds and 2.0 assists in 34 minutes played. Toronto has won eight of its past 10 contests. On top of their six-game winning streak, they are 13-11 away, 16-12 at home and 14-9-1 ATS on the road.

As for the Thunder, on Monday, in their 110-98 home loss versus the Warriors, forward Luguentz Dort led his team in scoring, putting up 26 points in 38 minutes spent on the court. Forward Darius Bazley ended his night with 20 points and 8.0 rebounds in 37 minutes played as well. Oklahoma City has won three of its last 10 games. The Thunder have lost back-to-back games; they are 9-17 at home, 8-19 away and 15-8-3 ATS at home this season.

Referencing ESPN’s Basketball Power Index, the Raptors have a 71.4% probability of winning.

Prior to placing a bet, remember to review other head-to-head contests. In the previous three matchups, the Thunder are 2-1 against the Raptors. On Dec. 8, 2021, the first time these teams met during this regular season, Oklahoma City edged Toronto 110-109 at Scotiabank Arena. The Raptors last defeated them on Apr. 18, 2021, when they won 112-106 at Paycom Center.

Additionally, Raptors’ rookie guard Scottie Barnes will be participating in the Rising Stars Game and the Skills Challenge during All-Star Weekend. His competition includes Cade Cunningham, Josh Giddey, Darius Garland and other players. Barnes is averaging 14.8 points, 7.8 rebounds and 3.4 assists per game this season.

Scottie Barnes, who was already participating in the Rising Stars Game at all-star, will also be in the Skills Challenge. His competition: Fellow rookies Cunningham and Giddey, 3 players from the host Cavs (Allen, Garland, Mobley), and 3 Antetokounmpos (Giannis, Thanasis, Alex)

Leading into tonight’s game, Toronto is a 9.5-point favorite. Without Shai Gilgeous-Alexander, the Thunder have played worse this season. The team’s 9-17 record at home speaks for itself. Taking everything into account, pick the Raptors to win, the Thunder will cover the spread and the total will go over 209. If you want to learn more about NBA betting, feel free to read our handicap betting guide. Other NBA Picks are on the main page.