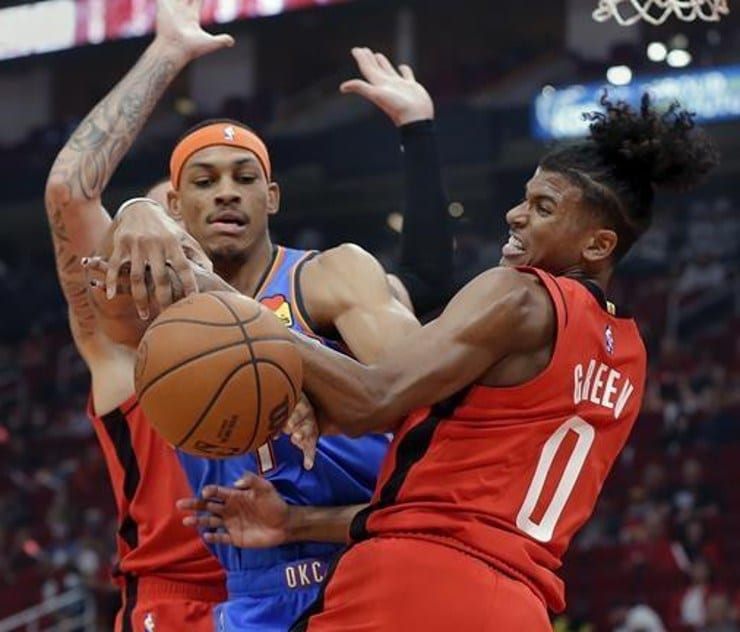 ESPN’s Basketball Power Index: Thunder have a 62% chance of winning

Referencing Land of Basketball’s statistics, these Western Conference teams have played 237 regular season games all-time against one another. The Thunder are 116-111 versus the Rockets. However, in the last three head-to-head meetings, Oklahoma City is 2-1 against Houston. On Oct. 22, 2021, the Rockets won 124-91 at Toyota Center. Not to mention, these two below-.500 teams are 5-5 in their previous 10 head-to-head contests.

On Tuesday, the Rockets assigned forward Usman Garuba to the Rio Grande Valley Vipers, the organization’s G League affiliate. In seven NBA games played, Garuba averaged 1.7 points, 2.6 rebounds and nearly 1.0 assist per game this season. The rookie was selected 23rd overall by the team in the 2021 NBA Draft. The young forward was born in Azuqueca de Henares, Spain.

Additionally, in the Rockets’ 136-102 blowout loss on the road versus the Grizzlies on Monday, rookie guard Jalen Green led his team in scoring, finishing his effort with 15 points in 28 minutes played. Forward Jae’Sean Tate accumulated 14 points and 9.0 rebounds in 25 minutes spent on the court, too. While the Rockets did score 31 points in the fourth quarter, they also surrendered just as many.

Furthermore, on Monday, in the Thunder’s 103-90 away loss against the Heat, forward Luguentz Dort scored a team-high 20 points in 31 minutes of action. Center Jeremiah Robinson-Earl closed out his performance with 16 points, 5.0 rebounds and 2.0 assists in 26 minutes on the court. Despite the Thunder losing by 13 points, they are playing better than the Rockets.

Oklahoma City shot 34-for-83 (41%) from the field and 15-for-41 (36.6%) from three-point range. The Heat were held to 43 first-half points, but the Thunder have not yet established a consistent offense this season. Their four-game winning streak was snapped against the Nets on Sunday, and they have lost five of their past 10 games. Now, the team is 3-4 at home, 2-4 away and 4-3 ATS at home.

Moreover, the total for tonight’s intraconference matchup is set at 213. According to the spread consensus, 90% of gamblers are predicting the Thunder will cover the spread at Paycom Center. Upon further review of the total consensus, 55% of bettors are hoping the total will go under 213. Leading into this game, Houston is 1-1 as a selected favorite and 0-12 as an underdog, while Oklahoma City is 0-0 as a favorite and 5-8 as an underdog.

As for the Thunder, they are 5-2 ATS in their previous seven performances. Also, the total has gone under in seven of the team’s last eight games. And, Oklahoma City is 6-14 SU in the team’s past 20 contests. Next, they are 4-2 SU in their previous six matches played in the month of November. Lastly, they are 2-4 ATS in their past six contests played versus Southwest Division opponents. Therefore, pick the Thunder to win and they will cover the spread.

Pick the Thunder to win at home, they will cover the spread and the total will go under 213. Oklahoma City is a 3.5-point favorite with BetUS.