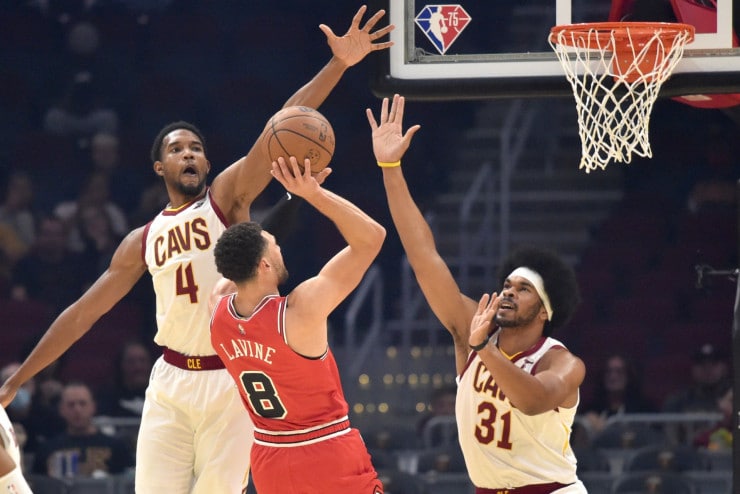 We’re about a month into the 2021-22 NBA season and we’ve already seen some serious movement on the awards front.

Here, we’ll analyze this season’s rookie class thus far while also looking at how some players odds have vastly improved, while others have taken a dip in comparison to preseason odds for the Rookie of the Year Award.

Movement at the Front

Starting at the top, we’ve already seen a shift in the odds, as Houston Rockets guard Jalen Green, the second overall pick from this past draft class, has seen his odds decrease. He started as the preseason favorite for the award at +200 odds and has since slid to +600 on Bovada.

Green hasn’t been playing badly by any means. In fact, he’s quite the entertaining player to watch. The problem right now is consistency. He’s scored over 23 points in three games this season, including a 30-point performance against the Celtics in which he shot an astounding 8-for-10 from three. The problem is when he follows it up with just seven or nine the next night.

Since that game against the Celtics, he has shot 21 percent from deep. He attempts 13.3 field goals a night and 6.7 of them are from deep. With as good of an athlete Green is, it’s his responsibility to start driving to the basket, especially with shooting numbers like that.

Jalen Green. The violence of that, my lord. pic.twitter.com/YjoWcAHecT

Like Anthony Edwards last year, it wouldn’t surprise me to see Green start to put it together and start to have more games that resembles his performance against the Celtics.

I would wait on getting in on Green for the award, just in case he slides a bit more then consider looking at his odds again around Christmas or the All-Star Break.

The new favorite according to Bovada is Cleveland Cavaliers big man Evan Mobley at +180. However, this is almost certainly due to change, as Mobley will miss 2-to-4 weeks with a right elbow sprain.

Before the injury, Mobley had looked great. His game feels fluid on offense, which isn’t necessarily a typical trait rookie/young big men possess. Instead, Mobley can take other bigs off the dribble and has also shown his ability to pull opposing bigs away from the basket and make him respect his mid-range to outside shot.

But where Mobley has arguably shined the most has been on the defensive end. He is already a feared defender when opponents drive to the rim. He averages 1.6 blocks per game, as well as a steal and 2.5 assists. You’re probably thinking that 1.6 isn’t even that high, but when you watch this clip and see how he doesn’t just block shots, but affects them as well, you’ll understand the monster defensive potential he still has.

Considering Mobley is going to miss some time, I would wait and see how the market reacts to the injury as well as the level of play from the other guys on this list in the meantime.

Detroit Pistons guard Cade Cunningham has been so-so this season. While certainly an upgrade to that roster, he hasn’t necessarily provided the spark a franchise would hope for from a No. 1 overall pick. We already had to wait to see him, missing five of his first six career games.

Since then his scoring numbers replicate Green’s at 13.4 per game. His shooting touch from deep will also need to improve (27.6%), especially if he’s going to attempt over seven per game. He averages 10.8 drives per game, which is in the top 40, but is only averaging 1.8 free-throw attempts per game. He’s made 92.9 percent of them this season, so I’m sure the Pistons would like to see the 6-foot-8 guard get to the line more.

The one thing people raved about when Cade was coming out into the draft was his all-around great game and that he would be a great playmaker on this level. He currently averages as many turnovers per game as assists. He’s still hanging around near the top with +500 odds, but if certain guys keep up their play and Cunningham doesn’t step up his, I could see his odds falling.

One player that has moved himself from +1400 all the way to +300 and second-best odds has been Toronto Raptors forward Scottie Barnes.

In my opinion, Barnes has been the most impressive. A lot of people knew he was going to be a great defender from the moment he came in and he has been, showing the ability to guard about every position on the floor.

Barnes hasn’t been asked to utilize his playmaking ability as much in the pros despite some flashes here and there, he has seen significant jumps in other statistics in his pro career. He averaged just 11 points per game in college and is averaging 16.3 as a pro. He’s also doubled his rebounding numbers from 4.1 at Florida State to 8.3 with the Raptors, including almost three offensive rebounds per game.

You’re probably wondering why I’m not knocking on Barnes’ poor 3-point shooting mark of 18.2 percent. My answer would be that he hasn’t needed to. He doesn’t even attempt one per game and has been able to put up higher scoring numbers then either Cunningham or Green.

Another one of the biggest movers has been Indiana Pacers forward Chris Duarte. Every time Duarte was mentioned in draft coverage of any kind, people said he would be able to contribute right away at 24 years old. It was so overused, but has turned out to be 100 percent true.

Duarte started his NBA career hot, scoring 27 points in his NBA debut and averaged 16.9 points per game on 43.6 percent shooting and 42.9 percent from deep. Since then, teams have started to pay more attention to him. Other players on his team have also returned from injury, leading to less time on the floor.

In his last five games, Duarte has averaged just 9.6 points per game. I’m not saying this is what he’s really going to be, but we may have jumped the gun a little with Duarte.

He has seen his odds move from +3500 in the preseason to the current price of +1500. If you have a ticket from the beginning of the year on Duarte, hold on to it tight. But right now, I’d say there’s not much value at +1500.

Orlando Magic point guard Jalen Suggs has also been one of the biggest movers in terms of the odds so far, but in the wrong direction.

Suggs was quite the impressive player at Gonzaga. While he wasn’t the team’s main scoring option by any means, Gonzaga fans trusted him with the game in his hands. However, some scouts were hesitant on Suggs in the draft process, saying they feared his game would be harder to translate to the NBA, not being either the fastest nor athletic.

On top of that, his shooting numbers aren’t there. He’s shot just 20.3 percent from deep and 31.2 percent overall. He was a trendy pick coming into the season, but if you’re someone who has him closer to his preseason odds than current odds, the best you can do at this point is a turnaround. However that looks even less likely after watching the play of second-year guard Cole Anthony.

The season is obviously still in its infancy with many things that could happen to sway the odds tremendously from now until regular season’s end. We will continue to update you as long as the season goes along.

Looking to bet on the rookie of the year?

If you are looking to bet on the rookie of the year, make sure to use one of the numerous US online sportsbooks or one of the offshore betting sites you can even bet on the go with the best mobile sports betting apps.