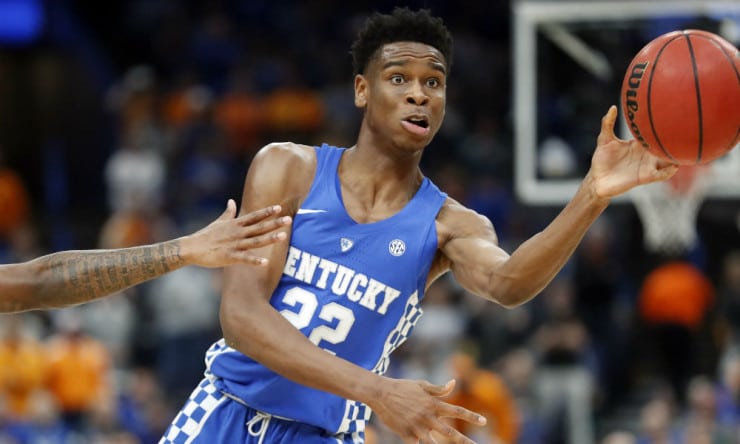 The Saint Peter’s Peacocks are set to take on the Kentucky Wildcats in the first round of the NCAA tournament on Thursday at 7:10. St Peters is going to be coming into this one as the number 15 seed after winning the MAAC Conference and going 19-11 the season. Kentucky on the other hand is going to be coming in as the number two seed after finishing 26-7.

The Peacocks and the Wildcats will meet at the Gainbridge Fieldhouse for this one. Kentucky should be able to take care of business, but if Saint Peter’s defense can continue defending at a high level against one of the best teams in the country, this could be one of the crazier March Madness upsets that we have ever seen.

There are currently no players on either teams’ injury report for Thursday night’s game. Neither team should have any late scratches.

Kentucky Looking To Cake Of Business

When thinking about the Wildcats, you think about one of the top programs in college basketball history. This is a game that they should be able to walk away with, considering just how much more talented they are than the Saint Peter’s Peacocks.

Kentucky’s going to be coming into this one after finishing 26-7 overall and 14-4 in the star-studded SEC. They ended up losing in the SEC tournament to the Tennessee Volunteers, 62-69.

Keion Brooks Jr. led the way with 19 points in the loss to Tennesee.

Saint Peter’s Has To Keep Defending

The Saint Peter’s Peacocks are a small Jesuit school in Jersey City, New Jersey. This is obviously going to be an extremely tough game for the Peacocks to win, but this team is relentless and they defend at an extremely high level.

They’re not going to be scared coming into this one; they’re going to do everything they can to at least make it tough on this Wildcats team. Saint Peter’s is going to be coming in after winning the conference tournament where they were able to beat Monmouth in the championship, 60-54.

In that game, Doug Edert led the way with 20 points for the Peacocks.

For this game, I really like the under in this one. I do have some more doubts that Saint Peter’s might not be able to contain a high powered offense like Kentucky, but if what they have shown all season long is any indication, I think that they could keep this one in range, and they’re going to have to do so by playing high-level defense, which means that this should be a low-scoring game.

Get free CBB bets for the Saint Peter’s vs Kentucky game at BetOnline below.