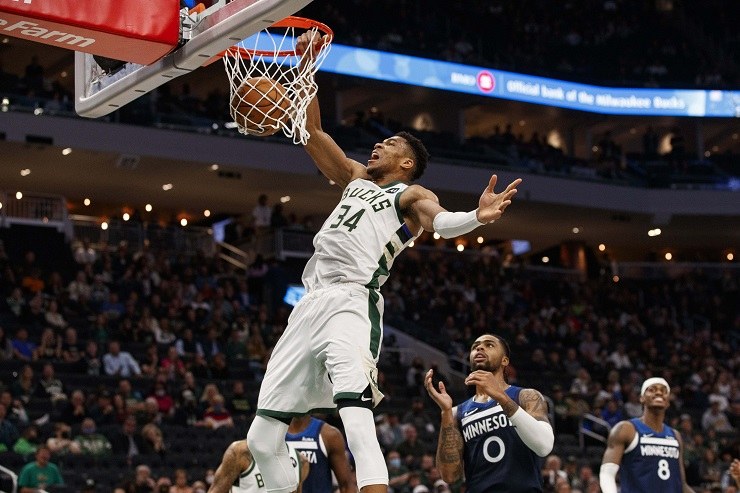 The San Antonio Spurs will head on the road to the Fiserv Forum on Saturday evening as they continue their three-game road swing versus the Milwaukee Bucks.

Since opening the season with a blowout win over the Orlando Magic, the Spurs have dropped four consecutive contests, including back-to-back games by five points or fewer. San Antonio enters with a disappointing 1-4 overall record while the Bucks have won three of their first five games to come in with a 3-2 mark.

Can Milwaukee defend its home court with a win over the Spurs on Saturday night?

NBA Analyst John Hollinger has been impressed with Spurs’ big man Jakob Poeltl this season. The former Memphis Grizzlies VP of Basketball Operations sent out a tweet after San Antonio’s last game, praising Poeltl’s defense and calling for the big man to be named to the NBA’s All-Defensive team.

On the other side, Grayson Allen continues to be a key cog in the Bucks’ starting lineup. The former Duke star has scored in double-figures in each of Milwaukee’s first five games while providing timely outside shooting and solid defense for the Bucks. Through five games, Allen has averaged 13.2 points per game despite shooting just 40.7 percent from the field, his worst mark since his rookie season in Utah in 2018-19.

San Antonio will prepare for Saturday’s matchup in Milwaukee without sharpshooter Doug McDermott. While the MRI on McDermott’s knee came back negative, the forward is still expected to miss the Spurs’ next three games.

On the other hand, the Bucks have a few players on the injury report heading into Saturday’s contest. Point guard Jrue Holiday and starting center Brook Lopez were both ruled out while Bobby Portis is also out as he improves his condition before returning to competition.

The Spurs dropped their fourth consecutive contest on Thursday night, falling short on the road 104-99 versus the Dallas Mavericks. Dejounte Murray finished with 23 points and eight assists while Jakob Poeltl added 14 points and 13 rebounds for the Spurs, who shot 12-for-30 from 3-point range in the loss.

Lonnie Walker IV stepped into the starting lineup in place of McDermott last game. A streaky scorer, Walker appears to have made a leap in his fourth NBA season. Through six games, 22-year-old is averaging a career-high 15.0 points per game while shooting 45.8 percent from the field, also the best mark of his career.

Despite coming into the season without an extension on his rookie deal, Walker has flashed more confidence as a go-to scorer off of the bench. He’s also made improvements from beyond the arc, where he has shot 36.4 percent on 6.6 attempts per game, up nearly two full attempts from last year.

Giannis Antetokounmpo finished with 40 points, 16 rebounds, and seven assists but it wasn’t enough for the Bucks, who came up short 113-108 at home against the upstart Minnesota Timberwolves. Khris Middleton had 16 points and Grayson Allen chipped in 13 for the Bucks, who shot just 14-for-51 from 3-point on the night. In fact, Antetokoumpo was tied for the team lead with three made 3-pointers (3-for-6) on the night.

Speaking of Antetokoumnpo, the reigning NBA Finals MVP has added a reliable jump shot to his offensive arsenal this season. While the sample size is still small, Antetokounmpo has been more effective when he can’t get all the way to the rim this season. He has made 40 percent of his attempts from between 16-feet and the 3-point line and has knocked down a career-high 35.3 percent of his 3-point attempts.

The Spurs have dropped four in a row and will be up against a Bucks’ team that is coming off of a disappointing home loss to the Minnesota Timberwolves.  Without Holiday and Lopez in the lineup, Milwaukee struggled from beyond the arc against the Timberwolves and that could be the case once again here. The Bucks have also been one of the NBA’s worst defensive teams, according to dunksandthrees.com. Milwaukee ranks 27th in the NBA in adjusted defensive efficiency with a 111.8 rating. That should give the Spurs a chance to at least keep this game close on the road here. Take San Antonio to cover the spread at the Fiserv Forum on Saturday evening.

Jakob Poeltl will be tasked with protecting the paint against Antetokounmpo and the Bucks on Saturday night. The Bucks shot the ball poorly from deep without Lopez and Holiday in the lineup versus the Timberwolves. Both players will be out once again in this game, which should open up some extra opportunities on the glass for Poeltl, who comes in averaging a career-high 11.2 rebounds per game this year. The 26-year-old center has compiled double-digit rebounds in three of his first five games and has played at least 30 minutes in four of those contests. With that kind of run, he should be able to notch another double-double in this game. Take Jakob Poeltl to record a double-double on Saturday night.

Jakob Poeltl to record a double-double +120

Take the San Antonio Spurs to win on the money line (+250) at Bovada.