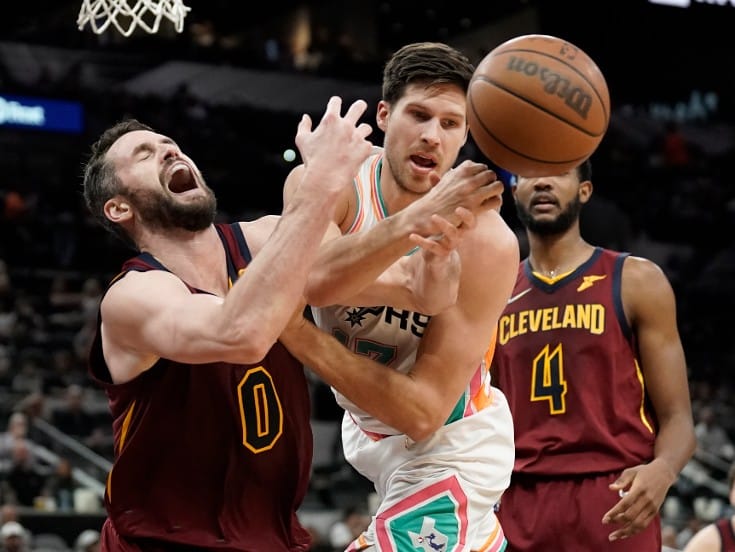 For tonight’s interconference rematch, the San Antonio Spurs (20-34, 28-26 ATS) are preparing to play the Cleveland Cavaliers (33-21, 33-19-2 ATS); NBA picks are posted here. Will the Cavs obtain their third consecutive win against the Spurs? Along with the starting lineups, our top NBA picks and betting trends are available below.

All Spurs vs Cavaliers betting odds can be found at BetOnline

Furthermore, on Friday, in the Spurs’ 131-106 home win over the Rockets, forward Keldon Johnson led his team in scoring with 28 points earned in 34 minutes played. Center Jakob Poeltl closed out his performance with another double-double. He had 21 points, 10 rebounds and 3.0 assists in 33 minutes spent on the court. San Antonio has won only four of its last 10 games. This win snapped their three-game losing streak. The Spurs are now 9-16 away, 11-18 at home and 14-11 ATS on the road.

Meanwhile, in the Cavaliers’ 98-85 home win against the Pacers on Sunday, Cedi Osman scored a team-high 22 points in 31 minutes played. Forward Kevin Love contributed 19 points, 7.0 rebounds and 5.0 assists in 32 minutes of action as well. Cleveland has won seven of its previous 10 contests. In addition to their two-game win streak, the team is 17-9 at home, 16-12 away and 17-9 ATS at home this season.

Referring to ESPN’s Basketball Power Index, the Cavaliers have a 60.6% chance of winning.

Pertaining to other head-to-head meetings, in the past three matchups, the Cavs are 2-1 versus the Spurs. On Jan. 14, 2022, the first time these teams met during this regular season, Cleveland won 114-109 at AT&T Center. The Spurs have not defeated them since Mar. 19, 2021, when they won 116-110 at Rocket Mortgage FieldHouse.

For the top news story, after the Cavaliers traded for Pacers’ guard Caris LeVert, head coach J.B. Bickerstaff became unsure of his starting lineup. At the moment, Darius Garland, Isaac Okoro, Cedi Osman, Evan Mobley and Jarrett Allen are the starters. When asked how he felt about joining the Cavs, LeVert said, “It’s an amazing opportunity.”

A source said as of early this evening #Cavs J.B. Bickerstaff was still deciding whether Caris LeVert would start or come off the bench. That doesn't matter. LeVert is here, where he feels he belongs after a whirlwind 14 months & ready to chase a titlehttps://t.co/rcNc4RGutS

Moreover, heading into Wednesday night’s contest, Cleveland is a seven-point favorite. For one notable observation, the Cavs are the superior team at home than the Spurs are on the road. In the minds of undecided risk-takers, the Cavaliers are in better shape. So, think about taking the Cavs to win, they will cover the spread and the total will go over 219. Be sure to check out our handicap betting guide, if you want to cover the basics of sports betting. Other NBA Picks are on the main page.