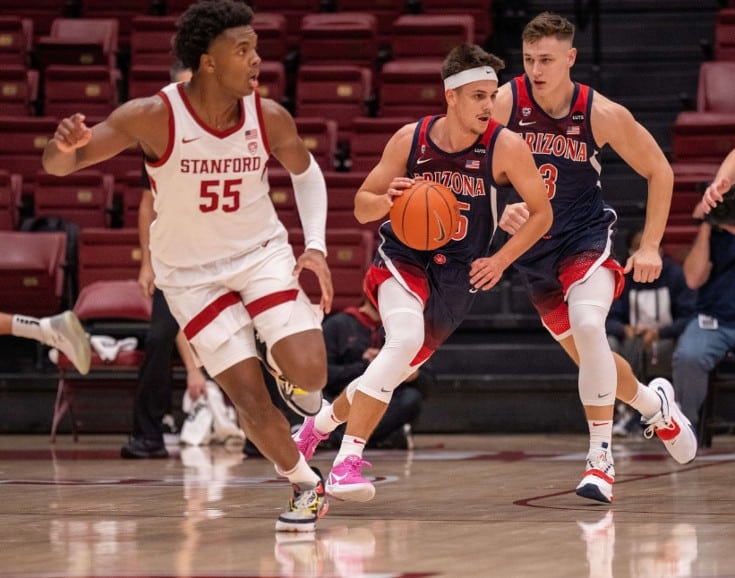 For Thursday night’s Pac-12 Conference rematch, the unranked Stanford Cardinal are playing the No. 2 Arizona Wildcats; NCAA picks are featured here. Stanford is shooting 42.89% from the field. Keep reading for Cardinal vs Wildcats preview content.

Will Bennedict Mathurin and the Wildcats obtain their second head-to-head win over the Cardinal this season? The sophomore guard is averaging 17.2 points per game this season. In addition to the starting lineups, our top NCAA picks and betting trends are available below.

All Stanford vs Arizona betting odds can be found at BetOnline

Leading into tonight’s Pac-12 Conference rematch, the Stanford Cardinal are aiming to snap their three-game losing streak. They have not won a game since defeating the Oregon State Beavers 76-65 on the road — played on Feb. 12. On Saturday, in the team’s 53-39 low-scoring road loss versus the California Golden Bears, forward Spencer Jones led Stanford in scoring with 10 points.

California outrebounded them 40 to 34. Including this defeat, Stanford has won just three of its past 10 games played. The Cardinal are 0-5 ATS in their last five contests played in the month of March. Also, the total has gone under in four of Stanford’s previous five games versus Pac-12 opponents. They are 3-7 away, 10-5 at home and 4-5-1 ATS on the road. NCAA picks are below.

Referencing ESPN’s Basketball Power Index, the Wildcats have a 97.7% chance of winning.

Furthermore, the Wildcats have won nine of their last 10 contests. Their only loss during this stretch was the team’s 79-63 road defeat against the Colorado Buffaloes. Arizona’s nine-game win streak came to an end. Counting their victory over the Trojans, the Wildcats are now 15-0 at home, 9-3 away and 7-7-1 ATS at home.

In the previous three head-to-head matchups, the Cardinal are 2-1 against the Wildcats. On Jan. 10, Arizona defeated them 85-57 on the road. Nonetheless, on the flip side, Stanford beat them 73-64 away on Jan. 28, 2021. Stanford vs Arizona picks are below.

The Wildcats have not lost a game at home this season. As long as they don’t play down to their competition, they should cover the spread on their home court. So, pick the Wildcats to win, they will cover the spread and the total will go under 146.5. For March Madness, feel free to check out our handicap betting guide. More NCAA picks are on the main page.