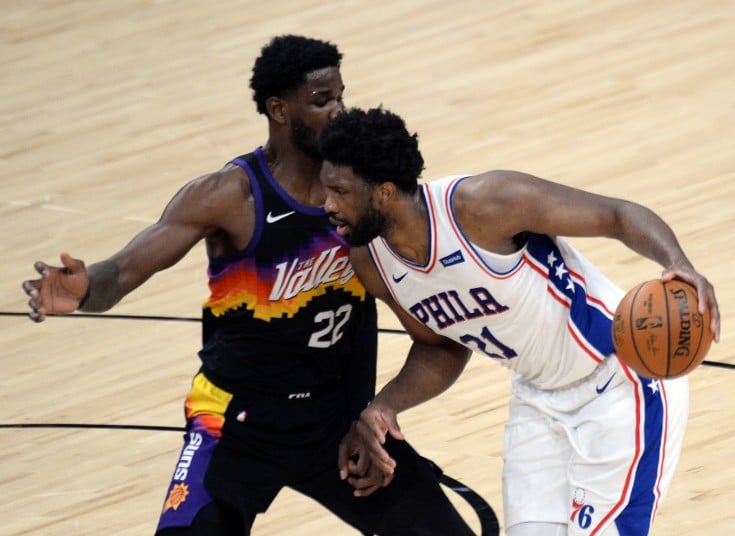 In tonight’s interconference rare encounter, the Phoenix Suns (43-10, 29-24 ATS) are playing the Philadelphia 76ers (32-21, 27-26 ATS); NBA picks are featured here. Will Joel Embiid and the Sixers earn their first win against the Suns since Jan. 2, 2019? Including the starting lineups, our top NBA picks and betting trends are posted below.

All Suns vs 76ers betting odds can be found at BetOnline

Additionally, on Monday, in the Suns’ 127-124 road win over the Bulls, guard Devin Booker led his team in scoring, putting up 38 points in 38 minutes played. Guard Chris Paul closed out his performance with another double-double. He amassed 19 points, 3.0 rebounds and 11 assists in 34 minutes of action. Phoenix has won nine of its last 10 games. After earning this victory, the Suns are 21-5 away, 22-5 at home and 16-10 ATS on the road this season.

Per ESPN’s Basketball Power Index, the 76ers have a 57.2% chance of winning.

On another topic, pertaining to the Ben Simmons situation, teammate Joel Embiid commented on the issue after being asked about it. He said, “The notion about guys getting called out and whatever, I just don’t see it that way. You look at the comments that were made — I didn’t call out anybody specifically out. I just called a bunch of events that happened.”

Embiid on the Simmons situation: “the notion about guys getting called out and whatever; i just don’t see it that way. You look at the comments that were made…i didn’t call out anybody specifically out, i just called a bunch of events that happened”

To add to the information above, leading into this contest, Phoenix is a one-point underdog. When not favored, the Suns have a .500 record. However, they have won their past four matchups against the 76ers. All things considered, contemplate picking the Suns to win, they will cover the spread and the total will go over 218.5. If you have never placed a bet, read our handicap betting guide. Other NBA Picks are on the main page.