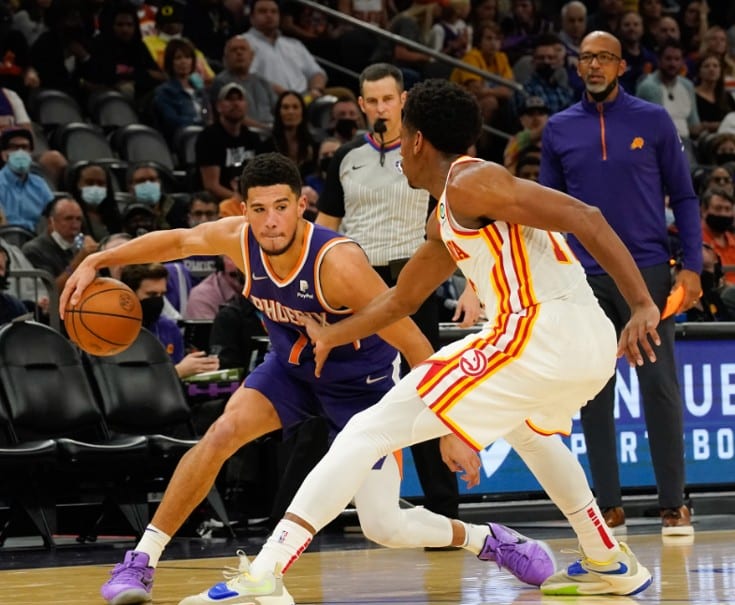 In tonight’s interconference rematch, the Phoenix Suns (41-9, 28-22 ATS) are playing the Atlanta Hawks (24-26, 22-28 ATS); NBA picks are available here. Will Devin Booker and the Suns extend their winning streak to 12 games? Including the starting lineups, our top NBA picks and betting trends are featured below.

All Suns vs Hawks betting odds can be found at BetOnline

Furthermore, in the Suns’ 121-111 home win over the Nets on Tuesday, guard Devin Booker led his team in scoring, putting up 35 points in 41 minutes played. Also, forward Mikal Bridges contributed 27 points, 8.0 rebounds and 4.0 assists in 40 minutes spent on the court. Phoenix has won its previous 11 consecutive games. They are the hottest team in the NBA. After defeating the Nets, the Suns are 19-4 away, 22-5 at home and 15-8 ATS on the road this season.

As for the Hawks, on Monday, in their 106-100 home loss versus the Raptors, guard Kevin Huerter scored a team-high 26 points in 39 minutes of action. Bogdan Bogdanovic closed out his performance with 18 points, 5.0 rebounds and 4.0 assists in 31 minutes played as well. Atlanta has won seven of its past 10 games, and this loss to the Raptors snapped their seven-game win streak. Now, the Hawks are 14-12 at home, 10-14 away and 13-13 ATS at home.

Referencing ESPN’s Basketball Power Index, the Suns have a 58.2% chance of winning.

In other news, Suns’ guard Landry Shamet did not travel with the team to Atlanta. Due to an ankle sprain, he is out for tonight’s game. In a total of 45 contests played this season, the fourth-year player has averaged 7.4 points, 1.9 rebounds and 1.6 assists per game.

Phoenix is entering this interconference matchup as a 5.5-point favorite. The Hawks have the healthier roster, but they have lost 12 games at home this season. Winning streaks come to an end eventually. However, the Suns’ streak will probably end against the Bulls or 76ers, not the Hawks. Taking everything into account, think about picking the Suns to win, the Hawks will cover the spread and the total will go under 225. To learn more about NBA betting, read our handicap betting guide. Other NBA Picks are on the main page.