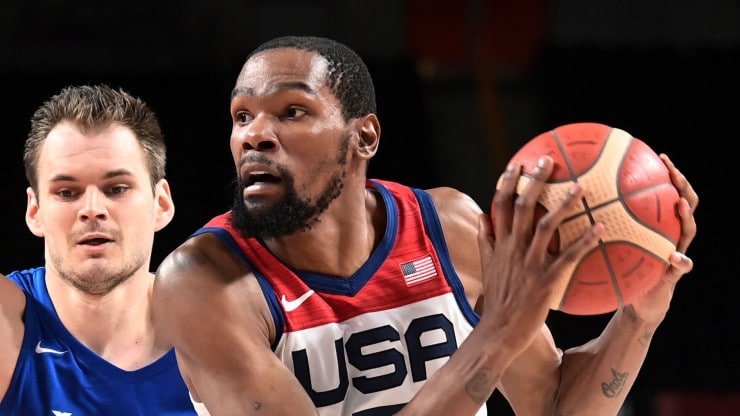 On Thursday, August 5, 2021 at 12:15 a.m. (EST), Team USA will have another competitive game against Australia in this semifinals matchup. In the exhibition game, Australia defeated Team USA 91-83. This was the first time USA lost back-to-back exhibition games since first fielding professional basketball players in 1992.

In the quarterfinals, USA defeated Spain 95-81 and Australia won 97-59 over Argentina. The winner of Thursday’s game will advance to the gold-medal final game, which is scheduled to air on Friday, August 6th at 10:30 p.m. (EST). The winning team will play either Slovenia or France. This semifinals game can be watched live via the NBC channel and through the network’s Peacock streaming service.

Leading into Thursday morning’s game, the projected starting lineup for Team USA consists of Jrue Holiday, Devin Booker, Damian Lillard, Kevin Durant and Bam Adebayo. In the team’s 95-81 victory over Spain, small forward Durant scored a team-high 29 points, along with earning two rebounds, four assists and three steels in 31 minutes played. Coming off the bench, Jayson Tatum once again shined on the stat sheet, ending his performance with 13 points, three rebounds, two assists and one steal in 18 minutes played. USA had to overcome a 10-point first-half deficit. Despite being out-rebounded 42 to 32, the Americans had 14 steals, which was a greater display of athleticism than the Spaniards’ three steals throughout the entirety of the match. According to Bovada, Team USA has -350 odds of winning the gold medal, ranking first overall.

As for Australia, their projected starting lineup is Patty Mills, Matthew Dellavedova, Joe Ingles, Nick Kay and Jock Landale. In the Aussies’ 97-59 blowout win over the Argentinians, with a total of 18 points, Spurs guard Mills led the team in scoring. He also ended his performance with two rebounds, four assists and one steal in 26 minutes played. Additionally, center Landale finished his game with 12 points, seven rebounds, five assists and three steals in 25 minutes played. Every single Aussie on the team scored at least one basket in that game, but they have to score more points in the first half if they hope to give Team USA a run for their money. Plus, they out-rebounded Argentina 44 to 36. Moreover, Australia has the fourth-best odds of winning the gold, showing +1000. Aside from the USA, they also trail France (+140 odds) and Slovenia (-135 odds).

Aside from Team USA losing to France 83-76, snapping their 25-game Olympic win streak, Australia could be the most challenging opponent the Americans have played against so far. Lillard and Booker have to step up their performances. Durant is a two-time NBA champion and two-time Finals MVP, and everyone knows this 32-year-old starter cannot carry this Olympic team on his own. Perhaps, head coach Gregg Popovich should consider moving Tatum to a starting role, if he has another decent showing. To add to the aforementioned observation, although the Aussies rank fourth in gold medal odds, trailing USA, Slovenia and France, they have reliable NBA play-makers. This is a team that is more than capable of getting hot at the right time.

The starting players that come to mind include former Cavaliers guard Matthew Dellavedova and current Jazz small forward/shooting guard Joe Ingles. Defensively, USA played poorly in the first half versus Spain, allowing 43 points. If the Aussies can find a way to contain Tatum and Durant, they could hang within 10 points of the Americans. One player Team Australia could have used in this matchup versus USA was Raptors center Aron Baynes. On July 30, it was reported that Baynes would have to bow out of the Olympics after suffering a neck injury. His injury was first reported on the court, and then he injured himself further after slipping in the bathroom.