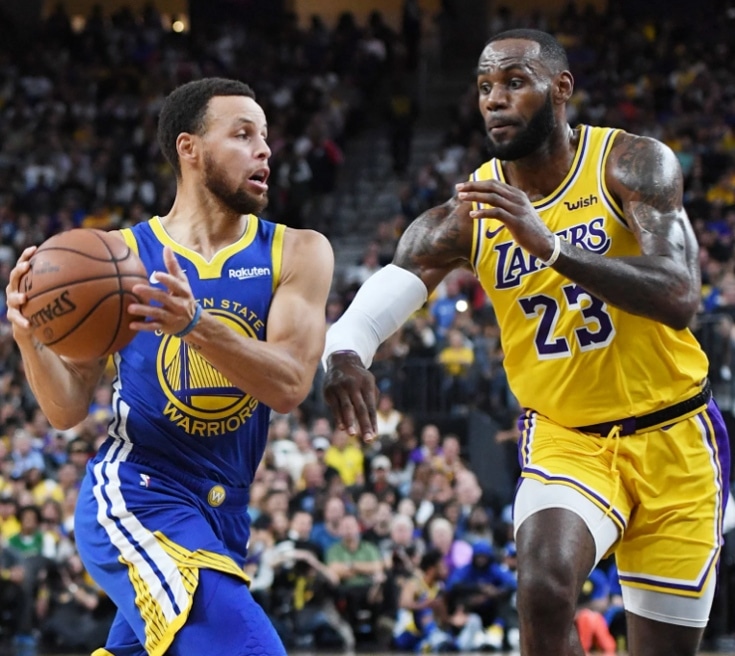 On Tuesday, Oct. 19, 2021, the Golden State Warriors are playing the Los Angeles Lakers at the Staples Center. This is the second regular season game of the 2021-22 NBA season, and it is also the second matchup of Tuesday’s doubleheader. BetOnline odds are available below.

Heading into Tuesday night’s regular season opener for the 2021-22 NBA season, the Lakers are 2-1 in their previous three head-to-head meetings. Nonetheless, this record does not include exhibition contests over these last few weeks. Last Tuesday, Golden State defeated Los Angeles 111-99. LeBron James, Anthony Davis and Russell Westbrook all played in that preseason matchup.

For Golden State, their top news story pertain to the organization waiving L.J. Figueroa and Axel Toupane. The roster move occurred on Saturday. Plus, after being waived by the Lakers, Joel Ayayi was claimed off waivers by the Wizards.

Joel Ayayi was reportedly claimed off waivers by the Wizards.https://t.co/KJSwRxwbE5 pic.twitter.com/S0k8A8BYoK

For the Warriors, shooting guard Klay Thompson and center James Wiseman are out against Los Angeles. Both players are out indefinitely. Thompson is still resting after undergoing surgery to repair his ACL in November 2020. According to ESPN reports, the target date for the guard’s return is Christmas Day.

Additionally, for the Lakers, Trevor Ariza and Talen Horton-Tucker are out indefinitely. Ariza is recovering from an ankle injury, while Horton-Tucker underwent surgery one week ago to repair the ulnar collateral ligament in his right thumb. He will miss at least the next four weeks.

The Warriors ended their preseason with a perfect 5-0 record. On Friday, in Golden State’s 119-97 blowout win over the Trail Blazers, guard Stephen Curry scored a team-high 41 points in 30 minutes played. Guard Jordan Poole accumulated 16 points, 3.0 rebounds and 1.0 assist in 30 minutes on the court as well. The team scored 43 points in the third quarter, while holding Portland to 26 points.

However, this exhibition performance demonstrated quantity, not quality. The Warriors shot 45-for-101 (44.6%) from the field and 16-for-46 (34.8%) from three-point range. They threw enough objects at the wall, hoping something would eventually stick. While the plan worked, Golden State has to play better against top Western Conference contenders.

Meanwhile, the Lakers finished their exhibition games with a winless record of 0-6. Preseason games are meaningless to so many fans, but not winning even one game is not exactly a confidence booster. Last Thursday, Los Angeles lost 116-112 on the road versus Sacramento. Forward LeBron James led his team in scoring, putting up 30 points in 29 minutes spent on the court.

Furthermore, the Warriors scored 119 points versus the Trail Blazers, whereas the Lakers generated 112 points against the Kings. This is a combined total of 231 points. The total for Tuesday night’s season opener is set at 228. Considering these Western Conference teams possess two of the top offenses in the league. But, this is the season opener. The fairest bet is taking the under. Some bettors are anticipating a slow start from the Lakers’ Big Three.

Pick the Lakers to win a close one at home; the total will go under 228. Of course, Golden State will cover the spread. Los Angeles is a 3.5-point favorite with BetOnline.