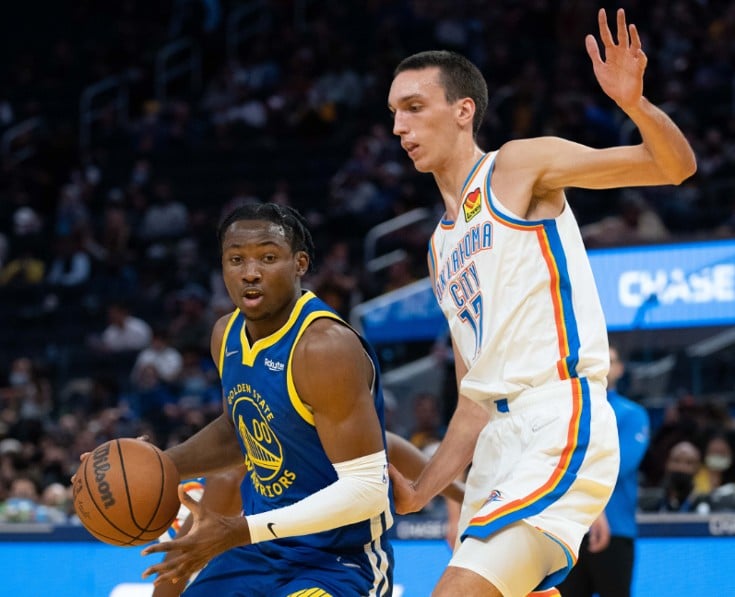 In tonight’s Western Conference mismatch, the Golden State Warriors (40-13, 29-21-3 ATS) are aiming to defeat the Oklahoma City Thunder (17-35, 32-18-2 ATS); NBA picks are available here. Will Stephen Curry and the Warriors extend their winning streak to nine games? In addition to the starting lineups, our top NBA picks and betting trends are featured below.

All Warriors vs Thunder betting odds can be found at BetOnline

Moreover, last Thursday, in the Warriors’ 126-114 home win over the Kings, guard Klay Thompson led his team in scoring, finishing his performance with 23 points in 24 minutes of action. Guard Stephen Curry ended his night with 20 points, 1.0 rebound and 7.0 assists in 32 minutes played. Golden State has won nine of its last 10 games. Along with their eight-game winning streak, the Warriors are now 15-9 away, 25-4 at home and 12-11-1 ATS on the road.

As for the Thunder, in their 113-103 road loss versus the Kings on Saturday, guard Josh Giddey scored a team-high 24 points in 38 minutes on the court. Forward Darius Bazley contributed 18 points, 7.0 rebounds and 1.0 assist in 37 minutes played. Charlotte has won just three of its past 10 contests. Counting this defeat, the team is 9-16 at home, 8-19 away and 15-8-2 ATS at home this season.

Per ESPN’s Basketball Power Index, the Warriors have a 80.7% chance of winning.

Referencing other head-to-head matchups, in the previous five meetings, the Warriors are a perfect 5-0 against the Thunder. On 30, 2021, the second meeting during this regular season, Golden State won 103-82 at Chase Center. The Thunder have not defeated them since Nov. 25, 2019, when they won 100-97 on the road.

On another topic, the Warriors have listed Otto Porter Jr. and Andre Iguodala as questionable for tonight’s game. Both players practiced on Saturday, so they’re slowly recovering. However, it is unclear on whether or not Porter Jr. and Iguodala will be 100 percent against the Thunder.

Otto Porter and Andre Iguodala both listed as questionable for the Warriors tomorrow in OKC.

Heading into Monday night’s rematch, Golden State is a heavy 12.5-point favorite. As stated above, the Thunder have not defeated the Warriors since Nov. 25, 2019. Oklahoma City would have had a better chance of winning with Shai Gilgeous-Alexander. Though, their leading scorer remains out. So, pick the Warriors to win, they will cover the spread and the total will go over 211.5. If you have never placed a bet, check out our handicap betting guide. Other NBA Picks are on the main page.