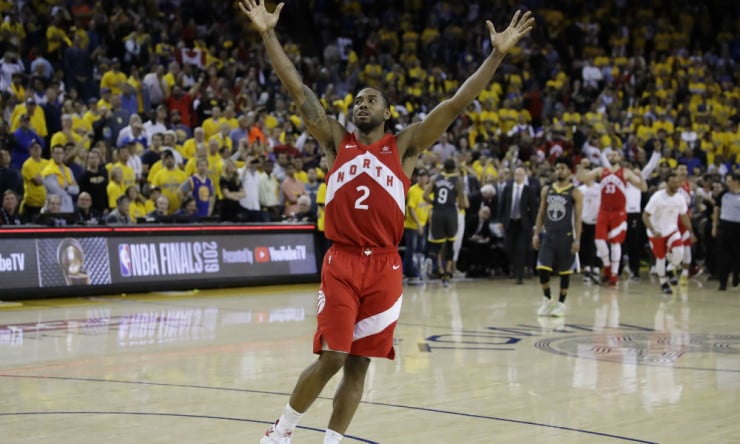 Even the most seasoned of newsmakers would have had some headaches to contend with in trying to come up with a headline for what transpired on Thursday 13th June, because the Toronto Raptors’ NBA title triumph owes its special status to so many different sub-plots. This, of course, is in addition to the fact that winning an NBA title is in itself a super-special achievement!

A First For Toronto and Canada As a Whole

The Toronto Raptors’ winning of their first NBA title in the team’s history makes this victory so special as it brings to light the fact that it is a Canadian-based NBA team which went on to cover itself in the ultimate American sporting glory. Sure, there’s a long list of firsts which we can rattle off, but this particular “first” is a super-special one in that the victors are Canada’s only team represented in the NBA. That means that if we go purely on the principles of mathematical statistics, the Raptors had a 1 in 30 chance of winning!

All we know is that it doesn’t do the Raptors’ victory any justice to simply report on it in the usual manner. A special victory of this nature deserves to be deconstructed and examined in a manner which mirrors its exceptionalism. Judging by how close the scores were in the finals series, it could very well be a long time yet until the Raptors will enjoy a chance of emulating this feat of going all the way to life the NBA title.

A Victory That Transcends Basketball

The headlines building up to the finals series, and the final game proper, would probably be enough to draw the attention of basketball fans of all kinds, from those who are perhaps just relatively knowledgeable about the sport and have a little more than just a passing interest, to the most hard-core of fans who follow the game religiously. It’s really just a case of Toronto pretty much doing the entire country proud, with Canadians taking pride in the multiculturalism of the most populous city in the vast country to the north of the American border. It was these multicultural people in Toronto and beyond who showed the world just one more way to come together, this time though in support of their sole representative in the most prestigious basketball competition.

Local newsmakers in Canada might have started to believe that there could very well come a time when they’d be able to write about their beloved Raptors actually going on to win the NBA title, but it’s probably safe to say that there was a stronger sense of “Well, they’ve come this far and that in itself is a more-than-commendable achievement,” prior to the comparatively young franchise even making the finals. By then though their record-breaking season had many Canadians starting to really believe, with some who don’t even have an interest in basketball and the NBA lending some of their newfound interest along with their support.

For those NBA fans whose love for the sport perhaps transcends their own team, dissecting a bit more of the technical info of the final game shines the light on yet another aspect which made this particular game so special. Fans witnessed the making of a different kind of history. Just as the growing power of the Raptors franchise was evident when they could acquire star forward Kawhi Leonard from the San Antonio Spurs in 2018, as a true fan of the NBA, you can take your pick from any number of the many technical nuances to enjoy.

For one, the 114-110 score mirrors the on-court action in its suggestion of how close it was in the end and just how much of a game of fine margins basketball is at this level, but considering that it took the sixth and final game of the finals to seal the victory, that makes it all the more sweeter (sweeter than maple syrup) and will have fans and commentators alike speaking about just how different things could’ve been at any time! At 3-2 up, leading the sixth, imagine if the Warriors had managed to clinch victory to effectively tie the series…

As close as things might have been between the two teams, the Raptors’ win appears to have aggravated some of the off-season uncertainty plaguing the Warriors, given how Kevin Durant and Klay Thompson among some of their other top players are set to become free agents. It’s all part of the game at what is the highest level though and the Raptors know all about braving periods of much heavier struggles to have to deal with in their comparatively short history.

We’re pretty sure nobody over in Toronto is losing any sleep at all over the fact that this would have been their opponents’ seventh title had they taken it instead!

Hey, if rapper Drake, who found his own fame south of the border, totally got on board in support of his hometown’s pro basketball franchise, it was all written in the stars, wasn’t it?

Kawhi Leonard Has The Last Laugh

Many fans and subsequent supporters of the Toronto Raptors and of the NBA as a whole were officially introduced to this high-octane scene through the quirky laugh associated with the level-headed forward, Kawhi Leonard. So the reference to his infectious laugh tells a story of just how special this title is from yet another interesting angle. The Californian, who was rumored to be eyeing a move to the Clippers in his home state, walked away an even bigger winner than all of his teammates, bagging the individual glory of being named finals MVP. This accolade was bestowed upon him for the second time in his career and there is no doubting the huge impact he played in “getting the Raptors to the final,” as per his own words when describing his mission since joining and helping them actually clinch the championship title.

A HUGE Win In Many Respects

The Eastern Conference of the NBA might be clutching at straws in doing so, but it can probably come in on the celebrations and enjoy the victory as one which represents the half that’s lagging behind in terms of NBA finals series titles wins and the All-Star games. US-Fans who use Online Sportsbooks and such platforms to effectively put their money where their mouths are, could perhaps even walk away as the biggest winners of all, having backed the underdog to go all the way and seal the NBA title, among other sporting codes which they bet on, of course. To compare the best US Sportsbooks you can go to https:/bettingalternative.link/.

Taking all the different ways in which people who have a vested interest in the NBA claim ownership of the Raptors’ victory, it becomes all too clear that this is a huge win in many respects and that’s ultimately what makes this victory of the Toronto Raptors against the Golden State Warriors so special.