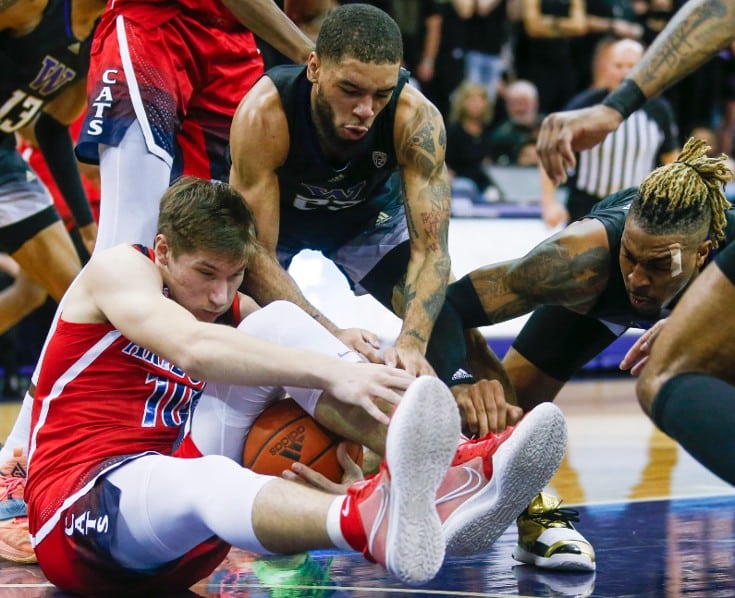 Will Justin Moore and the Wildcats obtain their sixth consecutive win? Along with the starting lineups, our top NCAA picks and betting trends are available below.

All Wildcats vs Huskies betting odds can be found at BetOnline

Moreover, on Saturday, in the No. 8 Villanova Wildcats’ 74-66 home win over the Georgetown Hoyas, guard Justin Moore ended his performance with 19 points in 35 minutes of action. Also, forward Brandon Slater contributed 11 points, 2.0 rebounds and 2.0 assists in 33 minutes played. In the first half, the Wildcats outscored them 32-22.

Not to mention, Villanova has won eight of its past 10 games. The team is currently on a five-game winning streak. Their last loss was on Feb. 2, when Marquette won 83-73. With this win against the Hoyas, Villanova is 9-4 away, 11-1 at home and 6-6-1 ATS on the road this season.

Referencing ESPN’s Basketball Power Index, the Wildcats have a 55.1% probability of winning.

On the other side, in the No. 21 Connecticut Huskies’ 72-61 home win versus the Xavier Musketeers, RJ Cole and Tyler Polley combined for 32 points. And forward Adama Sanogo closed out his effort with 15 points and 9.0 rebounds in 38 minutes played. The Huskies outscored the Musketeers 44-27 in the opening half.

Entering this matchup, the Wildcats have a 14-3 record in the Big East Conference. On the flip side, the Huskies’ intraconference record this season is 10-5. Based on this comparison, Villanova has played better against its rival opponents.

Additionally, the Huskies have won seven of their previous 10 contests. It should go without saying that Connecticut has also won its past three consecutive games. However, on Feb. 11, they lost 74-68 versus Xavier. Following the team’s recent win, they are 12-2 at home, 4-4 away and 7-7 ATS at home.

Nevertheless, a five-game win streak beats three straight victories. It cannot be reiterated enough that Connecticut has not won over Villanova since 2014. Each season is different, but if the Huskies couldn’t win against them earlier this month, how will they prevail tonight?

In brief, the Wildcats will win a close one, and they will cover the spread. The total will go over 137. If you need help learning the basics of basketball betting, read our handicap betting guide. Other NCAA picks are on the main page.