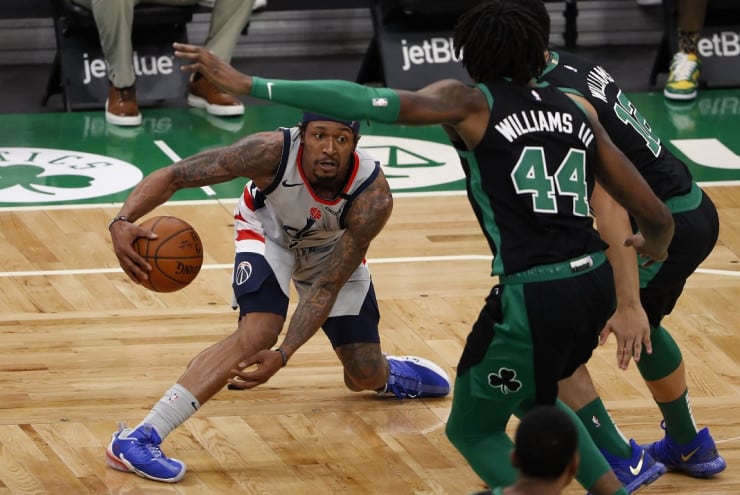 The Washington Wizards will head to TD Garden on Wednesday night for an Eastern Conference battle versus the Boston Celtics.

Washington enters with a 2-1 overall record but will be looking to bounce back from its first loss of the season. The Wizards opened their current two-game road trip with a loss versus the Brooklyn Nets on Monday. Meanwhile, the Celtics have put a 0-2 start behind them after winning back-to-back games, including an overtime thriller versus the Charlotte Hornets earlier this week.

Can Washington continue its fast start on the road in Boston against the Celtics on Wednesday night?

Washington is still awaiting the return of starting forward Rui Hachimura. Hachmiura missed the start of training camp for personal reasons after playing for the Japanese national team in the 2020 Tokyo Olympics. While Hachimura recently returned to the team and cleared healthy and safety protocols, he has yet to appear in a game this season and remains without a timetable for his return to the floor.

To the owner of @Nike, Phil Knight

How about I book plane tickets for us
and let's fly to China together.

We can try to visit these SLAVE labor
camps and you can see it with your
own eyes.@KingJames @Jumpman23
you guys are welcome to come too.#EndUyghurForcedLabor pic.twitter.com/241bg887JO

Boston Celtics center Enes Kanter recently made headlines for calling out Nike CEO Phil Knight to address forced labor in China. As shown in the tweet above, Kanter will raise awareness of the issue by wearing phrases on his sneakers during the NBA season.

Washington enters Wednesday’s contest with four players on the injured list. Only one of those players, Hachimura, is a regular member of the Wizards’ rotation. The Wizards’ forward has been cleared from health and safety protocols but the team is taking a slow approach to his return.

On the other hand, Boston comes into this game with just two players on the injury report. Center Al Horford is probable to play versus Washington after missing Monday’s win versus Charlotte. Swingman Romeo Langford also missed Monday’s game but is questionable to return against the Wizards.

After opening the season with back-to-back wins, the Wizards were unable to keep up with the Nets in a 104-90 loss in Brooklyn on Monday night. Bradley Beal finished with 19 points while Daniel Gafford added 13 in a losing effort for the Wizards, who shot an ugly 9-for-39 from 3-point range (23.1 percent) on the night.

Wizards’ point guard Spencer Dinwiddie appears to be fully recovered from the ACL tear that he suffered three games into the 2020-2021 season. After being acquired from the Nets during the offseason, Dinwiddie has picked up right where he left off after breaking out during the 2019-2020 campaign when he averaged 20.6 points and 6.8 assists per game.

SPENCER DINWIDDIE FORCES OVERTIME WITH A THREE MY GOODNESS?? pic.twitter.com/gxKqKHJXlu

In fact, it hasn’t taken Dinwiddie very long to make his presence felt in Washington. He opened his Wizards career by helping lead Washington to a blowout win over the Toronto Raptors with 13 points and six assists in limited action. Then, he nailed a game-tying 3-pointer at the end of regulation in a 135-134 OT-win versus the Indiana Pacers last weekend. Dinwiddie would finish the game with 34 points and nine assists on 6-of-9 shooting from 3-point range.

Through three contests, he is averaging 19.0 points, seven assists, and five rebounds per game while shooting 53.3 percent from 3-point range.

Jayson Tatum scored a season-high 41 points to lead the Boston Celtics to a much-needed 140-129 overtime win against the Charlotte Hornets on Monday. Jaylen Brown added 30 points and put the exclamation point on the Celtics’ win by putting Hornets’ star Miles Bridges on a poster with a monster dunk in the overtime frame. Dennis Shroder had 23 points and Robert Williams III had 12 points and 16 rebounds in the win.

Williams has been one of the breakout performers for the Celtics this season. With a slim 10 percent usage rate, the 24-year-old doesn’t command a lot of attention on the offensive end but he finds different ways to contribute and make a winning impact on the game. One of the most underrated high-energy players in the league, Williams has used his length and athleticism to change the game on the defensive end of the floor.

Through four games, Williams is averaging 9.8 points and 8.8 rebounds per game while adding 1.3 steals and a whopping three blocks per contest.

The Celtics expended a lot of energy in Monday’s overtime win against the Charlotte Hornets. Fresh off of an emotional game, Boston could be in a prime position for a letdown here. Washington has played better than expected to start the season, in large part due to the re-emergence of a healthy Spencer Dinwiddie. Montrezl Harrell, Kyle Kuzma, and Daniel Gafford combine to give the Wizards a formidable frontcourt as well. Take the Wizards to surprise the Celtics by covering the spread on the road on Wednesday night.

While he’s been getting roasted on social media this season, Wizards’ forwards Kyle Kuzma has also been hitting the glass with a renewed sense of urgency in Washington. In his first three games with his new team, Kuzma is averaging a whopping 13 boards per game and has had at least 11 rebounds in every game. That should leave some value on him getting a double-double against a Celtics team that ranks in the top half of the NBA in pace. Take Kyle Kuzma to record a double-double on Wednesday night.

Take the Washington Wizards to win on the money line at Bovada.