With a 16-9 record in his last 25 games, a Coach of the Month award for December on his mantle and a legitimate opportunity to get the Raptors to the playoffs for the first time in seven years, Dwane Casey could hardly be blamed for pestering the Toronto front office for a contract extension.

But, as a source told Sporting News, that hasn’t been the case—there have been, “no really significant discussions,” on extending Casey’s contract, which runs up at the end of this season.

Raptors, Magic aim to obtain No. 3 pick from Cavaliers in 2021 NBA Draft 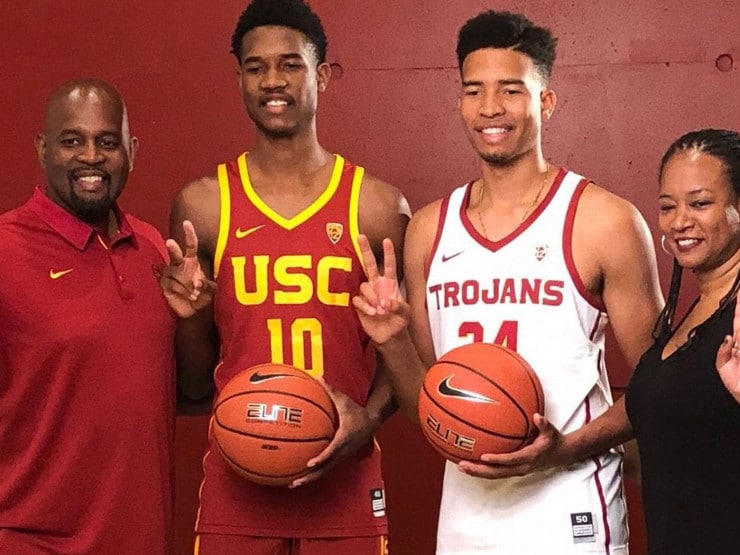 The 2021 NBA Draft is the 75th edition of the draft, and it is scheduled to take place next Thursday, July 29. According to numerous 2021 NBA mock drafts, the Cleveland Cavaliers are projected to draft Evan Mobley, the seven-foot tall forward/center and Pac-12 Player of the Year (2021) for the USC Trojans, with the third overall pick. Referencing NBA.com’s consensus mock drafts, there were six top players who appeared in all twelve of the mocks they surveyed: Cade Cunningham, Jalen Green, Evan Mobley, Jalen Suggs, Scottie Barnes, and Jonathan Kuminga. The Detroit Pistons are expected to take Cunningham with the first overall pick, followed by the Houston Rockets selecting Jalen Green with the second pick of the draft.

While the Toronto Raptors are currently set to pick fourth and the Orlando Magic are expected to pick fifth, per The Ringer’s Kevin O’Connor, both teams have made trade offers to the Cavs in order to move up to acquire the third spot. O’Connor stated, “League sources say the Cavaliers have received significant trade interest for this selection, and the Raptors and Magic Orlando—the next two teams up to pick—have made offers to move up. But Cleveland might just stay put.” Now, it is unknown what the Raptors and Magic are prepared to give up. Orlando has the advantage over Toronto, considering they also possess the No. 8 pick.

On Mar. 25, the Magic traded All-Star center Nikola Vucevic and forward Al-Farouq Aminu to the Chicago Bulls, in exchange for Wendell Carter Jr., Otto Porter Jr., and two first-round picks. The two first-round picks were for 2021 and 2023, first reported by ESPN’s Adrian Wojnarowski. This is why Orlando has extra leverage over Toronto. Some experts are speculating that Orlando will trade Mohamed Bamba, Gary Harris, and the fifth and eighth picks of the draft. To the fans, that right there sounds like a raw deal.

The Cavs aren't necessarily willing to trade down, but the Raptors and Magic have reportedly made offers for the No. 3 pick. 👀 pic.twitter.com/W7wfFy8ZXm

However, on the flip side, a team like the Raptors are in desperate need of a viable center. Last season, they finished 27-45 (.375), ranking 12th in the Eastern Conference. If not the Magic, the Raptors might be more than willing to give up the same, if not more. Toronto could trade Pascal Siakam and the No. 4 pick. In the previous offseason, a few of the notable departures for the Raptors were Marc Gasol and Serge Ibaka.

Both of these aforementioned players played important roles in helping the Raptors to win their first NBA championship in the 2018-19 season. Though, the Raptors would have to make it a top priority to re-sign Kyle Lowry as well. On Oct. 7, 2019, Lowry signed a one-year, $31 million contract with the organization.

Not to mention, the Magic already have Mohamed Bamba, Wendell Carter Jr., and Johnathan Isaac on their roster. Furthermore, after recovering from their injuries, Isaac and Markelle Fultz will be returning to the court this season. Maybe Magic general manager John Hammond is using a trial-and-error approach, hoping to keep the most talented, best center available on the roster. If one throws enough sludge at the wall, eventually something will stick.

Leading up to the draft, basketball enthusiasts can continue to speculate and ask questions, but none of these potential draft moves are carved in stone. The transactions will not occur until the night of the draft, so one person’s educated guess is as good as anyone’s right now. All too often, teams get fleeced every year during the draft because various coaches and general managers either underrate or overestimate a player’s value. 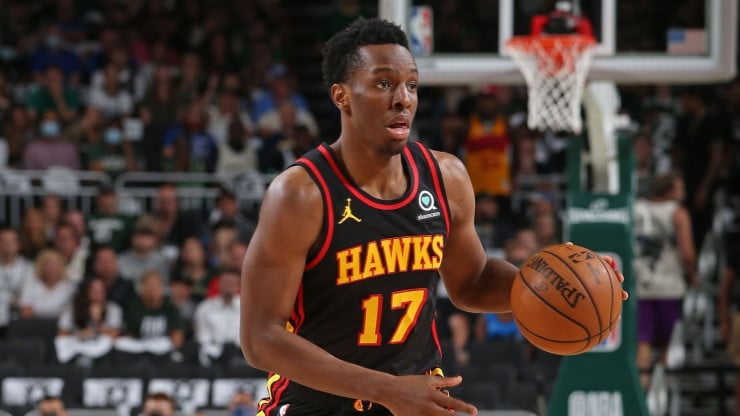 After Atlanta Hawks‘ Onyeka Okongwu underwent surgery to repair a torn labrum in his right shoulder on Wednesday night, the 20-year-old center will take the next six months off. Okongwu is a 6’8″ two-time California Mr. Basketball (2018, 2019), selected sixth overall in the 2020 NBA Draft. After agreeing to a rookie contract, Atlanta signed him to their roster on November 24, 2020, and he made his NBA debut on January 15, 2021. The signed multi-year contract was worth a guaranteed $11.9 million over the course of two seasons.

According to a report first published by ESPN’s Adrian Wojnarowski, Dr. Neal ElAttrache operated on Okongwu in Los Angeles, California, and he suffered this shoulder injury earlier in May. He will likely be eligible to play as early as late February 2022. While the typical recovery time for a torn labrum after surgery is between three to six months, labral tears can negatively impact athletes in a sport like basketball, if they are not careful. It will not recover by itself without the proper care.

Yesterday, the Hawks organization released a statement: “Onyeka Okongwu underwent surgery earlier tonight in Los Angeles to repair a torn labrum in his right shoulder. Dr. Neal ElAtrrache of Kerlan-Jobe Orthopaedic Clinic performed the surgery. Okongwu will now enter a period of rest and rehabilitation and is expected to make a full recovery in approximately six months.”

In the 2020-21 NBA season, in 50 games played, he averaged 4.6 points and 3.3 rebounds. Over the course of the 2021 postseason, Okongwu played a total of 166 minutes, averaging 9.2 minutes played per game, in eighteen games for the Hawks. He scored five points in the first round series versus the New York Knicks, 19 points in the conference semifinals versus the Philadelphia 76ers, and 24 points in the Eastern Conference Finals series against the Milwaukee Bucks.

In his junior and senior seasons playing for the University of Southern California Trojans, he earned those aforementioned California Mr. Basketball awards. In 28 games played in college, he averaged 16.2 points, 8.6 total rebounds, and 1.1 assists per game. His average field goal shooting percentage in college was also 61.6 percent. He will be turning 21-years-old this December.

Moreover, the upcoming free agency will begin on Aug. 1, 2021 and the regular season is scheduled to start on Oct. 19, 2021. For betting purposes, the 2022 NBA Finals will air throughout June 2022. The NBA has transitioned its schedule back to normal format. The league office anticipates that future playoff series will no longer get pushed back to the months of June and July. Similar to everything else, however, this current schedule is subject to change due to the ongoing COVID-19 pandemic. 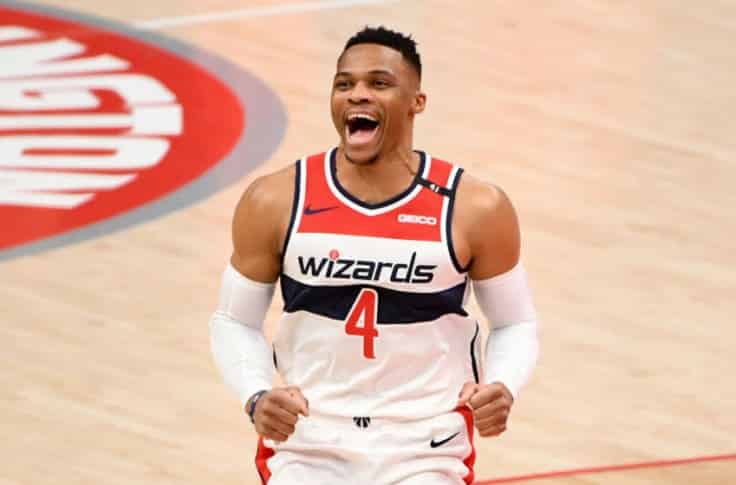 The 2020-21 Los Angeles Lakers concluded the season with a record of 42-30 (.583), losing in the first round of the playoffs against the Phoenix Suns. Injuries sustained developed quite a toll on the roster and morale, such as Anthony Davis’ strained calf and groin. This was a more disappointing, forgettable season for Lakers fans. Now, rumors are circulating across the Internet that the Los Angeles Lakers will trade for the Washington Wizard’s Russell Westbrook. Back in June, LeBron James and Anthony Davis followed Russell Westbrook’s wife on Instagram. This could mean anything, though. Westbrook is set to be owed $44.2 million for the 2021-22 NBA season. The nine-time NBA All-Star turns 33-years-old this November.

According to Bleacher Report, a potential swap regarding a Russell Westbrook sign-and-trade for Kyle Kuzma, Dennis Schroder, and Talen Horton-Tucker was discussed between the Lakers and Wizards. Marc J. Spears of The Undefeated stated, “There have also been talks about Washington Wizards star Russell Westbrook being a potential candidate to move back home to Los Angeles in a sign-and-trade deal that could include free agent point guard Dennis Schroder, forward Kyle Kuzma, and guard Talen Horton-Tucker, sources said.”

But, this deal can only occur if Schroder and Horton-Tucker approved the trade via sign-and-trading. So, there are existent extenuating circumstances. Moreover, Suns’ guard Chris Paul was also mentioned on the Lakers’ offseason target list. Paul’s base salary, cap hit, and deal cap value is $44.2 for the 2021-22 NBA season. Needless to say, the organization will have to pick one player to pursue.

Lakers are seeking a vet PG, and Chris Paul is on their list, per @MarcJSpears

The detailed terms of this possible agreement are not yet known to the public, considering Los Angeles and Washington could just be spitballing ideas internally. However, this should raise the important question: are the Lakers giving away too much and would this trade suffice? While trading for Westbrook might not improve the Lakers’ perimeter shooting accuracy, the team could use more bulldozing power and intensity to bring the ball to the rim.

Placing injuries aside, it would ultimately make their offense faster, giving them extra speed to pass and drive the ball to the basket versus their opponents. The Los Angeles Lakers won their seventeenth championship in the 2019-20 season, and their bench player performances made that possible. One notable player departure that offseason was Rajon Rondo.

Plus, it is unknown if Westbrook can play more team-oriented basketball with James and Davis. It could create a nasty situation where the star players try to outdo one another on both sides of the court. This type of play can create a more competitive atmosphere for struggling teams, but a 36-year-old LeBron James is in a must-win-now mode at this point of his NBA career. He wouldn’t want to play alongside another player who is too accustomed to playing isolation ball and giving everyone else orders on offense.

Having said this, factoring in Westbrook’s ability to assist and acquire rebounds, the Lakers need his talent right now. Would he be wiling to change his style of play in order to win a ring? This remains to be seen. In 65 games played for the Wizards in the 2020-21 season, Westbrook averaged 22.2 points, 11.5 rebounds, and 11.7 assists per game. If he could assist players like LeBron James and Anthony Davis without negatively altering the team’s chemistry, this is a reasonable plan the Lakers need to pursue.