George Hill is making history with the Utah Jazz.

Hill became the first Jazz player to win Western Conference Player of the Week since Al Jefferson on April 1, 2013. Hill led Utah to a 3-1 record from October 31 through November 6 while averaging 20.8 points on 59 percent shooting, 5.8 assists and 3.3 rebounds.

“I’m given a great opportunity,” Hill told Basketball Insiders. “I feel like here, other than Indiana, I got the ball in my hands a lot more. I have the coach’s green light to be aggressive and take shots. Not saying I didn’t have the green light in Indy, so no disrespect to the coach there, but it’s a little different. When I have the ball in my hands a lot more, I’m not in the corner a lot, just taking advantage of the opportunity that’s given to me. I think that’s what you do, you try to take advantage of the opportunities.”

Will those opportunities remain abundant? Gordon Hayward made his season debut against the New York Knicks on November 6 and will return to his role as the focal point of the offense.

“I feel like (Hayward’s return) just makes us a lot better as a team where you have another guy that you can count on, on the offensive end and the defensive end,” Hill said. “We take a little pressure off each other so it doesn’t affect anybody. We’re going to continue to move the ball and share it, and play with the same intensity that we’ve been playing with.” 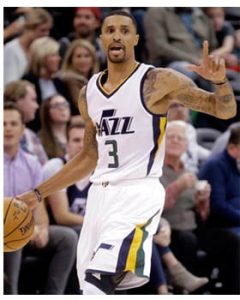 Utah will need Hill to remain aggressive despite Hayward’s return to the lineup. Utah is 4-0 when Hill scores 20 or more points in a game. Hill is shooting a career-best 54 percent from the field, 43 percent from beyond the arc and 88 percent at the foul line.

Utah appears primed for a return to the playoffs for the first time since 2012 with Hill playing the best basketball of his career, Hayward returning from a broken left finger and Derrick Favors rounding into form after returning from a knee injury.

“Only focus we have is the playoffs, anything less is a bad season for us,” Hill replied. “That’s our goal, to bring playoff basketball back to Utah, the city of Salt Lake, and have our fans there every night for them. Playoff games, just like [the fans] deserve.”

While Utah’s immediate goal is to make the playoffs for the first time since 2012, this offseason will determine if Utah remains a playoff contender for the foreseeable future.

Hayward is expected to opt out of his $16.7 million player option and become an unrestricted free agent this summer. Hill is in the final year of his contract worth $8 million and will also become an unrestricted free agent. While Utah has a well-regarded young nucleus that should only get better – especially after locking up Rudy Gobert to a long-term extension – Hill isn’t looking toward his future yet.

“I don’t know,” Hill said. “I’m really not here to answer [questions about] extension or contract situations and things like that. I’m going to let Dennis Lindsey and the front office handle that and my agents. My focus is just to play basketball and try to get us to the playoffs.”

Hill has come a long way after spending his first four seasons primarily coming off the bench for the San Antonio Spurs and Indiana Pacers. No one recognizes that more than Quin Snyder, his current head coach in Utah. Snyder and Hill were both part of San Antonio from 2008-10.

Hill holds the cards in his hand when it comes to his future. If Hill and Hayward re-sign, Utah is primed to be a playoff contender for the foreseeable future thanks to its young nucleus. If Hill leaves in free agency, Utah will have to reshuffle the point guard deck.

Related Topics:FeaturedUtah Jazz
Up Next

Should the Knicks Stagger Porzingis’ Minutes?

VIDEO: Next Star to Leave His Team?