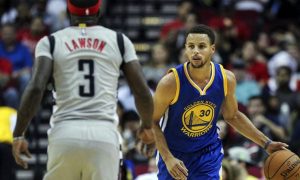 The 2015-16 Golden State Warriors are now the greatest 3-point shooting team in NBA history. In the fourth quarter of Friday’s game against the Mavericks, the Warriors hit their 934th 3-pointer on the season. Klay Thompson drained a 3-pointer from the top of the key, giving the Warriors a 105-94 lead.