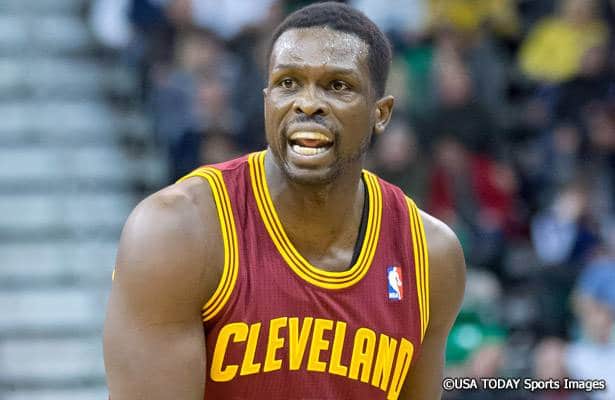 Only a couple of months after acquiring forward Luol Deng from the Chicago Bulls, the Cleveland Cavaliers already are reportedly shopping him again. It’s no mystery as to why. Afraid they will lose him for nothing in free agency this summer, the Cavs are interested to see if they can recoup some assets before the deadline.

But because Deng was acquired fewer than two months ago, he cannot be packaged with another player on the Cleveland roster to make salaries match. This limits Cleveland’s options, but here are a few potential landing spots for Deng should the Cavaliers find themselves able to make a trade involving the two-time All-Star small forward:

1. Phoenix Suns – The draft pick that Chicago originally used to select Deng seventh overall in 2004 actually came from the Suns, so in a way it would be rather poetic for him to return there a decade later. The Suns have played out of their minds this year and have plenty of options at their disposal in terms of putting together a reasonable offer. Emeka Okafor’s expiring deal would match the salaries, and a couple of picks could serve as payment for Cleveland handing over a talented veteran leader that could really help with a playoff push. With Eric Bledsoe looking like he’ll back this season and the rest of the team playing so well, Deng would be a great fit for the Suns, who do still need a starting small forward.

2. Dallas Mavericks – The Mavericks are going to have quite a bit of cap room to play with this offseason, so they were one of the teams expected to make a run at Deng anyway. Why not trade off some of those expiring contracts early (along with a young asset or draft pick) to ensure that they have the best shot at retaining him long-term? There’s really no player in that lineup right now that would hinder Deng’s minutes, and he’d be a great acquisition for a playoff push. Considering they are the eighth seed in the West right now with Memphis gaining ground, they could certainly use Deng’s help.

3. New Orleans Pelicans – It’s not particularly likely since Cleveland probably wouldn’t be interested in taking on the big long-term money at a position they already have filled, but it’s worth nothing that Deng’s contract and Eric Gordon’s contract are about $8,000 away from being exactly the same. New Orleans still needs a small forward, and having a potent scorer like Gordon for two-and-a-half seasons definitely looks better for the Cavs than Deng walking away with zero restitution this offseason.

4. Charlotte Bobcats – It really does seem like the Bobcats are more interested in adding veteran talent this deadline than trading it away, and Deng would absolutely give them an upgrade at the three if they were able to acquire him. Charlotte could package Ben Gordon’s expiring contract with Michael Kidd-Gilchrist to bring in Deng, but with little certainty that Deng would stay long-term, trading the former No. 2 overall pick might seem like a steep price. Despite that, there aren’t many years in which Charlotte has a shot at the playoffs, and this is one of them. Essentially swapping out Deng for Kidd-Gilchrist would absolutely make them a better team for the stretch run.

5. Portland Trail Blazers – It wouldn’t be an easy trade to pull off because it would essentially require that Portland send Wes Matthews back to Cleveland (along with another player or two to make salaries match), but if Cleveland thought adding Deng’s defense and leadership would give them a better shot at a championship than Matthews’ offense, it’s certainly easy to see this working out for them. Cleveland could get back some nice young talent (especially if someone like Thomas Robinson was the other player included in the deal), while Portland would show how serious they are about competing for a championship this year. It could screw with the team’s great chemistry, but it’s an intriguing idea, to say the least.

Finding a taker for Deng, who could potentially be just a two-month rental, could prove challenging for the Cavaliers, as teams aren’t just handing away assets on a hope and a prayer these days. Still, there are some options that exist for them, and the five listed above feel like the most realistic of those options.