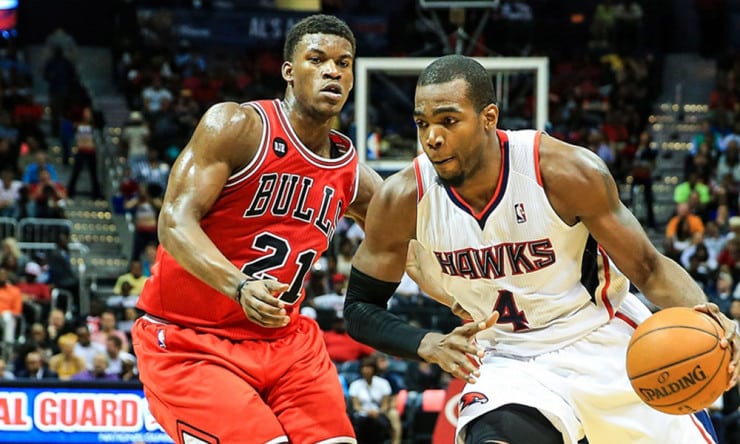 Back in September, after LeBron James had begun his quest in Cleveland and Derrick Rose reintroduced himself to the Chicago Bulls, the Eastern Conference was sure to be a two-horse race between their teams.

Some, perhaps, believed that the upstart Washington Wizards would have an opportunity to make some noise in the conference while others believed that the Toronto Raptors and their continuity would see the Canadian franchise continue to ascend the ranks out East.

But it is the Atlanta Hawks who have soared.

And as the mid-February All-Star break approaches, it is perhaps one of the NBA’s most underrated players who has flown with the Hawks, even if under the radar.

Officially listed at 6’8, anyone who has been in the same room with Paul Millsap knows the listing is liberal, to say the least. Yielding size to opposing forwards on a nightly basis, Millsap is never outworked and rarely unprepared. A consummate professional, over the duration of his nine-year career, he has earned the reputation of being nothing more than a hard worker and astute student.

Cleveland Cavaliers general manager David Griffin spoke with the media today and wanted to clear the air on a number of topics, including the on-going rumors of discord with his team and his coaching staff. He insisted that head coach David Blatt isn’t on the hot seat.

‘This narrative of our coaching situation is truly ridiculous,” Griffin said. “It is a non-story. It’s a non-narrative. Coach Blatt is our coach. He’s going to remain our coach. Do not write that as a vote of confidence. He never needed one. It was never a question. So don’t write it that way.”

Griffin said he spent a lot of time listening to the raw interview files recently from forward LeBron James where some have used his comment to make it seem as though there was doubt.

As we move forward into the New Year, we draw one step closer to what appears to be another very active trade season. Forty-six days, that’s exactly how much time teams have between now and the Feb. 19 NBA trade deadline. It’s a time when every general manager in the league takes an honest assessment of their team and makes the decision on whether they should pull the trigger on a deal that could potentially help them. How a team is faring, their cap situation, looming contract extensions or positional logjams are just a few of the reasons why a team may look to make a trade. We’ve already seen one big domino fall with the Rajon Rondo trade that sent him packing from Beantown to Dallas as he joins a Mavericks team that is sure to be a contender in the Western Conference. Let’s take a look at a few other names to keep an eye on as the trade season gets underway.

Milwaukee Bucks center Larry Sanders is in an enviable position that hundreds of millions of basketball players around the world would do anything to be in. Yet, according to Gery Woefel of the Racine Journal Times, he wants out of it.

The former 15th overall pick in the 2010 NBA Draft is in the first year of a four-year contract that will pay him a guaranteed $44 million. He was given a clean slate this offseason when the Bucks were taken over by new ownership and coaching staff, who promised him none of his past discretions would be held against him in hopes that it would help him bounce back after the worst year of his career.

While not quite the Sanders who put up 9.8 points, 9.5 rebounds and 2.8 blocks a game in 2012-13, he was a sizeable contributor to the Bucks’ surprising success this season. Sanders was averaging a respectable 7.3 points, 6.1 rebounds and 1.4 blocks per game. It wasn’t the best-case scenario the Bucks could have dreamt up, but it was a significant improvement over last year’s debacle, which was low-lighted by a failed drug test for marijuana, a videotaped fight at a nightclub that went viral and a broken orbital bone that ended his season prematurely.

Slowly, Sanders seemed to be getting back on track.

The D-League is quickly proving to be a legitimate avenue for prospects with more and more players getting called up. Last season, a total of 37 players earned an opportunity to play in the NBA on a record 49 call-ups. Players like Chris Douglas-Roberts, Kendall Marshall, Shawne Williams and Dewayne Dedmon all earned call-ups last season and are currently still playing on NBA rosters.

With the window now open for teams to start signing players to 10-day contracts, here are 10 prospects (in no particular order) that could earn a call-up.

In terms of trade activity, 2015 kicked off with a resounding bang as the Cleveland Cavaliers, New York Knicks and Oklahoma City Thunder completed a three-way deal that contained a decent mix of overall talent.

With just over a month remaining before this season’s trade deadline (February 19) you can expect more trade activity, or at the very least plenty of rumblings, dominating the headlines.

Here are some of the names and situations to keep a close eye on as we approach the trade deadline:

Last month, the Boston Celtics traded Rajon Rondo to the Dallas Mavericks. Rondo was the last remaining piece of the Celtics’ 2008 championship team. As we move closer to the NBA trade deadline, the consensus belief is that Celtics general manager Danny Ainge will look for the best deals possible for Jeff Green and a few other veteran players.

At 6’9, 235 pounds, Green is a tweener. On offense, he is most effective playing as a small-ball four, but is often times over-sized on the defensive end by opposing power forwards. While Green can stretch the floor as a small-ball four with his shooting (career 34.1 percent from three-point range), his 7.3 percent rebound rate is very low for a power forward (just 4.7 rebounds per 36 minutes this season), which is problematic.

Players Who May Be Traded – Part 2

The calendar has changed to 2015, which means there’s only a month and a half until the Feb. 19 NBA trade deadline. Which players may be traded between now and then?

Yesterday, I revealed part one of my list of players to watch (which included Denver’s Timofey Mozgov, who is on the verge of being dealt to Cleveland). Here is part two:

As NBA teams continue to expand their international personnel on the bench and the hardwood, Lithuanian small forward Mindaugas Kuzminskas keeps falling between the cracks. However, he hasn’t fallen off the radar.

Let’s rewind back to 2011. On his third outing at the Adidas EuroCamp showcase, Kuzminskas, according to a report from scouting guru Jonathan Givony of DraftExpress, showed the ability to score in bunches.

The slim-framed, 6-foot-9 wing erupted with 32 points on 6-for-10 shooting from the perimeter over a pair of showings, drawing immediate NBA attention.

Shirt Off His Back: Dieng Shares Inspiration for Donating

Gorgui Dieng happily doled out most of his clothing among his friends before he moved from Senegal. Take a shirt, have some pants. There will be plenty for me to wear when I get to the United States, he thought.

Dieng left his home country as a teenager to embark on a trip that would bring him to Huntington Prep School in West Virginia to pursue his basketball career. A long journey across the ocean and an unexpected realization once he arrived impacted how he views his role as an NBA player today.

Growing up, Dieng attended the SEEDS (Sports for Education and Economic Development) Academy. Ranked as one of the best players in Africa, he shined during a Basketball Without Borders clinic. Dieng turned heads and decided to chase his basketball dreams at Huntington in 2009.

Memphis a Frontrunner to Land Green?

This afternoon, Marc Stein of ESPN reported that the Memphis Grizzlies and Boston Celtics are having discussions about a Jeff Green deal and that the talks are “heating up.” Nothing is imminent, but the report suggests that the Grizzlies are serious in their pursuit of the veteran forward.

Memphis is one of the more intriguing suitors for Green, and this is definitely a situation worth watching. Some reports have indicated that the framework of the deal would be Tayshaun Prince’s expiring contract and a draft pick for Green. The Grizzlies have traded their own draft picks for this year and only own the less valuable of the Toronto Raptors and and Dallas Mavericks’ second-round picks. They can trade a future first- or second-round pick, though.

This comes just one day after Stein reported that the Grizzlies want to add a veteran small forward, with Miami HEAT forward Luol Deng being mentioned as a possible option in addition to Green.

While as much as a third of the league is competing for a playoff spot and the chance to fight for this year’s crown, there are also 10 (or so) teams jockeying for position in the 2015 NBA Lottery. These days, this battle for ping pong balls sometimes seems just as competitive as the fight for playoff seeding.

It should absolutely be noted that players, by-and-large, are against the mere notion of embracing the tank. They’re playing to keep their job and earn the most money they can during their short playing career. But it is important to remember that while the players are competitors and take a great deal of pride in their craft, that doesn’t mean various front offices are not strategically, if not openly, positioning themselves for a more favorable pick come June.

We should also mention the fact that several teams seem to have adopted the “play for next year” mantra along the way, at least in part due to how ridiculously competitive the Western Conference playoff race is shaping up to be. At a certain point, it makes a great deal of sense to weigh the odds and turn attention to making potentially significant improvements to the roster rather than continuing to compete while sitting outside of the playoff picture. Here are our current rankings of the “tanking” teams as we head into the throes of the mid-season grind:

Cleveland Had To Deal, But It Will Cost Dan Gilbert

Shortly after the Cleveland Cavaliers extended Anderson Varejao in October, I looked at how the Cavaliers got to this point and concluded that it would be difficult to add to the team without swallowing a large tax bill. With the recent acquisitions of Timofey Mozgov, Iman Shumpert and J.R. Smith for far less outgoing salary, the Cavs have doubled down.

ESPN’s Brian Windhorst did a nice job detailing the cap machinations that enabled these acquisitions. The Cavaliers used the trade exception they got from trading Keith Bogans to the Boston Celtics to acquire Mozgov. Per Windhorst, the Cavs’ justification for exchanging the non-guaranteed Bogans for a trade exception rather than keeping him was that they didn’t want to pay him for this year and that they were worried they would potentially have to guarantee his salary by the January guarantee date if they could not move him. For reasons I explained back in November, giving up Bogans cost the Cavs’ flexibility, and also came at the cost of two second-round picks.