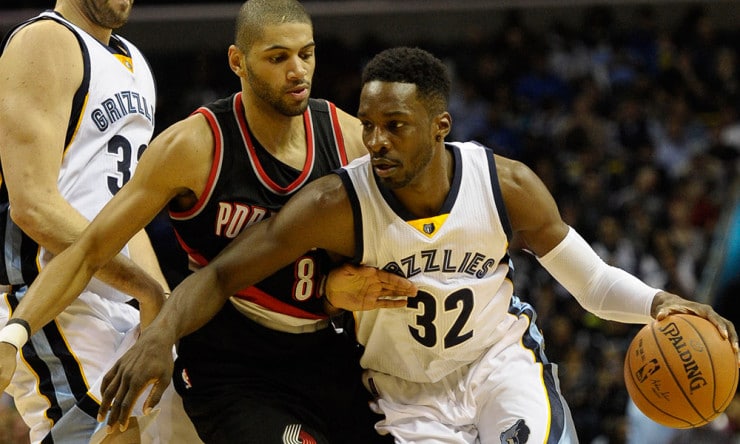 Al-Farouq Aminu bent his knees and exploded skyward after summoning all the strength his 17-year-old legs could muster. He corralled one of his four rebounds on the day in what began as a routine-enough play and instinctively spun around, looking for a teammate to pass the ball off to.

Instead, Aminu saw his smallest teammate—some kid hailing from New York City’s Soundview Projects in the Bronx—already sprinting down toward the other end of the floor.

Aminu channeled his inner Peyton Manning and lofted a perfect pass to the streaking guard who received it at half court, in-stride.

Less than four seconds later, on March 26, 2008, at the McDonald’s All-American game, the world learned exactly who Kemba Walker was.

Jeff Green has only been with the Memphis Grizzlies for a total of three games now, but he is already showing what he can add to an already stacked team. In just his second game since being acquired by the Grizzlies, Green led the team in scoring with 21 points in 31 minutes off of the bench in a win over the Orlando Magic on Friday night.

The Grizzlies enter Sunday with the fourth-best record in the Western Conference at 29-11 and are coming off of a big win against the Portland Trail Blazers. With proven players in Marc Gasol, Zach Randolph and Mike Conley already making up the team’s core, the Grizzlies recognized that adding a player like Green could be the final piece that puts them over the top in the competitive West.

Is Waiters The Thunder’s Missing Piece?

Dion Waiters, the Oklahoma City Thunder’s new addition, doesn’t seem like someone who has been with the team for just 14 days, especially after the team’s 127-99 blowout win against the Orlando Magic Sunday night. His back-and-forth banter with star guard Russell Westbrook sounded more like teammates who had known each other for years. Waiters bashed on Westbrook’s well-chronicled love for the Dallas Cowboys, while Westbrook returned jabs about Waiters’ love for the Philadelphia Eagles; just two teammates ribbing each other over football.

The quick assimilation of Waiters into the Thunder’s program and culture was the plan from the day they obtained him as part of a three-team deal that sent out two future protected draft picks (a 2015 first-rounder and a 2019 second-rounder) along with Lance Thomas.

Waiters has logged five games for the Thunder since the trade and is averaging 14.3 points on 42.1 percent shooting from the field and 33 percent from three-point range. His 77.8 percent from the field last night helped pad his averages, but what’s starting to surface for Waiters is that he has an unlimited green light from his teammates. He’s feeling the love that Thunder star and leader Kevin Durant promised the team would provide when news of the trade broke.

There’s this thing that Gregg Popovich does in San Antonio where he’ll sit perfectly healthy players just to get them some rest in the middle of a long and grueling NBA season and give some significant minutes to their back-ups. While there has been plenty of debate about whether fans should be asked to spend money on games in which their favorite players, perfectly healthy, will not be playing, there really isn’t anybody arguing the effectiveness of giving big-minute guys a day off of work.

After all, the Spurs keep making the playoffs (and having success once they get there) despite a lineup that features some very important players that are, frankly, past their prime as NBA stars. It’s a technique that could do some organizations a whole lot of good. In fact, somebody should tell Tom Thibodeau all about it.

Former Popovich assistant Mike Budenholzer, who is now the head coach for the East-leading Atlanta Hawks, doesn’t need to be told about this strategy. He knows all about it and is now employing it about halfway through this stellar season with the Hawks.

Atlanta Hawks sharpshooter Kyle Korver is on pace to make history this season. This may come as a shock to many casual basketball fans, considering Korver isn’t exactly a household name and he’s a 12-year NBA veteran whose game should be showing signs of decline at 33 years old. But the League-Pass-obsessed basketball junkies aren’t surprised by this because they’ve seen firsthand that Korver has been an absolute monster this year and a key reason for the Hawks’ unexpected dominance.

Locked In: The Vision Behind Snell’s Unbreakable Eye Contact

Tony Snell glanced up – and never looked back down.

Snell’s unbreakable eye contact is hard to miss in the Chicago Bulls’ locker room. Once he engages in a conversation, he stays zoned in on the person he is speaking with and gives his undivided attention. In a space full of distractions — chattering teammates, film on the screen, the bustle of pregame routines — he heeds a lesson he has embraced for most of his life.

‘Look me in the eye when you talk to me,’ Snell’s grandfather, Cedric Brown, emphasized to him.

“It showed you respect the other person,” Snell explained to Basketball Insiders.

Brown, a Vietnam War veteran, helped raise Snell with a strong set of values and manners. When Snell was six years old, Brown spoke to him about the importance of eye contact. The conversation resonated, but the interaction was challenging at first for Snell, who says he was born a quiet person.

In the last two seasons, Chicago Bulls head coach Tom Thibodeau has arguably done more with less than any head coach in the league. Derrick Rose, Thibodeau’s star player who won the Most Valuable Player award his first year with the team in 2010-11, played in just 10 (regular season) games due to knee injuries, yet Thibodeau found a way to keep the Bulls relevant in his absence. They went 45-37 in 2012-13 while advancing to the Eastern Conference Semifinals, and faired even better in the regular season last year with a 48-34 mark, but were one-and-done in the postseason. This was all while dealing with the distraction over Rose’s status, All-Star forward Luol Deng being traded in a salary dump and using career backups as starters in Rose’s place.

With Rose finally healthy, a marquee addition in Pau Gasol and one of the deepest frontlines in the league, the Bulls were expected to be one of the favorites in the Eastern Conference this year. At times, they’ve looked like just that. However, they’ve reached somewhat of a tipping point here midway through the season. Losing six of their last eight games forced Rose to blast the team’s chemistry and effort.

With the All-Star starters to be announced Thursday, the annual controversy over the rosters is in full swing. But the game itself is an exhibition with little intensity until the final few minutes. All-Star selections serve their purpose of commemorating the best players of a given (half) season and allowing fans to see their favorite players. But what if there were something really at stake? What would the best possible real team assembled from each conference look like?

While it may seem overly simplistic, the philosophy of team-building can be summarized in a similar but more detailed version of the team ratings on a video game. A team should be constructed not merely to get as many of the best players on one squad, but so that the overall roster (and best lineups) get as close to the maximum on all the possible elements of team quality as possible.

Those key elements, in as much brevity as possible:

The John Wall era with the Washington Wizards has been filled with varying degrees of success. For the first three seasons Wall and the Wizards languished in the lottery, failing to record 30 victories in any campaign. But things are on the upswing for the franchise. The team reached the playoffs in 2014, advancing to the second round, and are on pace to notch 56 wins this season.

Things are indeed looking up. For his efforts at the top of the ship, Wall has received the maximum contract, mainstream respect and All-Star recognition fit for a franchise’s leading man.

On the flip side, unheralded forward Kevin Seraphin has been with Wall for each step of the Wizards’ evolution. Seraphin was selected with the No. 17 overall pick of the 2010 draft (Wall was selected No. 1 overall) by the Chicago Bulls and promptly shipped to the Wizards in a draft day deal.

When you start typing Joe Alexander’s name into Google, the site tries to finish the search for you by adding the word “bust.”

The fact that this is the first suggested search for Alexander bothers the former NBA lottery draft pick, because he hates that the label has been attached to him.

Alexander, once considered the most athletic prospect in the 2008 NBA Draft before going to the Milwaukee Bucks with the eighth overall pick is constantly reminded that he didn’t live up to expectations in the NBA.

Alexander was selected ahead of players such as Serge Ibaka, Brook Lopez, Roy Hibbert, Nicolas Batum and Ryan Anderson among others. But he appeared in just 67 games in the NBA, suiting up for the Milwaukee Bucks and Chicago Bulls over one and a half seasons, before he was out of the league.

He knows many people look at him as a failure, but he believes the Bucks are just as much to blame for his struggles.

There have been quite a few unexpected twists halfway through the NBA season. As of today, the Oklahoma City Thunder would not make the playoffs, the Los Angeles Clippers and San Antonio Spurs are in the bottom four of the Western Conference playoff race, the New York Knicks are a league-worst 6-36, the Milwaukee Bucks have a similar record to LeBron James’ Cleveland Cavaliers and the Atlanta Hawks are the cream of the crop in the Eastern Conference.

These are some of the surprises in the standings, but there have also been some big surprises on an individual level. For example, we have recently seen breakout performances from young centers like Jusuf Nurkic and Hassan Whiteside, and significant overall improvements from players like Jimmy Butler and Draymond Green. Here we explore some of the most surprising statistics through the first half of the NBA season:

The 2008-09 season was supposed to be a fresh start for the Knicks. They had finally fired Isiah Thomas and parted ways with Stephon Marbury. Donnie Walsh had been brought in to right the ship and he lured Mike D’Antoni away from Phoenix to coach the team. Walsh had a top six pick in the 2009 draft and selected intriguing sharpshooter Danilo Gallinari.

That Knicks team started off hot (yes, hovering around .500 for the first few weeks of the season equates to “hot” for a franchise that hadn’t won a single playoff game since Bill Clinton was in office). Alas, it wasn’t meant to be as Walsh traded away the team’s most expensive/productive players (Jamal Crawford and Zach Randolph) in order to clear space to make a run at LeBron James in 2010. Those Knicks missed the playoffs again and finished with a 32-50 record that season.

The more things change, the more they stay the same.