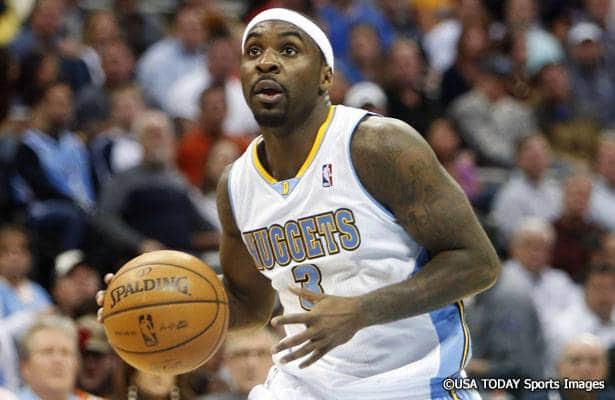 On April 4, 2013, Denver Nuggets forward Danilo Gallinari suffered an ACL tear in his left knee. It was a tough blow for the Nuggets who won 55 regular season games and were one of the most potent offensive teams in the league in the 2012-13 season. Without Gallinari, the Nuggets fell to the Golden State Warriors in the first round of the Playoffs in six games.

Gallinari initially underwent a procedure called the “healing response,” which was developed and performed by renowned orthopaedic surgeon Dr. Richard Steadman. Dr. Steadman utilized this procedure, rather than a complete repair of the ACL, because Gallinari’s ACL was not completely ruptured, but severely compromised. The healing response is an “arthroscopic procedure (that) involves making three to 10 small ‘microfracture’ holes in the bone at the femoral origin of the injured ACL.” This creates a blood clot that should reattach the ligament to the bone. The upside to the procedure is a quicker recovery, while the downside is it only has a 77 percent success rate. Gallinari was not part of that 77 percent, and eventually required a complete ACL reconstruction on January 21, 2014, which cost him all of last season. Gallinari missing the entire season, along with a multitude of other injuries to his teammates, caused the Nuggets to miss the Playoffs, finishing with a 36-46 record.

What’s Next For The Hawks?

By now you may have already heard that Atlanta Hawks controlling owner Bruce Levenson has announced his intention to sell his interest in the team after an e-mail from 2012 surfaced during an internal audit by one of the other minor owners.

According to Brian Windhorst of ESPN, Levenson’s e-mail surfaced after the team hired an Atlanta law firm to conduct an investigation after an internal scouting report which included racist remarks was read aloud by GM Danny Ferry during a discussion about a potential free agent, being reported to be Luol Deng. The comments prompted one of the owners to call for an investigation into the Hawks research and internal documents on players.

According to Windhorst, the investigation included 19 interviews with personnel and a review of more than 24,000 documents, which included Levenson’s e-mail. The e-mail was turned over to the NBA by the team.

So what’s next for the Hawks?

Los Angeles Lakers head coach Byron Scott is starting to get settled into his new position, the one he’s wanted for years. It wasn’t until over two months after his initial interview for the head coaching job that the Lakers officially decided to hire the former Laker, who won three championships with the Showtime Lakers in the 1980s and played 11 seasons with the franchise overall. By the time he was hired, the roster was basically complete and although there was plenty of changes, the overall talent level is not much different from last year’s historically woeful 27-55 campaign.

That’s created a daunting task for Scott going into his first year as the Lakers’ head coach, especially considering how much better of a place they were in the last two times he was without a job. He may not be taking over at the ideal time, but he has a plan in place to lead them through this rebuilding process and back to contention.

Are You Rushing To Judgment on Danny Ferry?

Atlanta Hawks president of basketball operations and general manager Danny Ferry has recently come under fire for making racially inappropriate remarks during a team conference call in June regarding forward Luol Deng – who was headed toward unrestricted free agency.

Ferry, who was reading verbatim from various scouting reports on Deng prepared by third parties, failed to self-edit the commentary when addressing his audience, which included Hawks minority owner Michael Gearon, Jr.  In the meeting’s aftermath, Gearon sent a letter to Hawks controlling owner Bruce Levenson requesting him to take “severe action against” Ferry for the remarks.

Gearon’s letter helped spark an internal investigation which ultimately led to a 2012 email, sent by Levenson, being uncovered filled with racially insensitive comments regarding African-Americans who attend Hawks games.

Levenson has recently announced his intention to sell his stake of the franchise. On flip side, there are many who believe ushering Ferry out the door is best for the franchise in the long run.

Will the Hawks Fire Danny Ferry?

The reports regarding Danny Ferry’s comments about Luol Deng just keep getting worse. On a conference call with Hawks executives and owners, Ferry reportedly described then-free-agent Deng in a disgustingly racist way that has many people outraged.

“He’s a good guy overall, but he’s not perfect. He’s got some African in him. And I don’t say that in a bad way,” Ferry said, according to reports. “He’s a guy who would have a nice store out front, but sell you counterfeit stuff out of the back.”

Rather than stopping there, Ferry continued on the call, describing Deng as someone who was not to be trusted.

Australia evoked much consternation after its 91-83 loss to Angola put it third place in Group D and allowed it to theoretically avoid the US until the semifinals.  SI’s Ben Golliver did an excellent job detailing some of the questionable aspects of the game, which certainly included resting Australia’s best players and may have included intentional in-game tanking to allow Angola to win.

Many have blamed the format of the tournament rather than the Boomers themselves, arguing they merely responded to incentives that were too powerful to ignore with the brackets set out ahead of time.  That is certainly the case; anyone with half a brain could project before the tournament that with the US certain to finish first in Group C, the spots to get were second and fourth in Group C and first and third in Group D to avoid the US until the semifinals.  A similar calculus applied to avoiding Spain in Groups A and B.

The predictability is what enables (some would say compels) tanking into certain positions to avoid the strongest teams as long as possible.  The solution is to take away that predictability, through one of several systems.

A good majority of the most important records in the book obviously are held by the game’s most important players. Wilt Chamberlain’s 100 points in a single game, for example, still holds up all these years later, as does his 55 rebounds in a single game. John Stockton is the all-time assists leader, Kareem Abdul-Jabbar is the all-time points leader and Bill Russell has more championship rings than anybody else in history. All of those records make sense.

Other record-holders are a little more surprising. There are plenty of players who have carved out spots for themselves in league history by breaking certain records, and the following are the most unlikely of them: