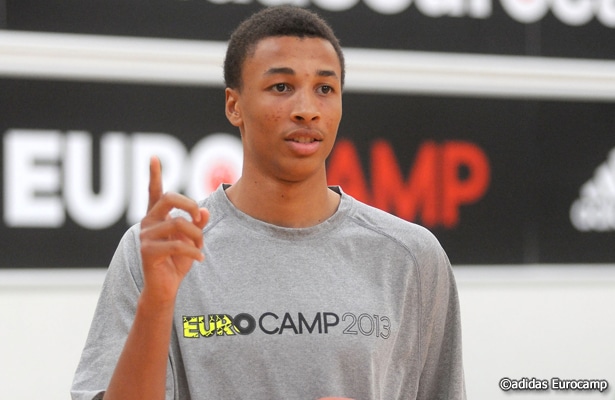 Normally, rumors of this nature are spurred on by success-thirsty fan bases that can be amusing, as they generally have the same immediate reaction of *insert player X* as a “future Laker” regardless of realities like cap space and things like draft position. This, eerily similar to a situation just about two decades ago, is something entirely different.

»In Related: Why Dante Exum is a Top Draft Prospect

While Exum may not be receiving quite the fanfare of presumed top picks Andrew Wiggins, Joel Embiid and Jabari Parker, he has managed to capture the attention of NBA scouts, coaches and even players without the immediate accessibility and constant attention from the cameras since he’s in Australia.

Exum signed with Rob Pelinka, who also represents Kobe Bryant, and while this could be seen as a coincidence, the more you look into his story, the more you realize just how serious he is about being a Laker someday. While Bryant wasn’t Pelinka’s client at the time of the 1996 NBA Draft, the two of them do have more than a decade-long relationship at this point.

There were plenty of paralleling stories surrounding Lakers’ eventual draft-day acquisition of the then-17-year-old Bryant, but the most intriguing storylines include reports of Bryant’s representatives essentially warning other teams they would regret drafting him if they chose to, and the rumor of former Lakers GM Jerry West reportedly telling select people he felt Bryant could end up being the “best player to ever play” the game based upon his pre-draft workout.

One of the main reasons that Exum signed with Pelinka is because he wants to develop a relationship with Bryant to pick his brain. He’s jumping to the NBA straight out of high school and wants advice from Bryant. He also wants to know how Bryant has managed to have such a successful career.

“I just want to know his work ethic, what he’s done to be where he is at the moment, because he’s definitely in the talk of one of the greatest of all-time,” Exum said of Bryant. “So I want to just pick his brain, what he’s done, how he’s adapted over the years and still been able to average over 20 points in the league.”

It’s easy to see what NBA decision-makers are excited about with Exum when watching scouting videos like this:

As the scouting report video shows, courtesy of the great team at DraftExpress.com, Exum’s game is still understandably raw (given his age), but shows signs of great potential and the type of dedication and focus NBA teams would move mountains in order to obtain.

»In Related: Executives in Love with Joel Embiid

Exum also mentioned the Orlando Magic as a good fit, but he made it clear that the Lakers were “the best option” for him.

We are still months away from the 2014 NBA Draft (Thursday, June 26) and so much can (and likely will) change between now and then, so we’ll have to wait and see how things shape up. That said, for Lakers fans, and perhaps even in a small way for the Lakers’ organization, it must be nice to hear these types of statements from an up-and-coming prospect.