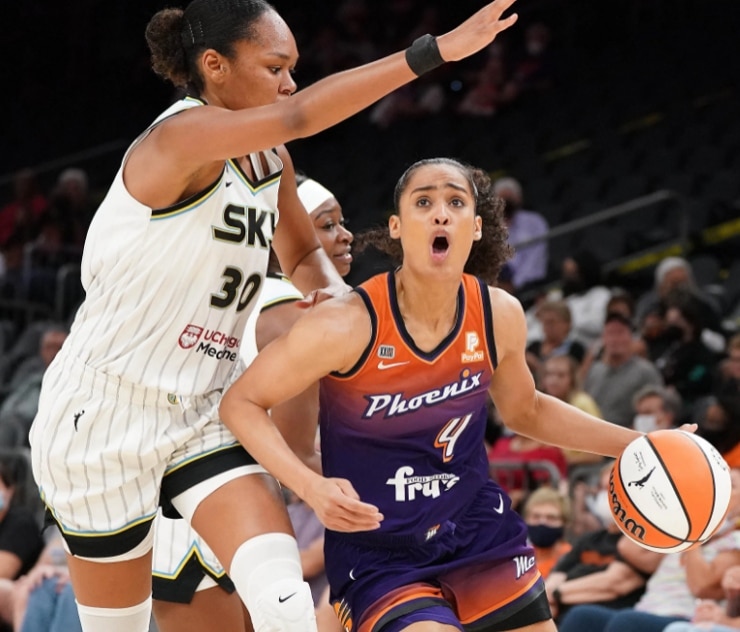 On Thursday, Sept. 30, 2021, the Chicago Sky are playing against the Connecticut Sun and the Phoenix Mercury are facing the Las Vegas Aces; free WNBA expert playoffs picks are available. Tomorrow, Game 2 of the semifinals will begin.

The Sky-Sun matchup starts at 8 p.m. ET. Afterwards, the Mercury-Aces contest begins at 10 p.m. ET. Both Game 2 contests will air live on ESPN2. Bovada game line odds are down below.

In Game 1, Chicago upsetted Connecticut, winning 101-95 in double-overtime. That was a big win for the Sky. The Sun appeared rusty at times. Leading into the series, the Sun were seven-point favorites in Game 1. Likewise, the Sun are 7.5-point favorites for Game 2. Connecticut’s loss snapped their 14-game winning streak.

In the Sun’s six-point loss, forward Jonquel Jones had 26 points, 11 rebounds and 4.0 assists in 45 minutes played. Center Brionna Jones ended her night with 22 points, 10 rebounds and 1.0 assist. That was one of the best WNBA games ever played. In other news, there are no reported injuries for either team.

For notable betting trends, Chicago is now 6-4 in the team’s last 10 games played versus Connecticut. They are also 4-1 straight up in their past five games, 4-2 ATS in their previous six road games and the total has gone over in four of the team’s last five away games.

As for the Sun, they are 12-1 SU in their past 13 games and 10-1 SU in their previous 11 home games. Not to mention, the total has gone under in 10 of Connecticut’s last 14 games played at home. For one significant betting trend, the Sun are 1-6 ATS in their past seven home games against the Sky.

In summary, pick the Sun to win Game 2, but the Sky will cover the spread. The total will go over 155.5. Was the first playoff meeting a fluke? Only time will tell. Other free WNBA expert playoffs picks can be found here.

In Game 1 of the semifinals, the Aces defeated the Mercury 96-90. While not as dramatic or action-packed as the Sky-Sun double-overtime thriller, it was still a competitive game. In the first quarter, Phoenix scored 30 points, earning a nine-point lead over Las Vegas. Though, the Mercury struggled to generate enough points in the second and third quarters. The Aces were 5.5-point favorites for Game 1, and they won by six-points.

Moreover, as for the Aces, guard Riquna Williams finished her performance with 26 points, 4.0 rebounds and 2.0 assists in 33 minutes. Kelsey Plum had an excellent game as well, putting up 25 points, 1.0 rebound and 3.0 assists in 26 minutes played. Regarding injuries, the Mercury have none, whereas Aces forward Angel McCoughtry is listed as questionable to play.

Upon further review of the Aces’ betting odds trends, they are 2-4 ATS in their last six games. Furthermore, Las Vegas is 5-0 SU in the team’s past five games, the total has gone over in five of their previous seven games and the Aces are 7-18 in the team’s last 25 games against Phoenix.

Despite the Mercury’s history of winning versus the Aces, pick Las Vegas to win again. Phoenix will cover the spread and the total will go under 171. Other free WNBA expert playoffs picks can be read on the main page of Basketball Insiders.