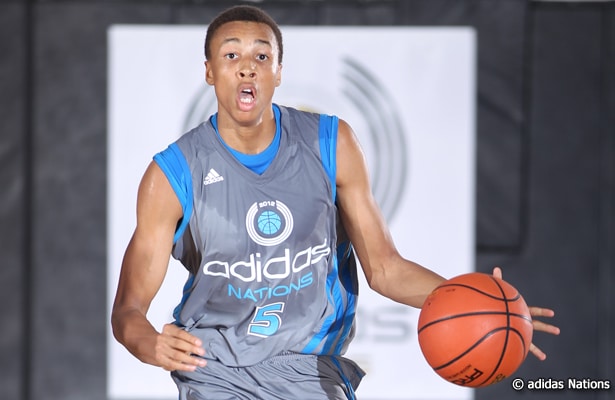 Australian NBA prospect Dante Exum has already caused a great deal of debate among analysts and fans, and he hasn’t even set foot on the court for a pre-draft workout yet. Just as there are plenty of believers in the somewhat limited (but highly impressive) footage and statistics we have available on Exum, there are many who believe we need to see the 18-year-old phenom against stronger competition before determining whether he is worthy of a top five pick in the upcoming 2014 NBA Draft.

Highly regarded former college basketball coach and current ESPN analyst Fran Fraschilla is one of the few who has seen Exum play against stronger competition on more than one occasion. Fraschilla offered his views on the 6’6 guard during a recent interview with 710 ESPNLA’s John Ireland.

“He reminds me of a young, 1982 circa North Carolina Michael Jordan,” Fraschilla said of Exum. “He’s not going to be as great, obviously, unless I’m wrong… but he kind of reminds you of a young colt that’s just about to run his first claimer race, and you’re looking at him (thinking), ‘This guy could win the Kentucky Derby someday.’”

Obviously, he’s not comparing Exum to the Jordan that finished a legendary NBA career with six titles. There’s certainly no need to place that type of added pressure and increased expectation on any young player, but Fraschilla is drawing a direct parallel to what he sees in Exum and what he saw out of an 18-year-old Jordan as a freshman at North Carolina.

“He’s got great basketball instincts,” Fraschilla said. “He’ll drive in, and when you think he’s going to use his right hand, he’ll switch to the left hand at the last minute. He’ll take off about a half step earlier than you think he should, but then he’ll hang in the air and bank it off the glass…Getting your own shot in the league is a skill.”

High praise of that nature, whether you agree, is certain to turn a few heads and raise an eyebrow or two when it comes from someone as respected as Fraschilla, and he certainly didn’t back away from his praise of Exum when asked about his actual draft stock.

“If I had to pick today, it would be in some order of Joel Embiid, Jabari Parker and Dante Exum,” Fraschilla concluded.

Part of why Fraschilla is so impressed with Exum is a result of how he performed at the 2013 Nike Hoop Summit. Exum was able to showcase his all-around game against a team that boasted Duke’s Jabari Parker, Kentucky’s Aaron and Andrew Harrison and Julius Randle, and Arizona’s Aaron Gordon.

Exum turned even more heads just a few months later, when he led Australia to an impressive win over Spain at the FIBA Under 19 Men’s tourney in Prague. He was absolutely dominant in the quarterfinal game, notching 33 points, five rebounds, four assists and four steals.

The footage from these clips makes it easy to see why scouts have also compared Exum to players like Russell Westbrook and Derrick Rose. Not only is he lightning quick with the ball in transition, but Exum’s first step has him routinely attacking the paint and rim in the halfcourt set as well.

Perhaps a slight difference between his game and that of a young Westbrook and particularly Rose is that Exum already appears to have an outside game. His jump-shot is smooth, and he appears to have the ability to comfortably rise above a defender off the dribble and hit catch-and-shoot opportunities.  He even appears to be able to handle the pick-and-roll effectively, which should please a growing number of coaches.

Fraschilla is not in the business of throwing out hyperbole or ranking a player that high just for the sake of grabbing a headline, so these are not words to be taken lightly. Praise and limited footage aside, Exum should have plenty of opportunities to prove himself during the pre-draft process. Reportedly already working out in Southern California in preparation for that early-to-mid June period, Exum can expect to hear from many lottery teams.

Whether he’s truly worthy of some of the recent hype will soon be known, when everyone will have the opportunity to judge his game for themselves. It doesn’t appear that Exum will by shying away from that spotlight anytime soon.